'For your political gains, you should not play into the hands of anti-national forces' 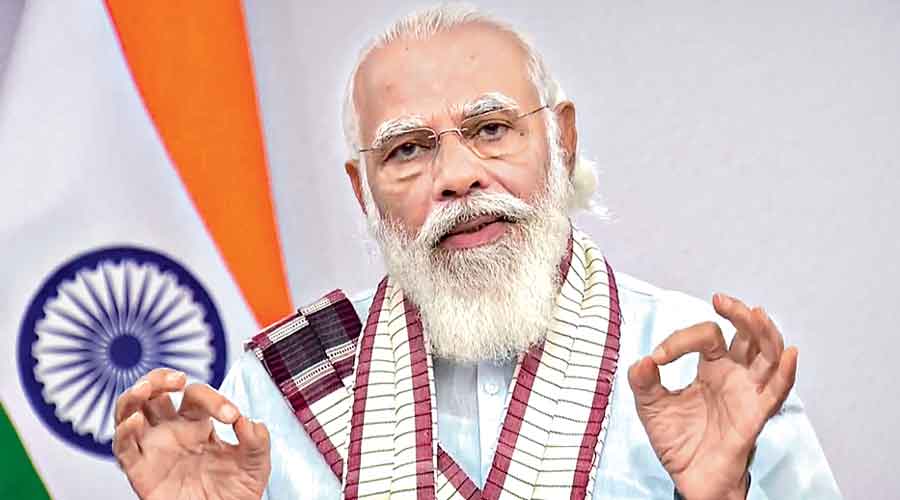 Modi also said that when the entire nation was mourning the brave soldiers' death in Pulwama attack, some people indulged in "dirty politics" for their political gains.
PTI file picture
Our Bureau, Agencies   |   Kevadiya   |   Published 31.10.20, 02:15 PM

Prime Minister Narendra Modi on Saturday said the truth of last year's Pulwama terror attack, in which 40 CRPF personnel were killed, has been accepted in Pakistan Parliament.

His statement comes two days after Pakistan's Science and Technology Minister Fawad Chaudhry admitted his country's role in the Pulwama attack during a debate in their National Assembly (Parliament).

Modi also said that when the entire nation was mourning the brave soldiers' death in Pulwama attack, some people indulged in "dirty politics" for their political gains.

Without mentioning China, the prime minister said that Indian soldiers are giving a befitting reply to those eyeing to grab the country's land.

He was speaking at Kevadiya in Gujarat's Narmada district after paying tributes to Sardar Vallabhbhai Patel at the Statue of Unity on his 145th birth anniversary.

"The country cannot forget the unwarranted statements made after the Pulwama attack. Dirty politics laced with selfishness and arrogance was at its peak when the country was suffering from immense pain," Modi said.

"But the real face of such people has been exposed after the truth was accepted in the Parliament of our neighbouring country," he said in his address on the occasion of Rashtriya Ekta Diwas.

During a debate in Pakistan's National Assembly on Thursday, Chaudhry had said, "Humne Hindustan ko ghus ke maara (We hit India in their home). Our success in Pulwama, is a success of this nation under the leadership of Imran Khan. You and we are all part of that success."

The PM said he remained silent despite all the "accusations and filthy words" used against him after the Pulwama terror attack.

"Politics done after Pulwama attack shows that people can cross any limit for their political gains. I want to urge such political parties not to indulge in this kind of politics as it affects the morale of our security forces," he said.

"For your political gains, you should not play into the hands of anti-national forces, knowingly or unknowingly," he added.

Against the backdrop of terror attacks in France and criticism being faced by its President Emmanuel Macron over a cartoon row, Modi said it was a matter of concern for the entire world how some people have come out in support of terrorism.

"In the present situation, all the nations, all the governments and people of all the faiths must get united against terrorism. Peace, brotherhood and respect for each other is the identity of humanity. Terrorism and violence is not good for anyone," he said.

India understands the pain of terror victims very well, as terrorism has taken lives of thousands of Indian soldiers and citizens over the years, the PM added.

Stressing that the world needs to get united against terrorism, Modi also called for fighting all those forces that support it.

On the issue of securing borders, Modi said the country's soldiers now have the capability to give a befitting reply to the enemies.

"India is building hundreds of kilometers of roads, bridges and tunnels near our borders. The country is committed and well-prepared to protect its honour and sovereignty," he said.

On the occasion, Modi remembered all those police personnel, who sacrificed their lives while serving the society during the coronavirus outbreak.

"When other countries are still struggling, 130 crore citizens of India came together to give a united fight against the pandemic. As a result, India is coming out of the coronavirus outbreak and marching ahead," he said.

He said Jammu and Kashmir's "unification" with India completed one year as his government scrapped Article 370 a year ago.

Modi said that Sardar Patel would have resolved the Kashmir issue had he been allowed to do so.

"I am fortunate for getting the opportunity to complete the unfinished task of Sardar Vallabhbhai Patel. Now, Kashmir has embarked on its journey of development," he said, adding that efforts were also being made for bringing peace and prosperity in the north-east region.

"The country saw the extension of that yagya in Ayodhya. The country witnessed the Supreme Court ruling on Ram temple, and people are now witnessing the construction of a grand Ram Mandir," he said.

Stressing the need for unity and developing the spirit of 'India First', Modi mentioned a poem written by well-known Tamil poet and freedom fighter Subramania Bharathi.

Remembering Sardar Patel, who united the country after the British left, Modi said, "We should always remember that the interest of the country is paramount for all of us and only it will lead us to the path of progress."

He also remembered Maharishi Valmiki on his birth anniversary.

The PM said it is Valmiki's depiction of Lord Ram that connects every citizen living in different parts of the country.