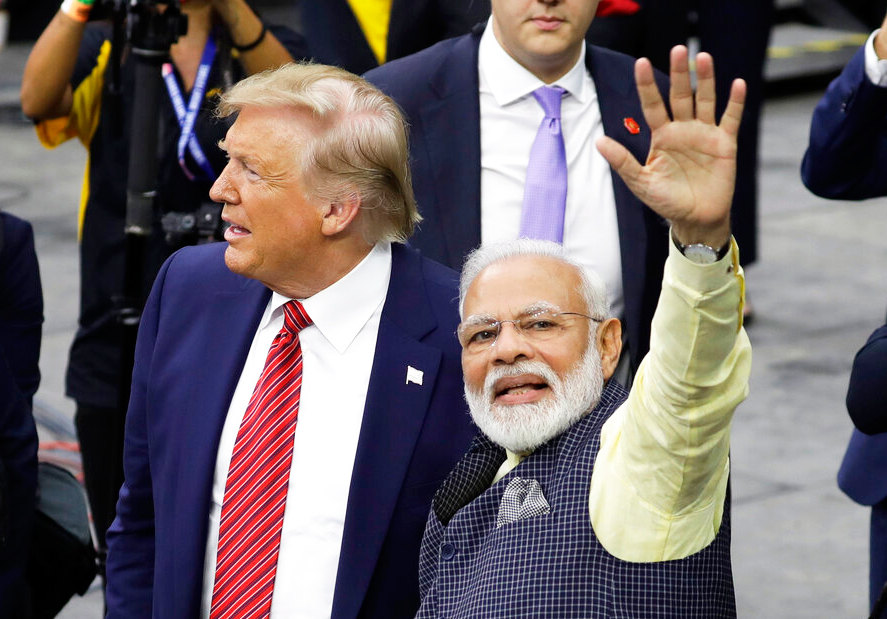 The telephonic conversation between President Trump and Prime Minister Modi came in the backdrop of escalating tensions in the Gulf region after the US killed top Iranian commander General Qasem Soleimani in a drone strike in the Iraqi capital of Baghdad.

Monday's telephonic call was the first contact between the two leaders this year and possibly the first for President Trump with an international leader on his return to the White House after his year-end vacation at his resort in Mar-a-Lago in Florida.

While in Florida, Trump authorised the drone strike on the commander of Iran's powerful Revolutionary Guards General Soleimani on Friday, killing him on the spot.

'Today, President Donald J. Trump spoke with Prime Minister Narendra Modi of India to exchange New Year's greetings,' the White House said in a readout of the call between the two leaders on Monday.

'The leaders discussed ways to further strengthen the United States-India strategic partnership in 2020, and they also reviewed the regional security matters,' the White House said.

In its readout, the White House did not elaborate the 'regional security matters' discussed by the two leaders.

The conversation between Trump and Modi came a day after external affairs minister S. Jaishankar held a telephonic conversation with US secretary of state Mike Pompeo and voiced India's concerns over the escalating tensions in the Gulf region after the killing of Soleimani, the head of Iran's elite al-Quds force.

Observers say it would not be a surprise if the latest developments in Iran did not figure during the telephonic conversation between the two leaders as it was the first phone call between Prime Minister Modi and President Trump after the killing of Soleimani.

The US action has resulted in an unprecedented escalation of tension between Washington and Tehran as well as heightened international concern and rattled global financial markets.

In New Delhi, the Prime Minister's Office (PMO) said in a statement on Tuesday that Prime Minister Modi spoke with US President Trump and expressed his desire to continue to work with him to enhance cooperation in areas of mutual interest.

Modi conveyed his New Year greetings to the US president, the statement said.

During the conversation, the Prime Minister noted that India-US relations, which are built on trust, mutual respect and understanding, 'have grown from strength to strength', it said.

Modi highlighted the significant progress made in deepening the strategic partnership between India and the US in the previous year and expressed his desire to continue to work with President Trump for enhancing cooperation in all areas of mutual interest, the statement said.

President Trump wished the people of India prosperity and progress in the New Year.

He expressed satisfaction at the achievements in the relationship in the last few years and reiterated his readiness for further deepening bilateral cooperation, according to the statement.

Reacting to the killing of Soleimani, India on Friday said the increase in tension has alarmed the world and asserted that peace, stability and security in the region is of utmost importance to it.

In a statement, the external affairs ministry said India has consistently advocated restraint and continues to do so and it is vital that the situation does not escalate further.

The killing brought fears that long-standing tensions between the US and Iran could spiral into a major conflict.

Soleimani was widely considered the second most powerful man in the Iran behind Supreme Leader Khamenei. The US saw him as a terrorist.

While top Iranian leaders have vowed of 'severe revenge' for assassinating Soleimani, President Trump has warned Iran that the US has identified 52 possible targets in the country if Tehran carries out any attack against America to avenge the killing of top military commander.

In 2019, Modi and Trump, who have developed a personal rapport, met four times, including their joint appearance at the historic 'Howdy Modi!' event in Houston. They spoke over phone at least twice last year.