Journalists gathered at the Press Club of India on Monday to condemn last week's assassination of editor Shujaat Bukhari by suspected militants in Srinagar but also denounced the vilification campaign he had faced on social media from ultra-nationalist trolls. 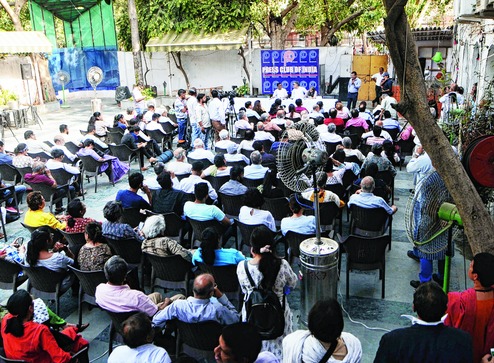 New Delhi: Journalists gathered at the Press Club of India on Monday to condemn last week's assassination of editor Shujaat Bukhari by suspected militants in Srinagar but also denounced the vilification campaign he had faced on social media from ultra-nationalist trolls.

The Wire's founding editor Siddharth Varadarajan compared the threat journalists faced in big cities with the pressures under which people like Bukhari functioned.

"Today you have a situation where state agencies are trying to dictate to us what good journalism is and what isn't.... Here you can brush it aside and laugh at them," he said.

Varadarajan added: "Long before Shujaat was assassinated, his character was assassinated multiple times over by people on social media and people in the big media in India and Pakistan.

"We need to understand that vilification on social media, vilification in the media has real-life consequences. When a person like Shujaat Bukhari, with all the reason and rationality and good sense at his command, can be labelled on Indian big TV channels as 'soft separatist', 'pro-terrorist', 'pro-Pakistani', when an entire life's work can be dismissed in a cavalier fashion by people who know nothing at all about Jammu and Kashmir or the politics and history of this country...'

"What this kind of social media campaign does is that you create space for hidden forces to engage in these kinds of acts of terrorism, not necessarily because they believe the allegations or target Shujaat as an individual, but in this cloak and dagger world of violent extremism, you can commit a crime and have it pinned on somebody else."

Amit Baruah, resident editor of The Hindu, Bukhari's former employer, said: "We will never know who was behind his killing. Al-Safa's editor-in-chief Mohammad Shaban Wakil was killed in Srinagar in 1991. We still don't know who killed him.... The ultimate tribute to him would be for all journalists to do their job diligently and honestly and tell truth to power."

It added: "We demand that the government institute a separate inquiry into those who had launched a malicious campaign against Shujaat. The cyber cell of the Union home ministry should look into all those IP addresses and their sources from where the malicious campaigns were conducted. We feel that such killings are often preceded by hate messages and malicious campaigns on the social media.

"Various journalists and other civilians have been viciously trolled and targeted. All such instances ought to be monitored by a vigilant government if civilian safety and security is a priority in governance."