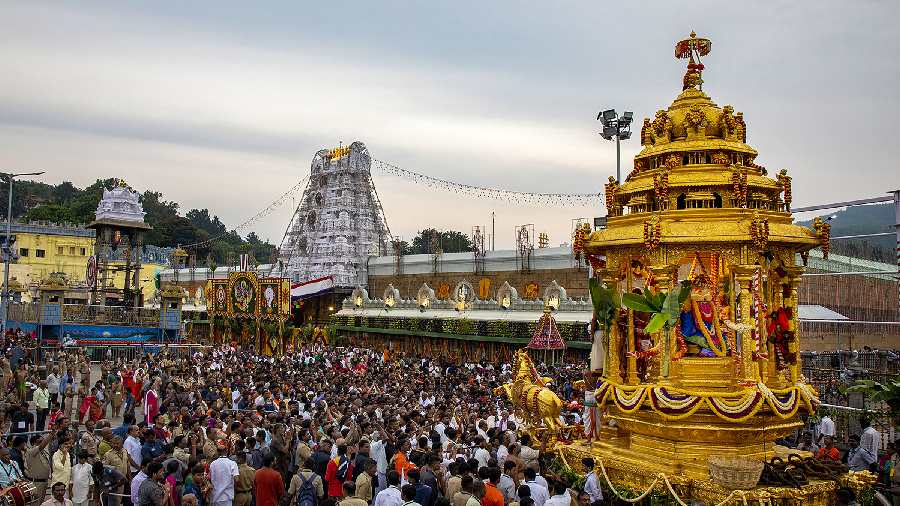 Tirupati's world famous Lord Venkateswara temple's net worth of over Rs 2.5 lakh crore (about USD 30 billion) is more than the market capitalisation of IT services firm Wipro, food and beverage company Nestle and state-owned oil giants ONGC and IOC.

Tirumala Tirupati Devasthanams, keeper of the temple dedicated to Tirupati's presiding deity, for the first time since its founding in 1933 declared its net worth.

At current trading price, the networth of Tirupati temple is more than several blue-chip Indian firms, according to stock exchange data.

Bangalore-based Wipro had a market cap of Rs 2.14 lakh crore at close of trading on Friday, while UltraTech Cement had a market value of Rs 1.99 lakh crore.

Swiss multinational food and drink major Nestle's India unit, with a market cap of Rs 1.96 lakh crore, too was valued below it.

Only about two dozen companies have market valuation larger than the temple trust's networth.

Tirumala Tirupati Devasthanams (TTD) is growing richer and richer as the cash and gold offerings made by devotees at the hill temple continue to rise and fixed deposits in banks are also generating more income in view of increase in interest rates, a temple official said.

The assets owned by TTD include land parcels, buildings, cash and gold deposits in the banks, given as offerings to the temple by devotees.

Assigning a value to priceless antique jewellery and properties including cottages and guest houses on the seven hills to provide amenities to devotees could be misleading and hence does not form part of the estimated general asset value, temple officials said.

The sprawling seven hills are held sacred by devotees and are revered as the abode of Lord Venkateswara.

In its about Rs 3,100 crore annual budget for 2022-23 presented in February, the TTD has projected over Rs 668 crore as income in the form of interests from cash deposits in banks. Also, Rs 1,000 crore income was predicted in the form of cash offerings alone -- by about 2.5 crore devotees -- in the hundi of the hill temple.