The central bank pulled out a new tool from its monetary arsenal called the Targeted Long Term Repo Operations (TLTRO) -– a system that will allow banks to borrow money from the RBI’s repo window for up to three years at a floating rate which is linked to the policy interest rate.
(Shutterstock)
Vivek Nair   |   Mumbai   |   Published 27.03.20, 10:41 PM

The policymakers on Mint Street fired a “bazooka” on Friday when they slashed the policy interest rate by 75 basis points to 4.4 per cent — the lowest level in over 16 years — and granted a three-month moratorium on all corporate and retail loans to ease the pain of borrowers who have been struggling to deal with the crisis in a coronavirus-afflicted economy.

The decisions were taken at an unscheduled, three-day meeting of the monetary policy committee that had been advanced by a week and held in complete secrecy. The monetary policy was supposed to be announced on April 3.

“The RBI has pulled out its bazooka,” Prithviraj Srinivas, chief economist at Axis Capital in Mumbai, said after the surprise announcement.

Friday’s announcement contained a raft of measures that stood in sharp contrast to the Rs 1.7-lakh-crore fiscal side response by the Narendra Modi government on Thursday, which largely repackaged existing welfare measures and involved very little new spending.

The monetary policymakers, who were split four to two on the extent of the interest rate cuts, have sounded fears of a looming recession in the global economy for the first time.

The policymakers first met on March 24 — the day Prime Minister Modi announced a 21-day lockdown to combat the pandemic.

“Clearly, a war effort has to be mounted to combat the virus, involving both conventional and unconventional measures in a continuously battle-ready mode,” RBI governor Shaktikanta Das said. 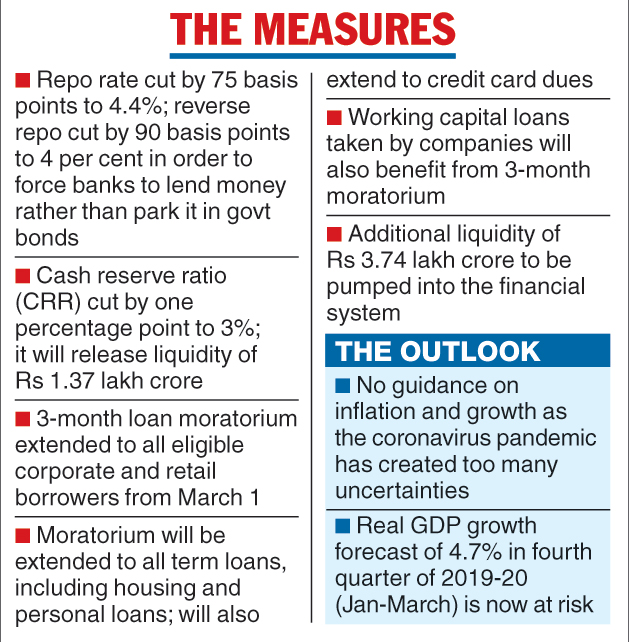 State Bank of India chairman Rajnish Kumar told a television channel that the EMIs on home and personal loans would automatically be deferred by three months and customers need not make any specific application to the bank.

The RBI governor said the deferment will not affect the credit history of borrowers.

Later in the day, the SBI passed on the full rate cut to its customers.

The cash reserve ratio (CRR) was cut by one percentage point to 3 per cent which will immediately pump Rs 1.37 lakh crore into the banking system. The CRR is that portion of bank deposits that banks are required to maintain with the RBI.

There were a couple of other liquidity boosting measures.

The central bank pulled out a new tool from its monetary arsenal called the Targeted Long Term Repo Operations (TLTRO) -– a system that will allow banks to borrow money from the RBI’s repo window for up to three years at a floating rate which is linked to the policy interest rate. This will funnel Rs 1 lakh crore to banks which they can use to increase lending to the stressed sectors in the economy.

The RBI allowed banks to raise more funds under the marginal standing facility (MSF), a window from which banks can borrow funds from the RBI in emergency situations against their excess holdings of government securities.

The relaxation will enable banks to access another Rs 1.37 lakh crore. This credit line will be available up to June 30.

In a rare web address, RBI governor Das said that close to Rs 3.74 lakh crore will be injected into the banking system through the three lending windows.

“There is a rising probability that large parts of the global economy will slip into recession,” said the monetary policy statement, which came a day after US Federal Reserve chief Jerome Powell said in an NBC interview that the American economy, which has been growing at a robust 2.1 per cent, may have to brace for a sharp downturn.

“We may well be in a recession,” Powell said. “But I would point to the difference between this and a normal recession. There is nothing fundamentally wrong with our economy. Quite the contrary. We are starting from a very strong position.”

Fears of a recession in large parts of the global economy have been voiced in recent days as the pandemic swept through Europe and the US.

Governor Das said the National Statistics Office’s forecast in late February that the Indian economy would grow at 4.7 per cent in the fourth quarter (January-March) was “now at risk from the pandemic’s impact on the economy”. 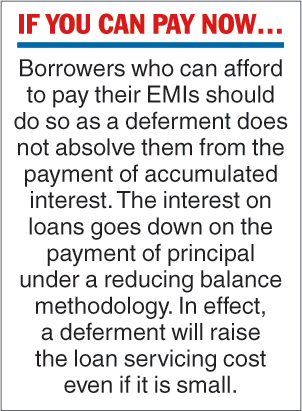 But he still tried to send out an upbeat message to the nation and the authorities in Delhi. “It is worthwhile to remember that tough times never last; only tough people and tough institutions do,” he said.

The monetary policy makers chose not to hazard a forecast on either growth or inflation because of the coronavirus-inspired uncertainties.

The governor tried to quell the mounting concerns about the banking system after the near-collapse of Yes Bank, which was averted after the SBI and a cabal of banks stepped in with a rescue package earlier this month.