Advertisement
Home / India / Those who indulge in politics of falsehood will not understand Mahatma Gandhi: Sonia

Those who indulge in politics of falsehood will not understand Mahatma Gandhi: Sonia

She also said only the Congress has followed Gandhi's path 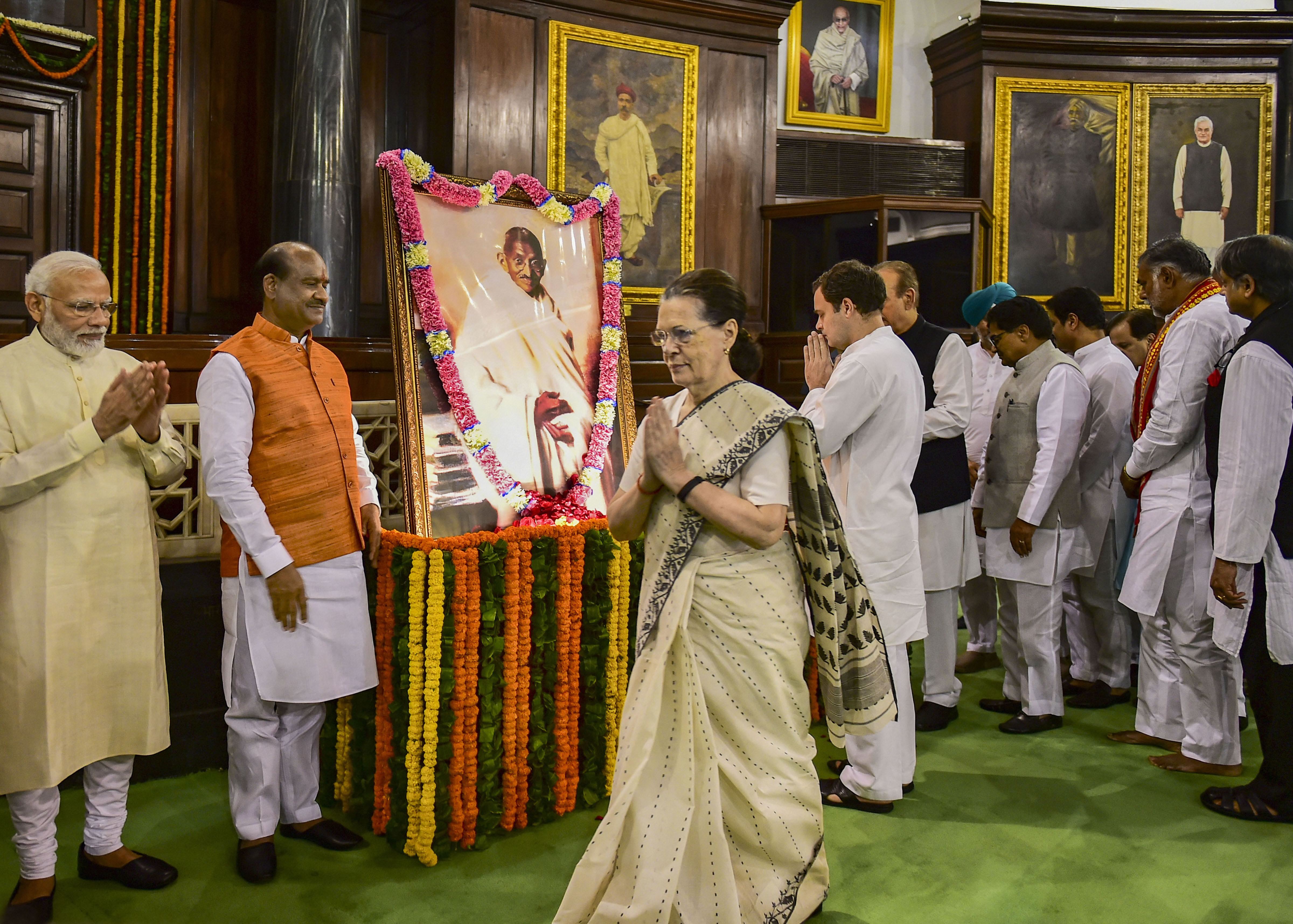 Congress president Sonia Gandhi on Wednesday said those who consider themselves supreme and indulge in the politics of falsehood will not understand Mahatma Gandhi's sacrifices and ideals.

In what appeared to be a swipe at the present BJP leadership, Sonia Gandhi told party workers and leaders at Rajghat that the Mahatma's soul would be pained to see what has been happening in India in the last few years.

Sonia Gandhi also administered an oath on Gandhi's ideals to party workers on the 150th anniversary of Mahatma Gandhi.

Earlier in the day, Congress leader Rahul Gandhi led a march of party workers from the Delhi Congress office at the Deendayal Upadhyaya Marg to mark the occasion.

'How will those who consider themselves supreme understand the sacrifices made by Mahatma Gandhi....Those doing politics of falsehood will not understand Gandhi's philosophy of non-violence,' Sonia Gandhi said in her brief address on the occasion.

Addressing the gathering in Hindi, she said no matter what others might claim, only the Congress has followed the path of Gandhi and has provided jobs, education and facilities to farmers, accomplishments which are unparalleled.

The Congress chief, terming the day as historic, pious and auspicious, described Gandhi as a 'great personality' who inspired not only India but the entire world to adopt the path of non-violence and 'satyagraha'.

She said all are proud that India has attained its present status following the path shown by the Mahatma, noting that it is easy to cite Gandhi's name but difficult to follow the path he has shown.

Sonia said there has never been any dearth of those who tried to distract India from the path shown by Gandhi while citing his name.

'Despite all this, if India has not been distracted it is because its foundation is laid on the values of Gandhiji. India and Gandhiji are synonymous with each other. It is a different thing that some people are adamant on reversing this. They want the RSS and not Gandhiji to become the symbol of India.'

'I want to tell them clearly... there cannot be any thought except Gandhiji's all-inclusive system, that includes the composite culture, civilisation and society of India,' she said.

Sonia Gandhi said the Mahatma wanted India and its villages to be self-reliant. The Congress after independence followed this path and took revolutionary steps in this regard. Be it Jawaharlal Nehru, Lal Bahadur Shastri, Indira Gandhi, Rajiv Gandhi, Narasimha Rao or Manmohan Singh, all struggled to build a new India and establish new paradigms of progress, the Congress leader said.

Echoing her mother's remarks, Congress general secretary Priyanka Gandhi said the BJP should first pursue the path of truth shown by Mahatma Gandhi and then talk about him.

She made the statement before participating in a silent march organised in Lucknow by the Congress on Mahatma Gandhi's birth anniversary.

The silent march is also being viewed as a show of strength by the Congress, which has been on the sidelines of state politics for a long time.

About 80 Congress workers were arrested on Monday at a public meeting ahead of a march they planned in support of the student who has accused Union home minister Chinmayanand of rape.

In an informal chat with media persons just before embarking on the march, she said, 'atrocities are being committed on women and when they raise their voice to fight against them, they are being crushed. We will definitely struggle against it.'

The silent march which started from Shaheed Smarak will culminate at the GPO park, where Congress leaders will pay floral tributes to the father of the nation.

The Congress, along with other opposition parties, have boycotted the 36-hour special session organised by the Uttar Pradesh government on the occasion.

Later, Priyanka Gandhi is also scheduled to interact with party workers and leaders at the UPCC headquarters in Lucknow.

In Delhi, the Congress president said it is unfortunate that farmers are in poor condition, youth are struggling with unemployment, industries are shutting down, women are not safe even in big cities and powerful people committing atrocities are sitting pretty while their victims are being put in jail.

'I want to tell those who decide the country's destiny that Gandhiji is a symbol of love not hatred, he is a symbol of harmony not confrontation, he is a symbol of democracy and not autocracy. No matter what others claim, the Congress is the only party that has followed the principles of Gandhiji and will continue to do so,' she said.

She called upon them to reach out to every street and village in the country like Gandhi did. Only then will 'Bharat' be made, Sonia Gandhi said.

'We need to carry forward the resolve to pay any price to safeguard fundamental honour, ancient dignity, cultural traditions, values of diversity and social harmony of the country. No matter how long or difficult this struggle is, we will follow this path till we emerge successful. I assure you, if the resolve is strong, the destination is never too far,' she said.