Advertisement
Home / India / Those who disagree with us not BJP's enemies, but adversaries: Advani

We have never regarded those who disagree with us politically as ‘anti-national’: Advani 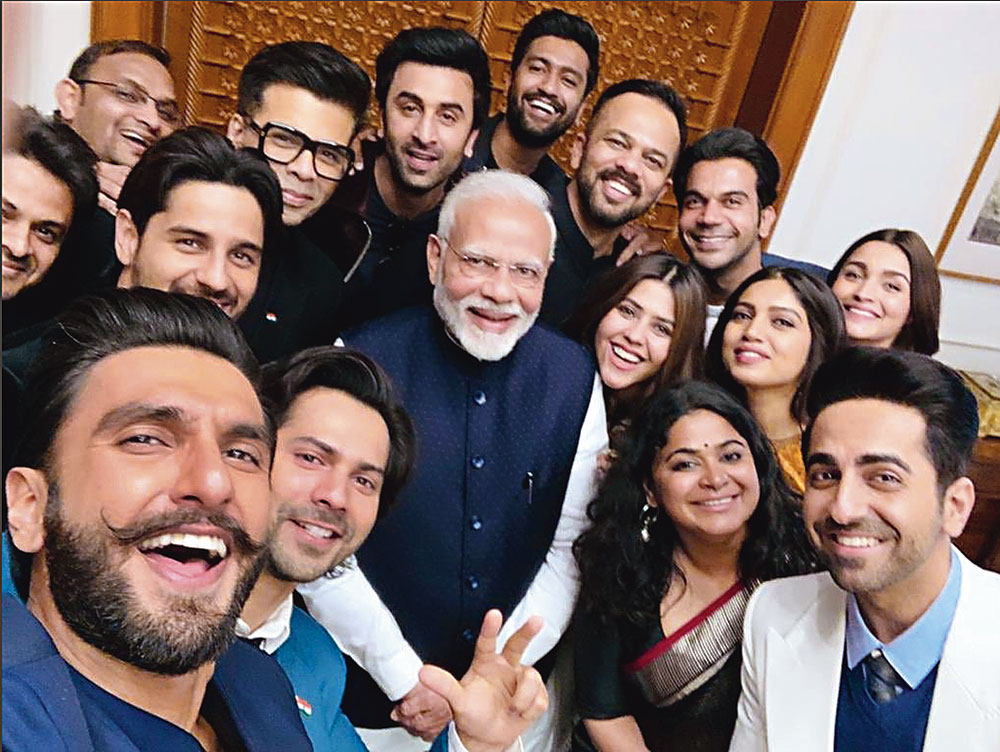 SELFIE FIRST: A January 10 picture shows Prime Minister Narendra Modi with some of the leading figures of Bollywood. The picture was then described as the “selfie of the year”. The group had met Modi to discuss the participation of youth icons from the film fraternity in nation-building.
Image tweeted by Narendra Modi
J.P. Yadav   |   New Delhi   |   Published 05.04.19, 12:02 AM

L.K. Advani on Thursday declared that the BJP had never seen “those who disagree with us” as “enemies” or “anti-national”, appearing to publicly chastise Prime Minister Narendra Modi and party president Amit Shah in the middle of the election campaign.

The sidelined party patriarch, who addressed the message to the “people of India” and “millions of (party) workers” but did not mention Modi or Shah, cited the upcoming “foundation day” of the BJP as the context for his comments.

The statement, posted as a blog on Advani’s personal website and also mailed to the media, was titled: “Nation First, Party Next, Self Last”. This too is being seen as a swipe against Modi, who is accused of practising a personality cult at the expense of the party and the government.

Advani, 92, had not posted a single blog on his page since Modi came to power despite being an active blogger previously. This is also the first time he has commented in public since being denied a party ticket and replaced from the Gandhinagar seat by Shah.

“The essence of Indian democracy is respect for diversity and freedom of expression. Right from its inception, the BJP has never regarded those who disagree with us politically as our ‘enemies’, but as our adversaries,” his statement says.

“Similarly, in our conception of Indian nationalism, we have never regarded those who disagree with us politically as ‘anti-national’. The party has been committed to freedom of choice of every citizen at (the) personal as well as political level.”

While “anti-national” has become the BJP’s standard label for critics, questioners and political opponents under the Modi-Shah duopoly, its rule has been marked by unceasing attacks on people’s dietary habits — matters of the sort of “personal” choice Advani may have had in mind.

His comments came a day after Shah, addressing a rally in Uttarakhand, termed the Congress manifesto “anti-national” for promising “to abolish the sedition law and dilute the Armed Forces (Special Powers) Act”.

He also chided “Rahul baba and his team of anti-nationals” for allegedly being “disappointed” by the Balakot air strikes — charges Modi too has expressed.

The BJP maintained a guarded silence about Advani’s post till Modi himself tweeted his reaction, putting up a brave face.

“Advani Ji perfectly sums up the true essence of BJP, most notably the guiding Mantra of ‘Nation First, Party Next, Self Last,” Modi posted. “Proud to be a BJP Karyakarta and proud that greats like LK Advani Ji have strengthened it.”

But Sudheendra Kulkarni, former political aide to both Atal Bihari Vajpayee and Advani, termed Advani’s statement the “biggest intervention in the 2019 polls”. 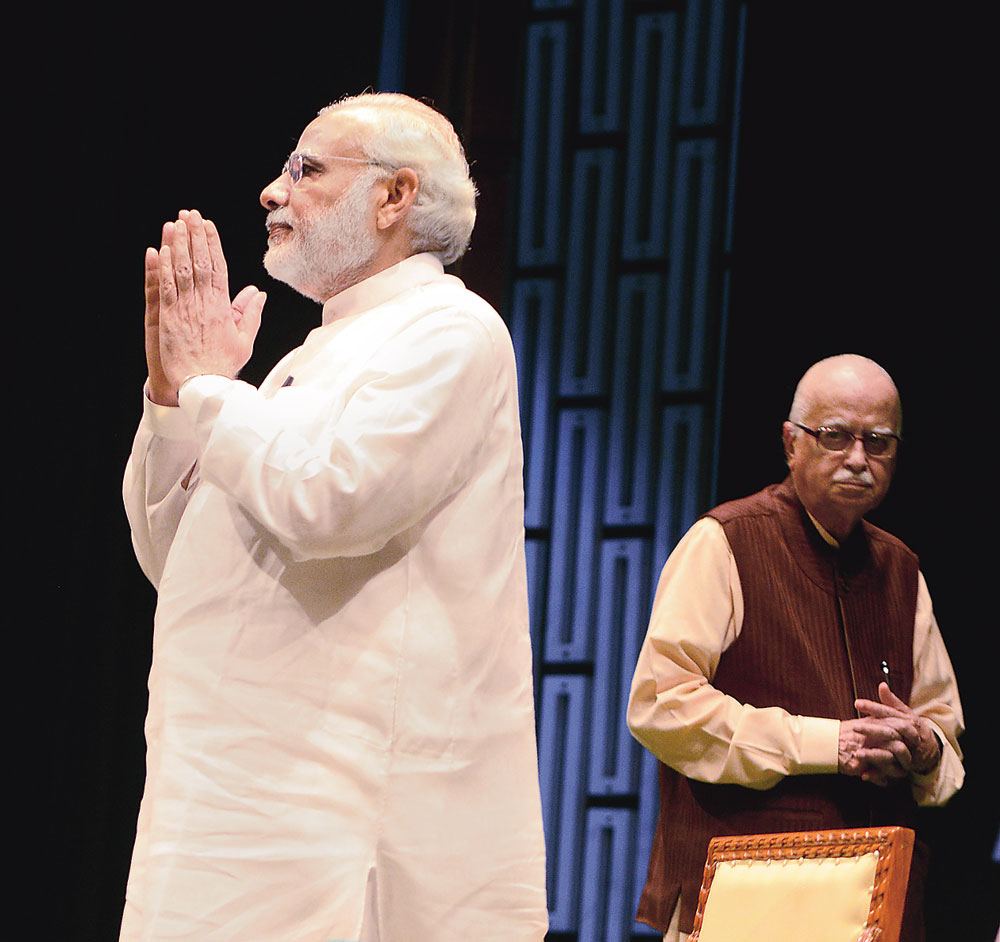 SELF LAST: Modi and Advani at an NDA meeting in the Parliament complex in August 2015. On Thursday evening, Modi responded to Advani’s blog and its title by tweeting: Advani Ji perfectly sums up the true essence of BJP, most notably the guiding Mantra of ‘Nation First, Party Next, Self Last’.
File picture by Prem Singh

“Advani’s statement was a strong rebuff to Modi and Shah who are calling political opponents ‘anti-national’ day in and day out,” Kulkarni, a political analyst who quit the BJP a decade ago, said.

Referring to Advani’s comment that the foundation day was “an important occasion for all of us in the BJP to look back, look ahead and look within”, he said this was the veteran’s way of asking party workers to “introspect whether the party was going in the right direction”.

Mamata Banerjee posted a laudatory tweet: “As the senior most politician, fmr Dy PM and founding father of BJP, the views AdvaniJi has expressed about extending democratic courtesies is significant. Of course, all Opposition who raise their voices are not anti national. We welcome his statement & convey our humble regards.”

Advani, pensioned off by Modi and Shah to the defunct seniors’ club, “margdarshak mandal”, has said that as one of the founders of the BJP, it’s his duty to share his reflections.

Perhaps as an insurance against being dubbed “anti-national” for his implied criticism of the duopoly, he has underlined his association with the BJP’s ideological parent, the RSS, since he was 14. He has stressed that “serving the motherland has been the passion and mission” of his life.

He has also claimed that upholding democratic traditions has been the “hallmark of the BJP” in what appears an oblique allusion to the charges against the Modi government of curbing the independence of constitutional institutions and browbeating the media.

“Defence of democracy and democratic traditions, both within the party and in the larger national setting, has been the hallmark of the BJP,” the statement says.

“Therefore (the) BJP has always been in the forefront of demanding protection of independence, integrity, fairness and robustness of all our democratic institutions, including the media.”

Advani also appears to hint at the lack of transparency in electoral funding, for which the Opposition has largely blamed the electoral bonds introduced by the Modi regime.

“Electoral reforms, with special focus on transparency in political and electoral funding, which is so essential for a corruption-free polity, has been another priority for our party,” Advani has written.

Another sidelined senior, Murli Manohar Joshi, too has been denied a party ticket. Many are expecting a salvo against the Modi-Shah regime from him too.