The rise in production seems largely the outcome of the Rs 410-crore National Saffron Mission (NSM), which the erstwhile UPA Prime Minister had launched in 2010 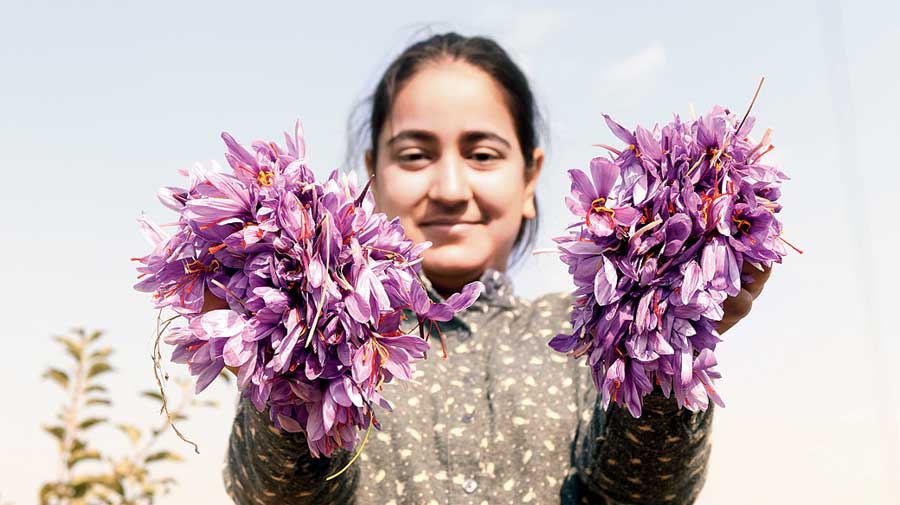 The Valley appears to be witnessing a saffron boom, largely thanks to the Congress. Only, this version of saffron concerns the kitchen more than the polling booth.

While the BJP continues to struggle in Kashmir, a spice emblematic of the Valley and representing the party’s favourite colour is said to have turned a corner after years of poor yields.

Saffron, the world’s costliest spice, fetches Rs 1.5 lakh to Rs 2.5 lakh a kilogram. Its production in Kashmir, the only place in India where it is grown, had been waning for decades because of droughts and the conversion of saffron-growing fields into residential plots.

Prime Minister Narendra Modi had over the years shown an unexpected level of interest in kicking up its production, something many Kashmiris attribute to the symbolism of the colour rather than his love of the spice itself.

Modi must thank his predecessor Manmohan Singh for the recent good news, though, for the rise in production seems largely the outcome of the Rs 410-crore National Saffron Mission (NSM), which the erstwhile UPA Prime Minister had launched in 2010, slowly bearing fruit.

Officials said the Modi government can be credited only for continuing with the programme, and for Kashmiri saffron securing the geographical Indication (GI) tag.

While some officials cited even higher figures, an industry body suggested the actual production should be lower than what Sinha had claimed.

“So far as the production of 13 metric tonnes is concerned, it is the yield from some 2,400 hectares that have been rejuvenated under the mission so far. In all, the mission aims to rejuvenate 3,700 hectares,” Choudhary told The Telegraph.

Official data say that production rose to 13.36 tonnes over this area in 2020 against 1.489 tonnes a decade ago when the mission was launched.

The purported improvement comes seven months after Kashmiri saffron got the GI tag — a boost in the competition with saffron produced in Iran, Spain and other places.

“The GI tag is helping big time. Because of it we introduced e-trading. Lacha saffron would cost Rs 80 per gram last year but is selling at Rs 175-185 now. Similarly, the price of the Mogra variety has shot up to Rs 228 per gram this year from Rs 120 per gram in 2019,” Choudhary said.

Saffron production had peaked in the 1980s, when farmers claim it was around 30 tonnes while government figures cite about half that figure.

“Because of it, production has gone up to 4.5kg-5kg per hectare. In its heyday, production was 6-7kg a hectare, and we aim to achieve that,” he said.

Officials said a Rs 40-crore Spice Park set up under the mission, where saffron is scientifically dried and tested for quality, had been a boon.

However, Ghulam Mohammad Pampori, president of the Kashmir Saffron Growers and Dealers Association, contested all the figures.

“The situation has not changed much on the ground. Drought and disease remain enemies of the crop. They (the government) are only interested in promoting themselves, while the fact is that production per hectare remains what it was a few years ago,” he said.