Advertisement
Home / India / The importance of ‘but’

The importance of ‘but’ 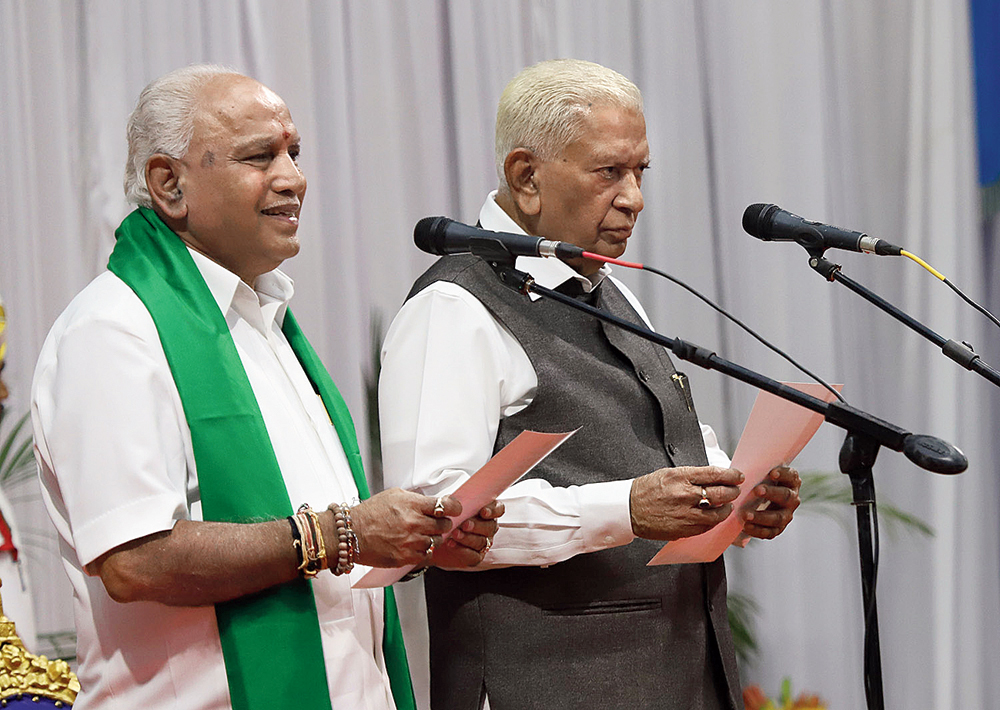 The Supreme Court has upheld the disqualification of 17 rebel lawmakers whose defection set the stage for the so-called “Operation Kamal” in Karnataka but allowed them to contest next month’s Assembly by-elections in the state.

“Operation Kamal” had toppled the JDS-Congress government in Karnataka and facilitated the return of BJP leader B.S. Yediyurappa as chief minister.

The Supreme Court’s endorsement of the disqualification is a slap in the face of the politics of defection that has seen several BJP-friendly governments taking power in multiple states in spite of falling short of majority at the hustings and the party leadership preaching high morals in public life.

But the BJP also received a face-saver with the Supreme Court overturning the decision of the Speaker (a Congress leader) to bar the disqualified MLAs from contesting the elections till the term of the current House ended in 2023. The decision then was seen as a deterrent to would-be defectors who switch sides on the hope of ministerial berths.

Speakers, it said, have no power to go into the “motive” behind the resignation of legislators and must confine themselves to the question whether such resignations were “genuine” and “voluntary”.

The bench of Justices N.V. Ramana, Sanjiv Khanna and Krishan Murari also urged Parliament to bring in a suitable legislation to root out the growing trend of “horse-trading” and “corrupt practices” by strengthening the Constitution’s Tenth Schedule, which deals with the anti-defection law.

The bench said there was a “growing trend” of Speakers acting against the constitutional duty of being neutral. “Additionally, political parties are indulging in horse-trading and corrupt practices…. In these circumstances, Parliament is required to reconsider strengthening certain aspects of the Tenth Schedule, so that such undemocratic practices are discouraged.”

The 17 legislators had submitted their resignations on July 1 and July 11, triggering the fall of the H.D. Kumaraswamy government on July 23, after it failed to establish its majority in the Karnataka Assembly, and culminating in the return of the Yediyurappa government. All 17 are expected to join the BJP on Thursday.

The rebels had challenged Ramesh’s decision to disqualify them later that month although they had submitted their resignations.

They also contended that they were disqualified on the basis of a petition the Congress had filed on February 2, following simmering differences between the rebels and the party.

The court made it clear a legislator had the right to resign. “It is true that (the) 33rd constitutional amendment changed the constitutional position by conferring discretion on the Speaker to reject the resignation. However, such discretion is not unqualified as the resignation can only be rejected if the Speaker is ‘satisfied that such resignation is not voluntary or genuine’,” Justice Ramana, who wrote the judgment, said.

The judge said the determination of whether a resignation was “voluntary or genuine cannot be based on the ipse dixit (whims and fancies) of the Speaker”.

Justice Ramana said:  “When a member tenders his resignation in writing, the Speaker must immediately conduct an inquiry to ascertain if the member intends to relinquish his membership. The inquiry must be in accordance with the provisions of the Constitution and the applicable rules of the House. This satisfaction of the Speaker is subject to judicial review.”

The court said there was nothing in the Constitution, or any statute, that prevented a legislator from resigning.

“A member may choose to resign for a variety of reasons and his reasons may be good or bad, but it is his sole prerogative to resign. An elected member cannot be compelled to continue his office if he chooses to resign,” Justice Ramana said.

The court rejected the argument of senior advocate Kapil Sibal, who appeared for Ramesh, that the Speaker could “go into the motive of the member and reject his resignation if it was done under political pressure”.

“We are unable to accept this contention. The language of Article 190(3)(b) of the Constitution does not permit the Speaker to inquire into the motive of the resignation. When a member is resigning on political pressure, he is still voluntarily doing so. Once the member tenders his resignation, it would be ‘voluntary’, and if the writing can be attributed to him, it would be ‘genuine’,” the bench said.

The court, however, made it clear that a legislator could not use resignation as a ploy to pre-empt disqualification as that would otherwise frustrate the very objective of the anti-defection law enacted under the Tenth Schedule.

“If we hold that the disqualification proceedings would become infructuous upon tendering resignation, any member who is on the verge of being disqualified would immediately resign…. Such an interpretation would, therefore, not only be against the intent behind the introduction of the Tenth Schedule, but also defeat the spirit of the 91st amendment,” Justice Ramana said.

“The taint of disqualification does not vaporise on resignation, provided the defection has happened prior to the date of resignation,” the court said.

“The pending or impending disqualification action in the present case would not have been impacted by the submission of the resignation letter, considering the fact |that the act of disqualification in this case have arisen prior to the members resigning from the Assembly,” it added.

The court asked Parliament to strengthen the anti-defection law to curb rising cases of horse-trading and corruption. “In order to uphold the Constitution, we need to have men and women who will make a good Constitution such as ours, better,” it said while stressing on the need for a Speaker to be neutral.