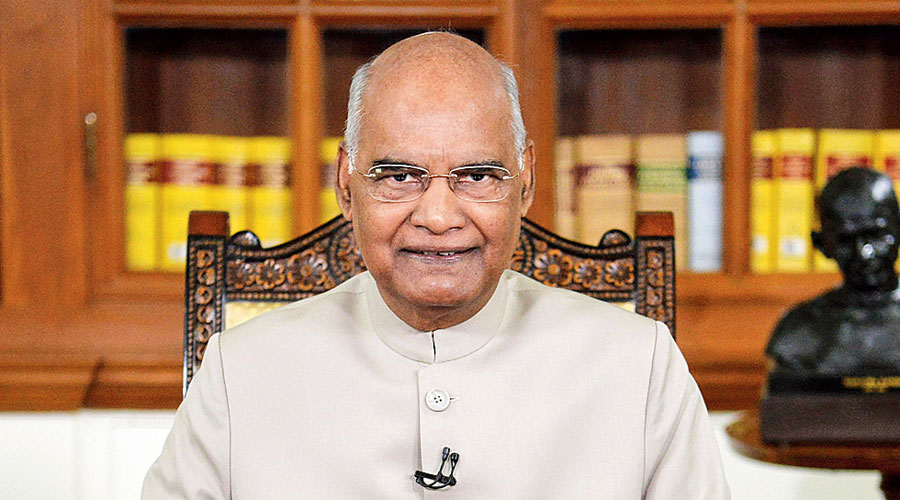 The letter urges President Ram Nath Kovind to ensure that the 'secular and apolitical character' of the army is preserved
File picture
Imran Ahmed Siddiqui   |   New Delhi   |   Published 15.10.20, 02:33 AM

As many as 120 military veterans have written to the President seeking “firm and immediate action” against those spreading false propaganda about a non-existent “Muslim Regiment” of the Indian Army that had refused to fight during the 1965 war with Pakistan.

The letter, which cites several instances of valour and selfless sacrifice by Muslim soldiers, has urged President Ram Nath Kovind to ensure that the “secular and apolitical character” of the army is preserved.  The President is the  supreme commander of the armed forces.

The veterans have said the genesis of the campaign of falsehood lies in a May 2013 tweet by the account holder @120croreHindus-World Hindus United that claimed that “in 1965 there was a regiment in Indian Army called Muslim Regiment which refused to fight against Pakistan after which it was dismantled”.

The letter points out that the tweet had been shared by hundreds since then and the false claim had again reared its head amid the border standoff with China.

“The tweet was meant to show that Muslim soldiers had their loyalties to Pakistan rather than India. The ‘Muslim Regiment’ post has been re-tweeted many times thereafter, and its insidious surfacing during the ongoing Chinese aggression is certainly suspect,” the veterans have said in the letter.

According to them, the post “questions the loyalty of all serving and retired Muslim soldiers”.

The veterans said in the letter: “Further, it helps the enemy by striking at the morale of India’s soldiers to degrade their operational capability.”

“These ‘Muslim Regiment’ posts are blatantly false, because the Indian Army did not have a Muslim Regiment in 1965 or since. Some senior-ranking veterans have unequivocally pointed out the false nature of these posts,” the letter says.

The veterans have said that “Muslims fighting as part of multi-class regiments proved their absolute commitment to the cause of our nation” and cited the example of Quartermaster Havildar Abdul Hamid, who had been posthumously awarded the Param Vir Chakra, India’s highest military award, for his courage in the Battle of Asal Uttar during the 1965 India-Pakistan war.

“Also in the 1965 war, Major (later Lt Gen) Mohammad Zaki and Major Abdul Rafey Khan were both awarded the Vir Chakra, the latter posthumously, when he fought against the Pakistani division commanded by his own uncle, Maj Gen Sahibzada Yaqub Khan. Such are the legends of Muslim warriors,” the letter points out.

Citing the instance of Brigadier Mohammad Usman who chose to remain in the Indian Army in spite of being approached personally by Muhammed Ali Jinnah to move to Pakistan, the letter says: “He fought the Pakistani invasion in Kashmir, was the senior-most officer killed in action in July 1948, and was posthumously awarded the Mahavir Chakra for his gallantry. He lies buried in the Jamia Millia Islamia campus in Delhi.”

The signatories have noted that such fake posts are an attack on India’s armed forces.

“Remaining apolitical and secular has been an article of faith for every soldier, sailor and airman, both at the institutional and individual levels. Every soldier swears to protect the Constitution of India…,” the letter says.

Appealing to the President to “ensure that the secular and apolitical character of our armed forces is preserved and to adhere unwaveringly to the vision and spirit of the Constitution of India, which spells out the framework for our nation and its people”, the signatories have sought the following actions:

⚫  Identify and charge such individuals for anti-national activities

⚫ Issue immediate instructions to all state governments to take immediate action against false and seditious messages on social media so that national security is not jeopardised.

Last week the fact-checking portal Alt News had published a report on how social media was brimming with claims that a “Muslim Regiment” of the Indian Army had refused to fight in India’s 1965 war with Pakistan.

Several users have referred to the posts to question the “loyalty” of Muslim candidates to be appointed as IAS and IPS officers. Recently, the Right-wing media outlet Sudarshan News had started a television series on a “conspiracy” by “Jihadi elements” to “infiltrate the government service”, before the Supreme Court halted the series.