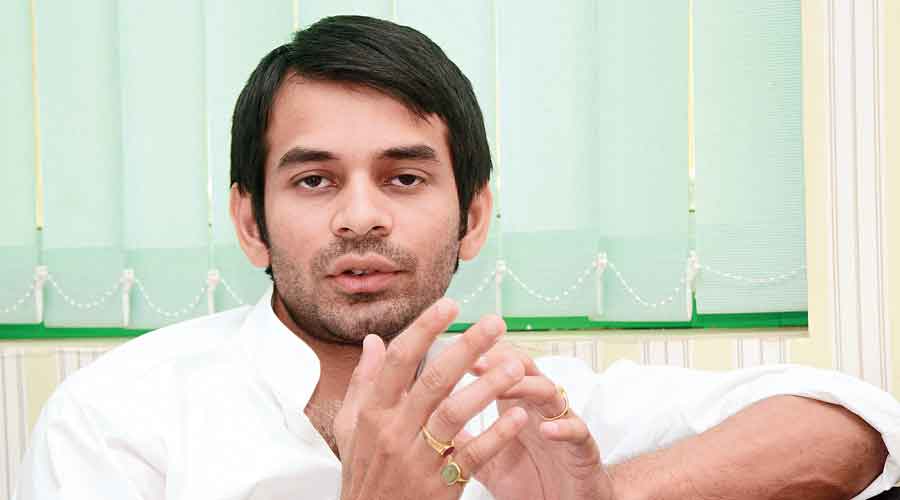 The latest development has the potential of creating a rift in the largest party in the Bihar Assembly at a time when senior leaders are expecting new political equations to emerge in the state, which may give the RJD a fresh shot at power.

Former Lok Sabha member and minister Jagadanand, 76, considered a loyal associate of Lalu, had been sulking for the past couple of months over the insults meted out to him by Tej Pratap, sources said. Jagadanand had stopped coming to the state party headquarters and had even tendered his resignation last month, but Lalu refused to accept it.

Senior party leaders said that the immediate trigger for the rift spilling out in the open was Jagadanand removing Akash Yadav from the post of the president of the student wing of the RJD, and installing one Gagan Kumar in his place on Wednesday. Akash is said to be close to Tej Pratap.

Stung by the move, Tej Pratap, who has always claimed to be a patron of the student wing (Chhatra RJD), chose to hit out at his brother Tejashwi Prasad Yadav’s aide Sanjay Yadav without taking his name. Sanjay hails from Haryana.

“The president (Jagadanand), while consulting the migrant consultant (read Sanjay), forgot that a party is run as per its constitution. The RJD’s constitution says that no office-bearer of the party could be relieved from his post without being served a notice. What happened is against the constitution of our party,” Tej Pratap said.

He also asserted that those who worked hard in the party were not being rewarded while those who indulged in sycophancy were being handed plum posts.

Several hours later, Tej Pratap attacked Sanjay again and said a “migrant consultant who cannot get any member of his family elected as sarpanch in Haryana cannot make my Arjun (read Tejashwi) a chief minister. He can only engineer friction in the Lalu family and the RJD”.

The Mahua MLA also alleged that Jagadanand refused to accept the fact that he was the elder son of Lalu. However, his remarks pointed at Sanjay were seen as an indirect attack on Tejashwi and queered the pitch further.

Jagadanand, who normally avoids getting into verbal duels or commenting on Tej Pratap’s barbs, chose to hit back this time. “I am not accountable to Tej Pratap. Who is he? I am accountable to Lalu Prasad,” an angry Jagadanand said on Thursday.

The latest development seems to be an outcome of the silent power struggle among Lalu’s children, in which his younger son and leader of the Opposition Tejashwi has risen to prominence.

Tejashwi led the party in the 2020 Assembly elections as the chief ministerial candidate of the Opposition Grand Alliance, winning 75 seats — more than the BJP (74) and the JDU (43) which are in power. He failed to come to power by just 12 seats.

On the other hand, Tej Pratap and Lalu’s eldest daughter, Rajya Sabha member Misa Bharti, lost out in the race within the party. They have stayed sidelined for the past four years.

Asked about the friction in the party, Tejashwi said: “Everybody has his own opinion. I am there, our national president (Lalu) is there. We will make everything all right. We are not worried.”

The ruling JDU and BJP took the opportunity to attack the RJD over the friction among senior leaders and Lalu’s sons. Leaders from both the parties claimed that Tej Pratap was not getting his due as the elder son of Lalu.

Reacting to their statements, Tejashwi asked them to “focus on the ongoing floods in the state in which lakhs of people were suffering immensely”.