The ruling party named incumbent Edappadi K. Palaniswami as its chief minister candidate for the May 2021 Assembly 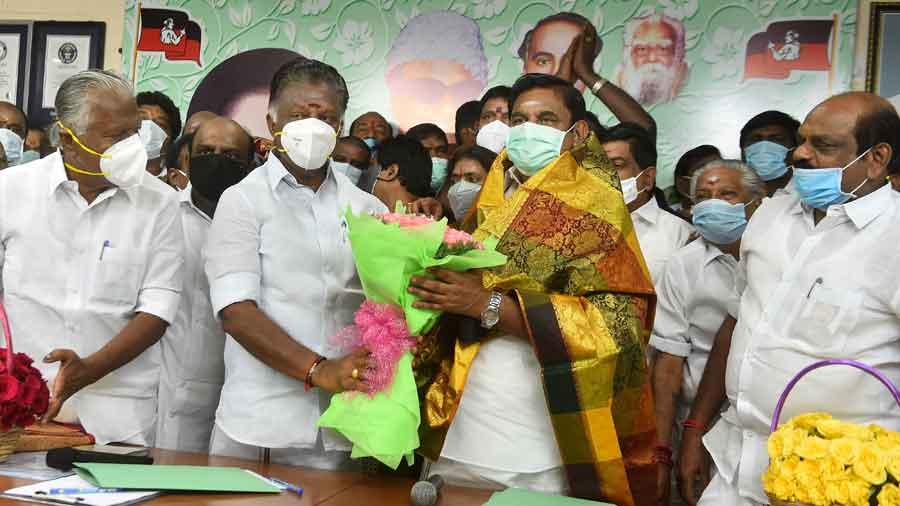 The ruling AIADMK in Tamil Nadu on Wednesday named incumbent Edappadi K. Palaniswami as its chief minister candidate for the May 2021 Assembly elections in a BJP-backed dual-leadership, power-sharing deal that ended a months-long cold war with deputy chief minister O. Panneerselvam.

Amid speculation that Panneerselvam, a three-time chief minister hailing from the powerful OBC Thevar community, could rock the boat and reclaim the party’s leadership, a AIADMK meeting in Chennai on Wednesday averted a split by recognising Palaniswami’s “very hard work”.

But this was not before Palaniswami, in a climb-down, agreed to constitute an 11-member steering committee of AIADMK seniors who would guide party affairs in the run-up to the polls. As part of the agreement, Panneerselvam will remain the party coordinator and treasurer, in effect the de facto AIADMK boss. Palaniswami will continue to be the AIADMK co-coordinator.

The BJP, with which the AIADMK has an alliance at the Centre, had played a proactive role in 2017 in envisioning the dual-leadership formula after Panneerselvam fell out with Sasikala, a close confidante of former chief minister Jayalalithaa, over power sharing in the aftermath of Jayalalithaa’s death.

Palaniswami took charge as chief minister on February 16, 2017, while Panneerselvam assumed a dominant role in the party along with being deputy chief minister.

The same arrangement of Palaniswami heading the government and Panneerselvam helming the party will continue with minor modifications.

However, Wednesday’s deal puts the seal on Palaniswami, an affable leader who has gained more popularity, to lead the government if the AIADMK returns to power.

Sasikala, serving time in a Bangalore prison in a disproportionate assets case, had plunged the party into turmoil in mid-February 2017. Her nephew and MLA, T.T.V. Dhinakaran, later floated a new outfit called the AMMK in a bid to “recapture” the AIADMK and counter efforts to build a new unit sans Sasikala.

In the packed hall, Panneerselvam then declared that keeping the interests of the party cadres and the people in focus, the AIADMK had unanimously decided that Palaniswami would be the chief ministerial candidate. “I am happy to have made this announcement and the Opposition’s dreams will not come true,” Panneerselvam told reporters later.

Even as celebrations broke out in different parts of the state with the two leaders burying the hatchet, a source said the BJP high command had advised the two factions to close ranks and settle the issues amicably.

Palaniswami’s insistence within the party that even Prime Minister Narendra Modi had “appreciated my performance”, including his handling of the Covid-19 crisis and attracting sizable foreign direct investment amid the economic gloom, is said to have found resonance. Simultaneously, Panneerselvam’s concerns over being sidelined have been addressed as of now. Both leaders, along with AIADMK functionaries, later paid homage at the memorials of MGR and Jayalalithaa on the Marina sands.

Camping at his home turf of Theni in the past few days, Panneerselvam had hinted at “consolidating” the AIADMK’s Thevar support base, sparking speculation of another split in the party. He had also inspected land for installing a statue of the late Mookiah Thevar, a protege of U. Muthuramalinga Thevar, once a key national-level leader of the Forward Bloc who had been close to Netaji Subhas Chandra Bose.

The Thevars, who have a martial background, were once the backbone of the Bloc in Tamil Nadu, but after the demise of Muthuramalinga Thevar and later Mookiah Thevar, factionalism weakened the party. Later, the DMK and the AIADMK took away a major chunk of the Thevar-Maravar vote-bank of the Bloc. That consolidation had been near-total under the leadership of M.G. Ramachandran, the AIADMK founder.

Panneerselvam’s strong signal to revive that spirit had been taken as a hint of engineering a split in the party; but ground realities constrained him, more so because his son O.P. Raveendranath is the only AIADMK MP in the Lok Sabha. Modi had campaigned for Raveendranath in Theni.

“It is now easier for us to take on EPS (Palaniswami) in the polls because he has been anti-Tamil, giving up the state’s rights over issues like GST dues,” DMK MP T.K.S. Elangovan told The Telegraph, adding that the truce might not hold.