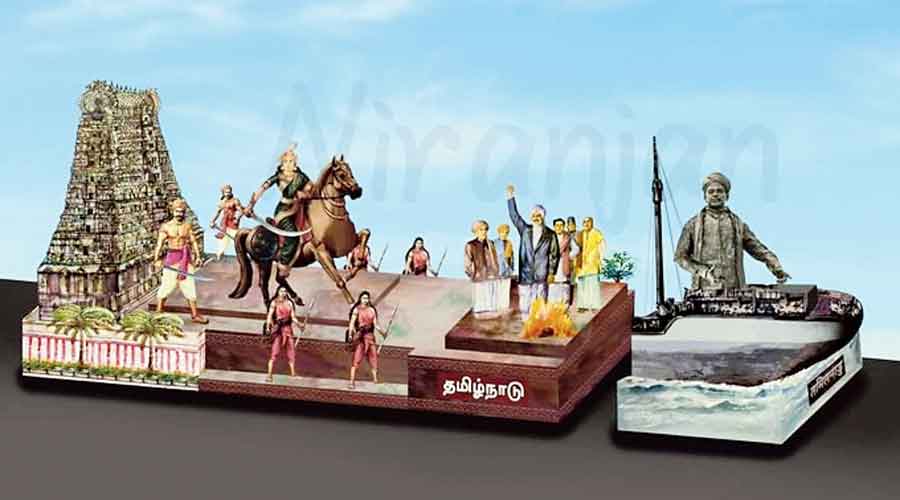 Tamil Nadu’s tableau that has been refused Republic Day display in Delhi will feature at the January 26 parade on Chennai’s Marina seafront with some alterations before being taken to all major cities of the state, chief minister M.K. Stalin has announced.

Later, a photo exhibition on “Tamil Nadu in Freedom Struggle” will be held in the country’s prominent cities, the DMK leader has declared, seeking to respond to the Centre’s snub by invoking Tamilian pride.

In the same vein, Stalin’s government has announced an intensification of a series of archaeological excavations, including one in Sivaganga district that is expected to push back Tamil Nadu’s golden period or Sangam Age by centuries.

These might unearth evidence to establish the need to “begin writing the history of the Indian subcontinent from Tamil Nadu”, Stalin said.

Tamil Nadu’s proposed float for the Republic Day parade in Delhi attempted to celebrate several of the state’s freedom fighters. It was rejected along with those proposed by fellow Opposition-ruled states Bengal and Kerala.

The Centre has denied any politics and cited time constraints to argue that not every tableau could be accommodated. After Stalin wrote to Prime Minister Narendra Modi seeking his intervention, defence minister Rajnath Singh wrote to the chief minister saying an expert committee and not the government had selected or rejected the proposed floats.

However, an unhappy Stalin issued a statement on January 18 underlining that Rajnath’s letter did not mention the reasons for the tableau’s rejection.

The tableau’s rear was to be brought up by a statue showing Rani Velu Nachiyar, queen of the Sivaganga region from 1780 to 1790, riding a horse and carrying a sword. The state wanted to showcase her as the first Indian queen to fight the British, decades before the Rani of Jhansi.

The original tableau also depicted the public hanging by the British of the two Maruthu Pandiyar brothers who had stood by the Rani, but the hanging scene was replaced with ordinary statues of the brothers after the expert panel objected, officials here said.

The tableau further commemorated nationalist Tamil poet Subrahmanya Bharathi and V.O. Chidambaranar, who had challenged the British monopoly on shipping by founding the Swadeshi Steam Navigation Company in 1906 in Tuticorin, for which he was jailed on sedition charges. Chidambaranar’s 150th birth anniversary is being celebrated this year.

Stalin said the exclusion of the freedom fighters had “deeply hurt the sentiments and patriotic feelings of the people of Tamil Nadu”.

“We did the modifications they suggested to the tableau, but we were not invited to the fourth round of meeting with the expert committee. Nor were any reasons cited,” Stalin said.

Ironically, Modi had on January 3 tweeted: “Remembering the brave Rani Velu Nachiyar on her birth anniversary. Her indomitable courage shall keep motivating the coming generations. Her strong commitment to fight colonialism was remarkable. She personifies the spirit of our Nari Shakti.”

Officials in Chennai said that apart from objecting to the hanging scene as “very harsh”, the expert panel wanted the colour of the Rani’s horse changed from white to brown. They also wanted the full-size statue of Chidambaranar reduced to a bust.

These were cited as “aesthetic” reasons. The state obliged but its float was still rejected, the officials added.

The excavations that will be speeded up include the eighth-phase digging at Keeladi, 12km from Madurai, in Sivaganga district. A sum of Rs 5 crore has been allotted for the excavations, to be carried out from February till September.

Stalin said the state archaeology department’s excavations in recent years (since 2017-18) at Keeladi and other clusters had marked a “turning point in the cultural historiography of the Sangam Age (the classical age of Tamil literature)”.

Historians and archaeologists generally ascribe the Sangam Age to the period from 200 BC to AD 200. However, carbon dating of artefacts unearthed at Keeladi and nearby clusters has now placed them as far back as 580 BC.

The artefacts are said to have “reaffirmed the antiquity” of Tamilians and the Tamil language and indicated that an advanced urban civilisation existed along the Vaigai river basin in southern Tamil Nadu.

Stalin said the excavations would be intensified to help arrive at more definitive conclusions about the “ancientness” of the Tamil language and culture.

The excavations will also look for the remains of the ancient Korkai harbour in coordination with the National Institute of Oceanography.