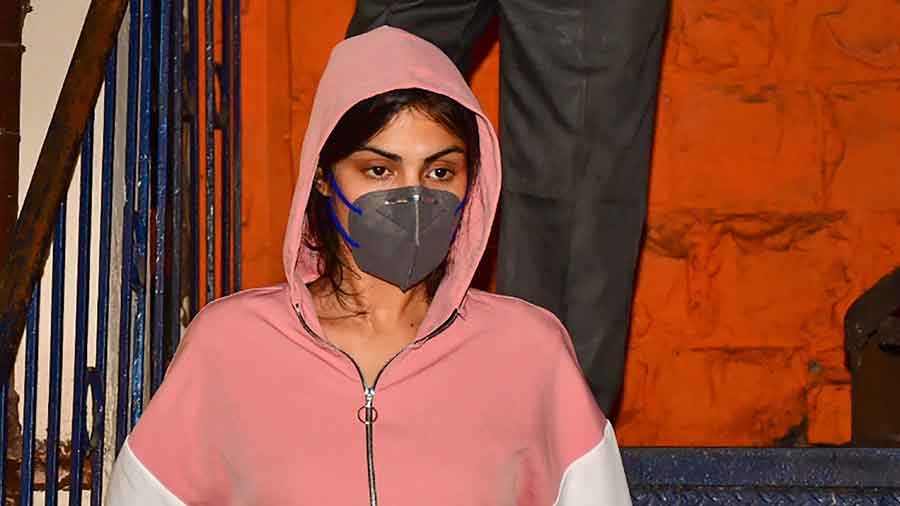 Actress Rhea Chakraborty on Wednesday walked free after spending nearly a month in Mumbai’s Byculla jail, with Bombay High Court rejecting the contention of the Narcotics Control Bureau (NCB) that she had financed her late boyfriend and actor Sushant Singh Rajput’s drug addiction.

The court said Rhea “is not part of the chain of drug dealers”.

A section of TV channels had picked on Rhea and run the most vicious slander campaign against any private individual in the propaganda history of the country in what was seen as an establishment-blessed diversionary tactic amid multiples crises in the country and ahead of the Bihar elections.

After the bail order, actor-director Farhan Akhtar tweeted: “Any shrill anchors apologising for the hell they put Rhea Chakraborty and her family through? Didn’t think so. But watch them shift the goalpost now.”

By nightfall, at least one channel had zeroed in on the “Hathras conspiracy”.

The NCB is a central agency that reports to the Union home ministry.

While granting Rhea bail with strict conditions, the court also dismissed the NCB’s argument that errant celebrities should be treated harshly to set an example before the young.

“Everybody is equal before law. No celebrity or role model enjoys any special privilege before the court of law. Similarly, such a person also does not incur any special liability when he faces law in the courts,” Justice Sarang Kotwal said.

The judge said: “Each case will have to be decided on its own merits irrespective of the status of the accused.”

The court rejected the bail plea of Rhea’s brother Showik Chakraborty, saying he “appears to be a part of the (drugs) chain” rather than being a consumer or an end-purchaser.

It, however, said Rhea “is not part of the chain of drug dealers” and “has not forwarded the drugs allegedly procured by her to somebody else to earn monetary or other benefits”.

The court imposed a bond of Rs 1 lakh on Rhea and asked her to mark her presence at the nearest police station daily for 10 days and before the NCB on the first day of every month for six months.

She must hand over her passport and cannot travel abroad without the court’s permission. To leave Mumbai she would need the NCB’s permission and must provide the agency with her travel itinerary.

Rhea’s counsel Satish Maneshinde said: “The arrest and custody of Rhea was totally unwarranted and beyond the reach of law. The hounding and witch-hunt by three central agencies — the CBI, ED and the NCB — should come to an end.”

The CBI is probing whether Sushant, found dead in his Mumbai apartment on June 14, committed suicide or was murdered; the NCB is investigating illegal supply of drugs to him by his associates; and the Enforcement Directorate is looking into allegations that Rhea siphoned money off Sushant’s bank accounts.

The NCB had arrested Rhea on September 8, accusing her of being “an active member of a drug syndicate”, financing Sushant’s drug habit and “harbouring” him, a drug offender.

The following are the reasons bail was granted and the response from legal experts:

⚫ The NCB failed to prove the seizure of any drugs from Rhea’s possession or from Sushant’s, former additional solicitor-general and senior criminal lawyer Siddharth Luthra told The Telegraph later.

⚫ Even if Rhea had, as alleged, spent money to procure drugs for Sushant, this did not mean that “she had financed illicit traffic”, the court said.

⚫ She was not “part of the chain of drug dealers” and “has not forwarded the drugs allegedly procured by her to somebody else to earn monetary or other benefits”, the court said.

⚫ Nor does the charge of “harbouring” drug offenders apply to Rhea since Sushant did not fear arrest, the court said.

⚫ The court was “satisfied that there are reasonable grounds for believing that the applicant (Rhea) is not guilty of” any offence “involving commercial quantity” of drugs.

“The material at the highest shows that she has committed an offence involving contraband, but the crucial element of incurring rigours of Section 37 (for grant of bail) in respect of commercial quantity is missing,” the court said.

⚫ “Since she has no criminal antecedents, there are reasonable grounds for believing that she is not likely to commit any offence while on bail,” the court said.

Later, eminent criminal lawyer and former additional solicitor-general K.V. Viswanathan told this newspaper: “The findings leave one to wonder where was the justification for arrest at all.”

Luthra said Section 27A of the Narcotic Drugs and Psychotropic Substances Act puts a “very heavy onus on the accused because it is for the accused to prove his or her innocence”, and that Rhea had succeeded in doing so before the court.