Justice Madan B. Lokur pointed at the deed while saying Father Swamy’s death was 'very unfortunate and tragic' 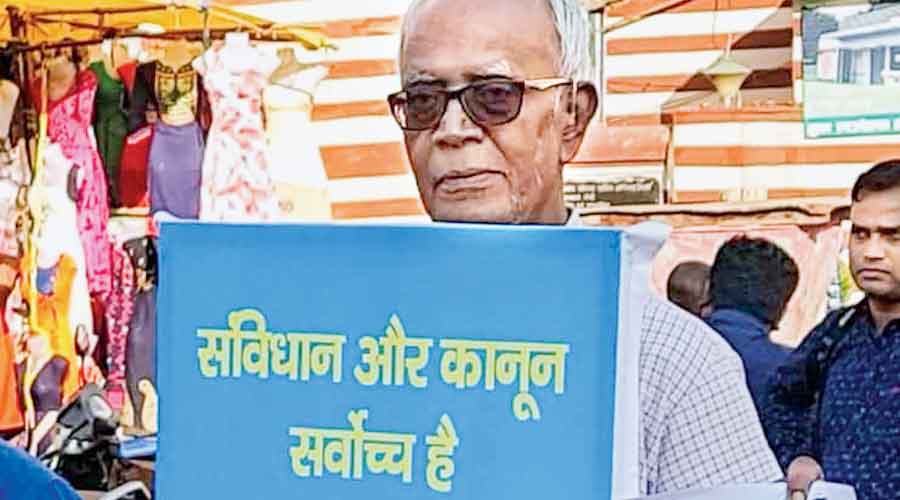 The Supreme Court’s 1977 dictum that bail is the “rule” and jail the “exception” is more often breached than honoured by the lower courts, legal experts said on the day 84-year-old Father Stan Swamy died in Mumbai waiting for bail.

Senior advocate Colin Gonzalves said Delhi High Court’s grant of bail to Natasha Narwal and Gauhati High Court’s relief to rights activist Akhil Gogoi were exceptions, the “general trend” being for courts to go by what the central government told them.

“Knowing Stan Swamy as a friend, knowing him as a peace-loving activist for decades, I feel very bitter that the courts treated him the way they did,” Gonzalves told this newspaper.

“Ultimately, a good man has died. A good person has died in jail because of somebody’s negligence. And I do hope that the person responsible for the negligence understands it. It is unforgivable.”

In State Of Rajasthan, Jaipur vs Balchand @ Baliay, the apex court had on September 20, 1977, laid down that bail should be the “rule” for the accused and that they should be remanded in jail only in exceptional circumstances. The judgment, authored by Justice V.R. Krishna Iyer, has been reiterated in many apex court orders.

Sections 436 to 439 of the CrPC deal with the grant of bail to accused as well as convicts who appeal before a higher court. As a norm, bail is easier to secure in less heinous cases and more difficult in cases related to offences like murder, attempt to murder, rape, terrorism or narcotics.

In the Balchand case, the apex court had held: “The basic rule is bail, not jail,

except where there are

circumstances suggestive of fleeing from justice or thwarting the course of justice or creating other troubles in the shape of repeating offences or intimidating witnesses and the like by the petitioner who seeks enlargement on bail from the court.

“When considering the question of bail, the gravity of the offence involved and the heinousness of the crime which are likely to induce the petitioner to avoid the course of justice must weigh with the court.”

Once it becomes obvious that a timely trial is not possible and the accused has suffered imprisonment for a significant length of time, courts would ordinarily be obliged to free them on bail, the top court had held.

On February 1 this year, the bench of Justices N.V. Ramana (presently Chief Justice of India), Surya Kant and Aniruddha Bose had ruled that an accused is entitled to bail even under stringent anti-terror and narcotic laws when there is little possibility of the trial being completed early.

The bench had granted bail to K.A. Najeeb, facing trial in Kerala under the Unlawful Activities (Prevention) Act for allegedly chopping off a professor’s hand.

The National Investigation Agency had approached the apex court for cancellation of Najeeb’s bail, granted by Kerala High Court.

“Even in the case of special legislations like the (now repealed) Terrorist and Disruptive Activities (Prevention) Act, 1987, or the Narcotic Drugs and Psychotropic

Substances Act, 1985, which too have somewhat rigorous conditions for grant of bail, this court... enlarged the accused on bail when they had been in jail for an extended period of time with little possibility of early completion of trial,” the apex court said.

“The constitutionality of harsh conditions for bail in such special enactments has thus been primarily justified on the touchstone of speedy trials to ensure the protection of innocent civilian.”

The apex court had agreed with the NIA that the charges against Najeeb were serious but noted that he had already spent five years in jail and there was no likelihood of the trial concluding anytime soon. The bench also noted that 276 witnesses were left to be examined.

Justice Lokur said the courts should consider bail a matter of right unless there are compelling reasons to deny the relief.

“All the three agencies — courts, investigating agencies and prosecution — must take a compassionate view while considering bail,” he said.

Justice Lokur said the existing CrPC provisions gave “enough room” to courts to grant bail and there was little need to tweak them to ensure more liberal grant of bail.

Under Article 141 of the Constitution, the law laid down by the Supreme Court is binding on all civil and judicial authorities of the country, including the high courts. Yet the courts have in recent times tended to put more faith in the contentions of the prosecuting and investigating agencies, Gonzalves told this newspaper.

He said people “must learn to stand up to the tyranny” of the central government.

The letter Stan wrote before being led away