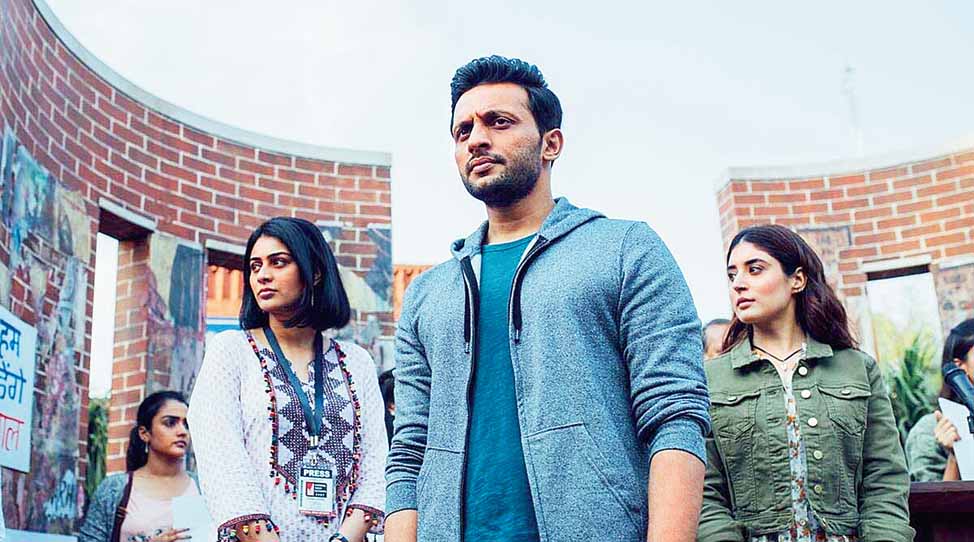 The court’s order means the series makers and actors can be arrested unless they get an anticipatory bail or the FIR are quashed
(twitter.com/PrimeVideoIN)
Our Legal Correspondent   |   New Delhi   |   Published 28.01.21, 02:52 AM

The Supreme Court on Wednesday refused to stay multiple FIRs registered across the country against streaming platform Amazon Prime and the makers of the web series Tandav but agreed to examine a plea for the clubbing of the cases for trial at one place.

The court’s order means the series makers and actors can be arrested unless they get an anticipatory bail or the FIRs are quashed.

Many have objected to what they have termed derogatory references to Lord Shiva in the series, with BJP members protesting in different parts of the country and also expressing anger at its depiction of a farmers’ protest and the machinations of a politician played by Saif Ali Khan.

A bench of Justices Ashok Bhushan, R. Subhash Reddy and M.R. Shah said the petitioners were free to approach the respective state high courts for quashing of the FIRs. A battery of senior lawyers, including Fali S. Nariman, Mukul Rohatgi and Sidharth Luthra, had pleaded for the scrapping of the FIRs.

The top court, however, issued notices to various states and complainants for their response on the possibility of clubbing the cases.

Although Nariman and the other counsel pleaded that “no coercive action” be taken against the petitioners, the bench declined to pass any direction. While Nariman and Rohatgi represented Aparna Purohit, the creative head of Amazon Prime, Luthra appeared for Tandav producer Himanshu Mehra and director Abbas Zafar.

Nariman had told the bench that the FIRs had no relevance since the makers of the series had already tendered apologies and had also withdrawn the scenes that had allegedly hurt the sentiments of Hindus.

“You want the FIRs to be quashed. But why can’t you approach the high courts?” Justice Bhushan, heading the bench, asked.

The senior counsel said they were registered in six states and it would be difficult for the petitioners to approach multiple high courts. “We have removed the objectionable content and still there are cases being filed,” Nariman said. But the court said the petitioners could not directly invoke the jurisdiction of the Supreme Court under Article 32 for alleged violation of their fundamental right to free speech.

Justice Shah said the police could also file closure reports if apology had been sought and the objectionable content removed.

Rohatgi referred to the recent case of Republic TV managing director Arnab Goswami when the apex court had agreed to examine his plea for clubbing multiple FIRs registered against him.

“In Arnab Goswami’s case it has been established that after a violation of Article 19(1)(a) we can move the Supreme Court. Parties (petitioners) are in Mumbai, how many states will they go to to defend themselves? Rohatgi said.

“People get offended with anything and everything these days. Please protect us with no coercive steps. We deleted content without any protest. Scenes have been deleted. It’s a political satire. (If) people are so sensitive in this country, then 19 (1)(a) would be destroyed. Arnab Goswami was also protected,” he argued.

Article 19(1)(a) deals with freedom of speech and expression.

“Your right to freedom of speech is not absolute. It is subject to restrictions,” Justice Shah told Luthra.

Luthra said the court had a duty to step in when there was an infraction of fundamental rights.

He referred to the T.T. Anthony case wherein the Supreme Court had abhorred the practice of multiple FIRs being registered over the same offence. “I (the petitioners) am being dragged all across the country and prosecuted. There are multiple FIRs against me,” he said.

Advocate Siddharth Aggarwal, appearing for Mohd Zeeshan Ayyub who plays the role of a reformist student leader, said: “I am an actor who was contracted to play a character. Views ascribed on screen cannot be prescribed to me in person.”

However, Justice Shah shot back: “You cannot take up a role without reading the script…. You cannot play a role hurting the religious sentiments of others.”

Rohatgi argued that at the end of the day, this was a single offence.

“If a murder is reported 100 times, then there cannot be 100 offences against me. It is a genuine innocent case. Everyday there is an FIR. Where will a man go? At least club them in one place. This is not a transfer plea. This case will put a lot of people under great harassment. Article 19(1)(a) was completely brushed away,” Rohatgi said.