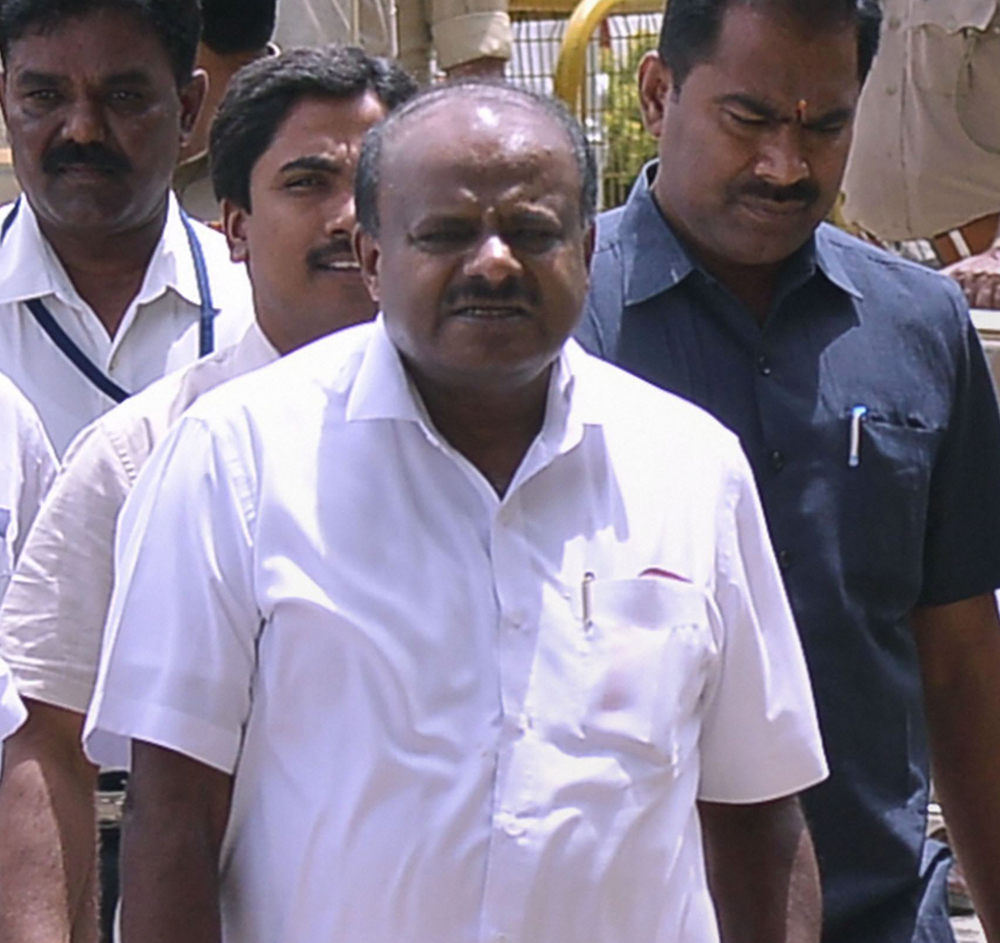 Within minutes of the court directions, chief minister H.D. Kumaraswamy asked Speaker Ramesh Kumar to fix a date for a trust vote, surprising and rattling the BJP which herded all its MLAs to a resort to shield them from possible poaching.
PTI
R. Balaji   |   Bangalore   |   Published 13.07.19, 01:53 AM

The Supreme Court on Friday restrained the Karnataka Speaker from deciding on the resignations and possible disqualification of 10 rebel ruling coalition MLAs, ordering “status quo” till further orders from a Constitution bench that would decide the larger issues involved.

The bench of Chief Justice Ranjan Gogoi and Justices Deepak Gupta and Aniruddha Bose said the Constitution bench would start hearings from Tuesday. The two principal issues before it will be:

Friday’s court order gives a breather to the Karnataka government, which could have fallen if the resignations were accepted. Within minutes of the court directions, chief minister H.D. Kumaraswamy asked Speaker Ramesh Kumar to fix a date for a trust vote, surprising and rattling the BJP which herded all its MLAs to a resort to shield them from possible poaching.

On a petition from 10 rebel Congress-JDS lawmakers, the Supreme Court had on Thursday directed Kumar to decide on their resignations “forthwith” and place his decision before it on Friday morning.

But Kumar on Friday sought more time arguing that parallel disqualification proceedings had been pending against some of the rebels since February and he needed to sort that out first before deciding on the resignations. His lawyer, senior advocate Abhishek Singhvi, said the resignations were an attempt to bypass possible disqualification.

Kumar had made the same point on Thursday, while questioning the court’s powers to issue directives to a Speaker on the discharge of his or her Constitutional duties.

While the rebel MLAs have resigned rather than try to defect to the other side, disqualification — as opposed to acceptance of their resignation — can still cause them some discomfort.

Bangalore-based legal expert Ashok Haranahalli explained that disqualified lawmakers cannot become ministers till they contest and win a by-election — or a subsequent election. No disqualified Congress or JDS legislator can, therefore, immediately join a new BJP government in Karnataka if one is formed.

Former attorney-general Mukul Rohatgi, appearing for the rebels, alleged that Kumar wanted to disqualify them first to make their resignations infructuous.

He said the Speaker could be given “one or two days” to decide but should face contempt proceedings if he disqualified the MLAs.

Disqualification proceedings had begun against four Congress MLAs in February after they defied a whip, but were kept pending because they later obeyed another whip. One of the four has since then left the party while two are among the current batch of rebels.

“The Speaker is riding two horses. He says the Supreme Court is ‘nobody to give me directions’. He also says he has to study the resignations….” Rohatgi said.

Singhvi said he was not. Justice Gogoi persisted: “Is it the stand of the Speaker that the Supreme Court should stay off its hands from the issue?”

Singhvi said the Speaker was a senior legislator who knew constitutional law and was bound to act according to the rules of the legislature. “His arguments are more nuanced. All that the Speaker is saying is that under Article 190 he is entitled to check if the resignations are voluntary, genuine and bona fide. An inquiry has to be undertaken.”

Another senior advocate, Rajeev Dhavan, appearing for Kumaraswamy, questioned the maintainability of the rebels’ petitions, filed under Article 32 which deals with the enforcement of citizens’ fundamental rights.

The apex court later passed the status quo order and referred the larger issue to the Constitution bench.