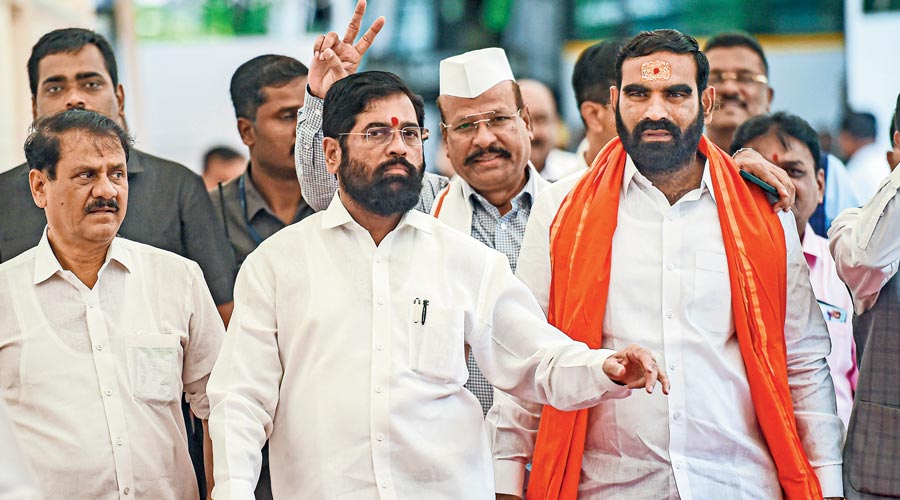 Maharashtra chief minister Eknath Shinde on Monday comfortably won a confidence vote in the state Assembly, cementing his grip on power five days after assuming office with BJP support after revolting against the Shiv Sena leadership.

In his maiden speech in the Assembly after winning the trust vote, Shinde, without naming the Shiv Sena, said he had been “suppressed” for a long time and spoke about how he almost became chief minister of the erstwhile Sena-NCP-Congress alliance government. He said the rebellion led by him last month was a fallout of the “unfair treatment” meted out to him.

In the 288-member Assembly (effective strength 287), 164 MLAs voted for the motion of confidence moved by the Shinde-led government, way above the simple majority mark of 144, while 99 voted against it on the last day of the two-day special session of the House.

Three MLAs abstained, while 20 legislators, most of them from the Congress and the NCP, including Congress’s Ashok Chavan and Vijay Wadettiwar, both former ministers, were absent during the trust vote.

Speaker Rahul Narvekar, who presided over the proceedings, did not cast his vote.

Narvekar announced that the trust vote was carried by a majority vote. This was the second victory for the Eknath Shinde-Devendra Fadnavis government in as many days after its candidate for the Assembly Speaker’s post, Narvekar, was elected on Sunday. PTI

Narvekar, the BJP MLA from Colaba in South Mumbai, had polled 164 votes, while his rival Rajan Salvi, of the Uddhav Thackeray-led Shiv Sena, got 107.

Last month, Shinde, 58, launched a rebellion against the Shiv Sena leadership and managed to get the support of nearly 40 MLAs of the party, leading to the collapse of the two-and-a-half-year old Maha Vikas Aghadi (MVA) government led by chief minister Uddhav Thackeray.

Speaking after winning the trust vote, Shinde said: “The happenings of today (events leading to trust vote) didn’t happen in just one day…  I have been suppressed for a long time.”