These labourers have been working under the scheme between April and September this year but the Centre sent wages in September, and not within 15 days 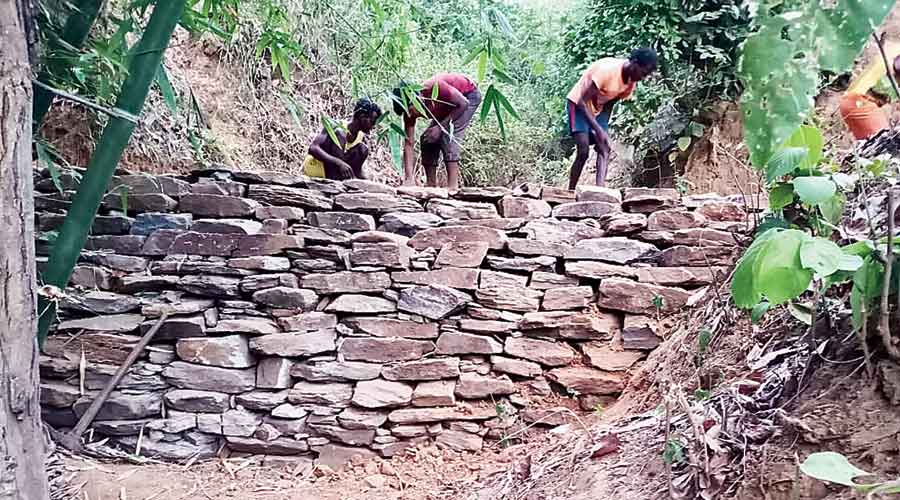 Ashok Munduri from Chhotalagia village in Jharkhand borrowed Rs 5,000 in July to rent a tractor to plough his land. He had to sell a pig to repay the amount a month later, for he hadn’t received his rural job scheme wages.

A study’s findings, released on Friday, said 71 per cent of those who had worked under the scheme between April and September this year did not receive their wages on time.

“I had worked 23 days on a land development project in my village under the Mahatma Gandhi National Rural Employment Guarantee Act (MGNREGA) in June and July,” the paddy grower from West Singhbhum district said.

“I borrowed the sum in the last week of July, hoping to repay it in a week after I got my wages. But I didn’t receive my wages even by the end of August. So I had to sell my pig.”

The Union rural development ministry sent the wages to his account in September.

The scheme requires the wages to be paid within 15 days of the end of each phase of a project. State officials are mandated to send to the Union ministry funds transfer orders (FTOs) within eight days, seeking payment for the workers. The ministry is supposed to pay the wages in another seven days.

Munduri said the job plan, which entitles every rural household to up to 100 days’ paid and unskilled work a year, was a “good” scheme. “But delays in wage payment are a big problem,” he added.

LibTech India, a team of independent researchers, studied the FTOs issued for 18 lakh rural job scheme workers, having randomly selected 10 per cent of the FTOs raised per block from 10 states including Bengal. The data are available on the scheme website.

It found that while the state officials had largely met their eight-day deadline, the Union ministry had mostly exceeded its mandated seven-day period.

While 71 per cent of the transactions had exceeded the seven-day deadline, 44 per cent had exceeded 15 days — that is, witnessed a delay of eight days or more.

“It’s the central government that is responsible for the delay in wage payment as the states sent their FTOs on time,” said Rajendran Narayanan, academic and lead researcher who presented the findings at an online news conference.

The study found that the rural development ministry had delayed by at least eight days the payments to nearly two-thirds of Jharkhand’s workers, and to half or more among the workers from Madhya Pradesh, Chhattisgarh and Bengal. About 45 per cent wage payments to Bengal’s workers were pending on October 13.

On March 2 this year, the rural development ministry had issued a circular dividing the workers into three caste-based categories — Scheduled Castes, Scheduled Tribes and Others — and stipulating separate payment for each group. It cited accountancy needs as the reason without elaboration.

But this added to the state officials’ burden in processing the data and segregating the FTOs.

“The caste-based segregation of FTOs led to no benefits. On the contrary, it has caused a threefold increase of work for block officials, and created caste-based and religious frictions among communities,” Rajendran said.

Social activist Nikhil Dey, who is associated with the Mazdoor Kisan Shakti Sangathan that works for implementation of the rural job scheme in Rajasthan, said the Union ministry deliberately delayed wage payment to discourage the panchayats from taking up too many projects.

This was because the scheme had almost exhausted its funds already, he said.

“Already, 90 per cent of the budget for the scheme has been exhausted, but the finance ministry is yet to release additional funds,” Dey said.

An email sent to rural development secretary Nagendra Nath Sinha seeking the reasons for the wage delays has brought no answers.

A shift in focus in NREGA