Student groups and Left parties protest against ‘murder’ in Assam

The NSUI burnt an effigy of Himanta Biswa Sarma, and the Left-led students’ union at JNU too held protests 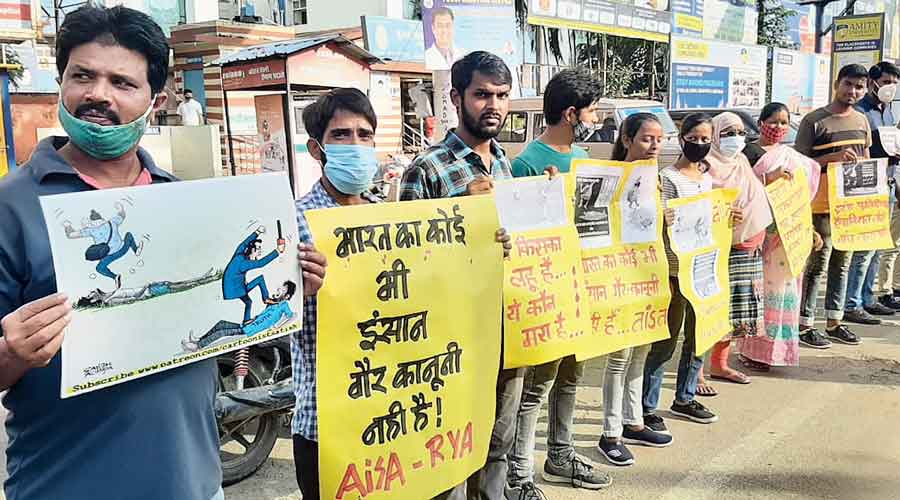 Student groups and Left parties have been protesting across India against “state-sponsored murder” in Assam’s Darrang district, where a child and a man died in police firing during an eviction drive on Thursday.

In Delhi, police detained students on Friday when they attempted to protest in front of Assam Bhavan. Congress student arm NSUI burnt an effigy of Assam chief minister Himanta Biswa Sarma, and the Left-led students’ union at JNU too held protests.

On Saturday, activists from across the Opposition spectrum demonstrated on Jantar Mantar Road near the central secretariat.

“When the NRC (update) started in Assam and (Union home minister) Amit Shah was explaining the ‘chronology’ (of passing the Citizenship Amendment Act after the National Register of Citizens update to naturalise non-Muslim refugees), the future was hidden. It is being seen now.”

Bhattacharya demanded the resignation of Himanta and the removal of the superintendent of police, Sushanta Sarma.

“No human being living in our country can be called ‘illegal’; no one has the right to justify this barbarism. Not just the murder or the firing for displacement — the photographer’s celebration and dance are fascism’s dance....”

A photographer, hired by the district administration to document the eviction at the minority-dominated settlement, was seen stamping on a motionless Moinul Hoque, one of the victims of the police firing.

Bhattacharya said all this was the result of the spread of hatred by the BJP-RSS. “It needs to be stopped…. This was a state-sponsored murder of the most helpless.”

The Fraternity Movement, backed by the Jamaat-e-Islami-i-Hind, too participated in Saturday’s protests after its cadres had courted detention opposite Assam Bhavan on Friday.

Afreen Fatima, its national secretary and a student councillor at JNU, told The Telegraph: “The enactment of the NRC turned ethno-nationalism into ethno-fascism, and Bengali Muslims are facing the brunt of it. To call them illegal immigrants is a ploy to divert attention from the illegal land grab by the Assam government.”

She demanded an “impartial probe” and the immediate suspension of the SP.

“We’re here to tell the Muslims of Assam, they’re not alone. They are Indians and will stay in India.”

The Assam government has ordered a judicial probe and asked for the CBI to take over the police investigation.

Protests were held in Darbhanga (Bihar), Aligarh, Nagpur and several places in Kerala as well.

A team from the CPM-backed All India Kisan Sabha will visit the flashpoint in Assam next month.

The group said in a statement: “The eviction drive took place even as a case was pending with the Gauhati High Court on the matter, without even giving enough notice to the people…. AIKS demands dismissal of the authorities responsible for the killing and resignation of the Assam chief minister Himanta Biswa Sarma....”

It added: “The entire eviction drive in the name of ‘illegal migrants’ is with an ulterior motive of communally polarising the state.... If the government was actually promoting a policy of community farming, it could have involved these 800 households who were cultivating the area for decades.

“After the Haryana BJP government brutally killed a farmer, Sushil Kajal, now the Assam BJP government has also followed suit by shooting down two farmers with a sinister agenda of pitting communities against one another.”

Kajal died of a heart attack after allegedly being injured in a lathi-charge on protesting farmers in Karnal, Haryana, last month. A video shows an administrative officer purportedly asking the police to break the protestors’ heads.

In Ranchi, about 50 people representing Left parties such as the CPIML and the SUCI, and other organisations like the All India People’s Forum and Awami Insaf Manch, protested against the Assam firing. The Jharkhand Youth Federation, Awami Group and the Ranchi Youth Association too participated in the demonstration.

“The Assam government was pretending to be helping the Adivasis by floating an agricultural project... but had earlier evicted the same Adivasi people elsewhere in the state.” Nadim Khan of the AIPF alleged. “The government move left 800 poor Muslim families homeless too.”