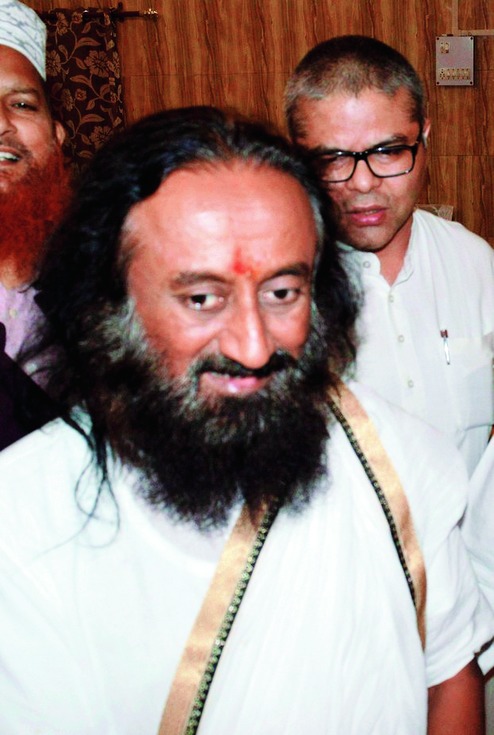 However, another senior trust functionary and VHP leader, Ram Vilas Vedanti, opposed the spiritual speaker's intervention and questioned his intentions. Also, two Muslim plaintiffs whom Ravi Shankar met later in the day told this newspaper they rejected any out-of-court settlement.

Even Uttar Pradesh chief minister Yogi Adityanath, whom Ravi Shankar had met on Wednesday, told reporters on Thursday morning that he had no hopes from the mediation efforts.

During Wednesday's meeting with Adityanath, Ravi Shankar had apparently boasted about having created an atmosphere in which even some Muslim leaders were advocating a Ram temple in Ayodhya.

"Such talks have failed in the past," the chief minister told reporters on Thursday when asked about Ravi Shankar's efforts. "It is too late for mediation on the Ram temple issue as the Supreme Court is going to hear the case from December 5."

Narendra Giri, president of the All India Akhara Parishad, who met Adityanath on Thursday morning, said: "Sri Sri is enacting a drama; he can keep doing it but it won't make any difference."

Ravi Shankar, speaking in the presence of Das, had said: "It's a religious issue and can be solved with the cooperation of religious people."

But Vedanti, a former BJP parliamentarian, accused Ravi Shankar of "trying to appease the government to protect his black money".

"I have come to know that he recently received a huge foreign donation," Vedanti alleged. "He is trying to get involved in the Ram temple dispute to somehow appease the central government and evade paying tax against this income."

"Ravi Shankar wants the Muslim side to agree to the VHP demand (a temple in Ayodhya but no new mosque anywhere in Faizabad district). I met him because we welcome whoever comes to our home," Iqbal said. "I told him we'd wait for the Supreme Court judgment."

Mahant Gyan Das, former president of the Akhara Parishad and head of the Hanumangarhi temple in Ayodhya, too questioned Ravi Shankar's intentions.

"In 2015, I had almost reached an agreement with Hashim Ansari, the oldest plaintiff in the case (for a temple and a mosque side by side on the disputed plot), but Ravi Shankar sent an invite to me through Ashok Singhal, then head of the VHP," Gyan Das said.

"During our meeting in Bangalore, Ravi Shankar asked me to discontinue the talks because he was supporting the VHP demand. What has happened now that Ravi Shankar wants to start talks afresh?"

Singhal and Hashim died in November 2015 and July 2016, respectively. Hashim's son Iqbal is pursuing the case.