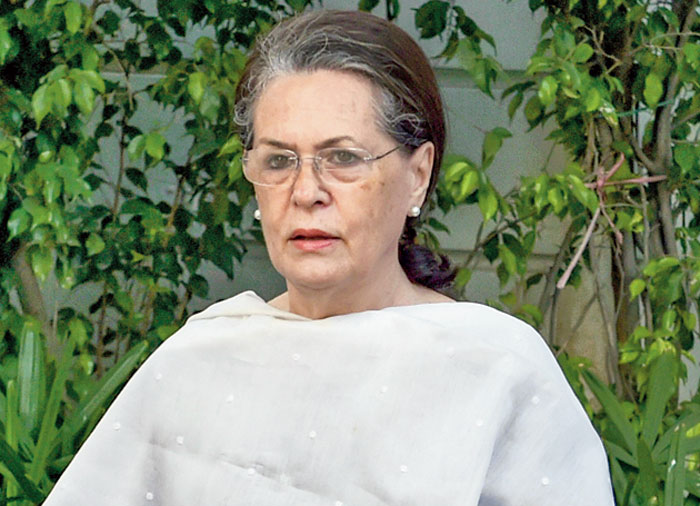 Congress president Sonia Gandhi has said that ordinary people are paying a heavy price for Prime Minister Narendra Modi’s “cavalier attitude” towards the economic slowdown, and that the weakening of institutions and the alleged snooping on citizens were dangerous and shameful.

“As a citizen and member of a responsible Opposition, it pains me to see the Indian economy under siege. What is even more worrying is that the government is in complete denial,” she told party office-bearers at a meeting that reviewed the preparations for the nationwide agitation between November 5 and 15.

The primary reason for the agitation is the government’s move to join the Regional Comprehensive Economic Partnership (RCEP), a regional free trade agreement among 16 Asian countries that the Congress believes would hurt farmers and shopkeepers.

Sonia said: “Instead of acknowledging the severe slowdown and looking for a comprehensive resolution, Prime Minister Modi is too busy managing headlines and events.”

She added: “This cavalier attitude comes at a high price, a price that millions of our fellow Indians, especially the unemployed youth and farmers, are having to endure.”

Sonia said all the economic indicators were pointing towards a prolonged slowdown. “The consistent weakening of institutions, withholding of data and tampering with statistics have all resulted in the erosion of India’s economic credibility. It is unfortunate that economic experts who point this out are ridiculed and labelled anti-nationals,” she said.

“Independent thinking and even constructive criticism are arrogantly brushed aside. No sector of the economy has been left untouched by the slowdown: automobiles, banks, manufacturing, agriculture….

“As if the government’s economic decisions have not damaged the economy enough, it is now ready to deal a body blow to it by signing the RCEP. This will result in untold hardship for our farmers, shopkeepers, and small and medium enterprises, with serious repercussions for the people.

“We can ill afford to become a dumping ground for products, including agricultural produce, from foreign countries.”

The Congress is expected to attack the government over the RCEP during Parliament’s winter session, which starts on November 18. The Congress plans to call a meeting of all Opposition parties to discuss the issue.

The Youth Congress held a demonstration on Saturday against the inclusion of milk products in the RCEP.

Sonia argued that the fall in GDP growth signalled a deep crisis. “This is a sign of weak demand, low consumption, no investment and, as a result, no jobs. Unemployment levels at nearly 8.5 per cent are most disturbing,” she said.

“Far from creating jobs, recent studies now suggest that the demonetisation, a messed-up GST and the subsequent economic decisions of the Modi government have resulted in an unprecedented loss of nine million jobs during the last six years.”

Sonia said the BJP had promised to double farmers’ income but, instead, left them battling deceleration in growth.

“India’s economic woes are not confined to the domestic front. Inconsistent and defective policies have seen exports shrink at a time when India could have been a big beneficiary of the global trade wars,” she said.

She also mentioned the snooping controversy. “There are so many other issues of which you will be aware. The latest shocking revelation is that through the Israeli Pegasus software acquired by the Modi government, snooping and spying on activists, journalists and political persons have taken place,” she said.

“These activities are not only illegal and unconstitutional, they are shameful.”