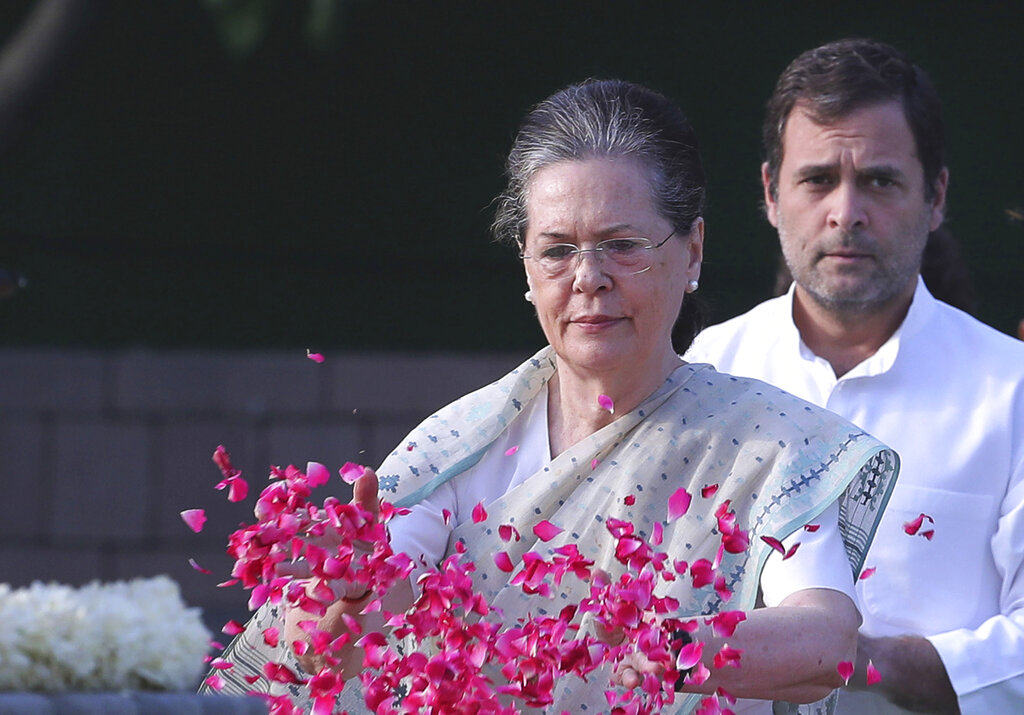 Sonia Gandhi, 72, has been made interim president barely 20 months after she voluntarily relinquished the top post in favour of son Rahul Gandhi who refused to continue on as Congress chief after a humiliating 2019 general election defeat.
AP
PTI   |   New Delhi   |   Published 11.08.19, 12:19 PM

Having earned the distinction of being the longest serving Congress president, Sonia Gandhi is once again at the helm to steer her party out of troubled waters.

Sonia Gandhi, 72, has been made interim president barely 20 months after she voluntarily relinquished the top post in favour of son Rahul Gandhi who refused to continue on as Congress chief after a humiliating 2019 general election defeat.

For the Congress Working Committee (CWC) the natural choice was Sonia Gandhi, who has been the party's saviour-in-chief in times of crisis and a binding force.

Critics say the development has once again highlighted how the Congress is unable to look beyond the Gandhi family when it comes to leadership. With no time line set for party elections, Sonia is likely to continue in the top post in coming months.

In her 19-year stint as Congress chief, Sonia Gandhi was hailed for deft handling of party intrigues and judgment that gave the party two consecutive wins at the Centre and several in states.

In her decision to accept the CWC's unanimous request to lead the 134-year-old party, Sonia Gandhi has displayed courage given her continuing frail health, sources said.

Once considered an unlikely heir to the grand political legacy of the Gandhi family, Sonia went on to create history as the longest serving president from 1998 to 2017.

In her political innings defined by a successful coalition experiment in the form of UPA, Sonia Gandhi has always credited mother-in-law and former prime minister Indira Gandhi for her achievements.

Bringing disparate political groupings together on one platform in a pre-poll coalition to stump the BJP out of power in 2004, was one of her biggest successes.

Though the UPA floundered in its second innings starting 2009, Sonia Gandhi helmed the coalition from the shadows, often inviting the criticism of running a cabinet parallel to that of former prime minister Manmohan Singh who led the Congress-led alliance government.

Sonia Gandhi lost no time to resign from the Lok Sabha when the office of profit controversy gripped her over her role as chairperson of the National Advisory Council during UPA-1. She returned to the Lok Sabha with a higher margin in a re-election.

But in the 2019 general elections, Sonia Gandhi's victory margin in her traditional Rae Bareli seat plummeted to 1 lakh, like never before, signalling changing contours of politics under an aggressive BJP.

Gradual decline in Congress electoral fortunes under Rahul Gandhi, desertions from Congress to BJP, deepening division in opposition ranks and a surging BJP were some factors that seemed to have weighed on Sonia Gandhi's mind when she accepted the CWC suggestion on Saturday.

Her return coincides with a critical election season with polls in Haryana, Jharkhand and Maharashtra due later this year. Her first challenge would be to fight the BJP in these states having seen Congress getting reduced to just four states under her son.

After Congress' lackluster performance in the first session of the new Parliament, party leaders hope Sonia Gandhi's leadership will reinvigorate the cadre and bind the ranks that have reeled in a leadership vacuum after Rahul Gandhi resigned as party president on May 25.

It is also felt Sonia Gandhi's return will give reason for a divided opposition to come together to fight the BJP.

This is exactly how things unfolded starting 1998 after she took charge as Congress chief. The party was then in tatters at the Centre and in power in only four states. She assumed charge, united the opposition and bound the party which had seen record desertions under past chief Sitaram Kesri.

As Sonia begins her fresh innings, her toughest so far, she is bound to find herself in familiar territory a demoralised and desertion-hit Congress, a disunited opposition and a surging BJP.

Congress leaders however feel she has all it takes to hit back, silence and dignity being her most lethal weapons.

The BJP on the other hand may again rake her foreign origins, a touchy subject for Sonia Gandhi, who lost colleagues like Sharad Pawar on this count. But over the years even Pawar has made peace with her.

Though the NCP has denied talks of merger with Congress, the grand old party might urge all its former members to return.

It remains to be seen how Sonia Gandhi reconciles with the new political landscape where the BJP has almost made coalition politics redundant.

Having picked up Hindi, a language alien to her, and having won many hearts, she will again be counted upon to deliver big.

Born to Italian parents in Lusiana, Vicenza (Italy), on December 9, 1946, Sonia met late PM Rajiv Gandhi in England where she was studying. The two got married in 1968.

Contemporary history recalls how she cradled Indira Gandhi's body after she was gunned down by her bodyguards, and tried to persuade her husband, who was assassinated in 1991, not to take up the PM's post.

Sonia Gandhi took primary membership of Congress in 1997 and became its president in 1998. She was first elected to Lok Sabha from Amethi in 1999.

In 2004, she shifted to Rae Bareli to accommodate son Rahul in Amethi.The same year she steered the party's electoral campaign and led it to victory.

Sonia Gandhi went on to decline prime minister ship nominating Manmohan Singh for the post, a move many read as a political masterstroke. Behind the scenes she remained the supreme Congress leader as UPA chairperson.