Advertisement
Home / India / Sonia asks: Are we ready for struggle?

Sonia asks: Are we ready for struggle? 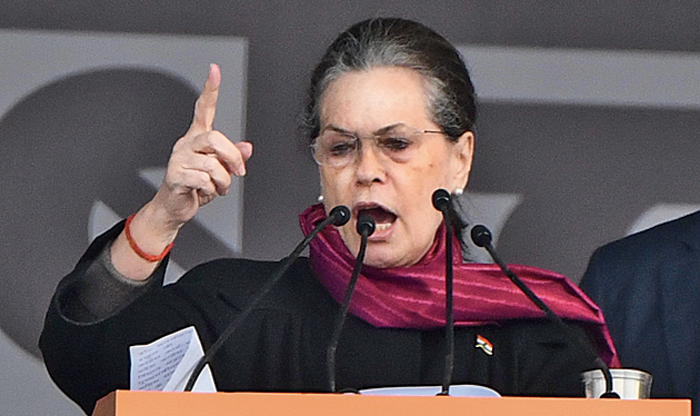 The Congress on Saturday argued that tolerating injustice is a crime and called upon people to step out of their homes and join the struggle to save the idea of India and constitutional democracy.

At a massive rally at Delhi’s historic Ramlila grounds, the top Congress leadership painted a grim picture of the country, blaming the Narendra Modi government for inflicting immeasurable misery on the people through incompetence and destructive policies. They listed the acute economic slowdown and unemployment, continuing agrarian distress, and the social strife caused by CAB-NRC and called for a mass movement.

“To tolerate injustice is the biggest crime. Raise your voice and tell the Modi-Shah government that we are ready to make any sacrifices to protect our democracy. We are ready for a sustained struggle to save the Constitution,” party president Sonia Gandhi said.

“They were desperate to bring a new citizenship law for a long time. Modi-Shah have no concern that this citizenship law will injure the soul of India. We have seen what is happening in the Northeast. I can say with certainty that the fundamental character of our country does not allow such divisive steps. I give a commitment that the Congress will stand with anybody facing injustice,” Sonia continued.

Explaining how many issues were crying for attention and mass struggle — the plight of farmers, rising unemployment, economic crisis, women’s security, industrial slowdown and divisive legislation — she said, “Modi-Shah care neither for Parliament, nor democratic institutions. They have just one goal, one objective — their politics. They have just one narrow agenda — whip up emotions on contentious issues to hide real concerns. Tell me, are we or are we not prepared for the struggle?”

Sonia asked where is the black money that demonetisation was supposed to uncover. “Why has that black money not come out and who possesses that black money?” she asked. “Why is the treasury empty? Why are our Navratnas being sold and to whom? Why is people’s money not secure in banks?”

Sonia continued: “What has happened to the economy? Where are the jobs?”

“In the lives of an individual, society and nation, a time comes when you get into a do-or-die mode. Today is the time to fight for the country,” she said.

Priyanka Gandhi Vadra said the Constitution would be destroyed if the people fall to false propaganda or coercion.

“We will have to share the guilt if we remain silent today. Make up your mind, summon your courage and fight against the forces that divide, that violate the constitutional guarantees of equality. I appeal to every citizen, every Congress worker, wake up if you love this land. The best form of patriotism is to raise your voice against injustice,” she said.

“This country lives in the aspirations and struggles of masses; of farmers, workers, women, youth, students. Every citizen needs justice; it is their right. The country’s plight is so miserable today — women are not safe, criminals are protected, policies are made to burden the poor and benefit the rich, laws are made which will force millions to live like prisoners. History will identify anybody who doesn’t fight against this today as a coward.”

The rally was significant in many ways for the party. The massive crowd was managed without relying on Haryana, the traditional mainstay for public meetings in the capital, and every state contributed to make it successful. There were 4,000-5,000 people even from far-flung states like Gujarat, Maharashtra and Madhya Pradesh while the maximum crowds were from Delhi, Rajasthan and Uttar Pradesh. The rally has also given a sense of direction to party workers, who were grappling with the perception that the Opposition is dead after the defeat in the parliamentary election.

The workers hoped Rahul Gandhi will return as party president early next year and the process of rebuilding of political resistance to the Modi government will start in right earnest.