Those who committed the crime were closely connected with the Samajwadi Party, the UP chief minister said 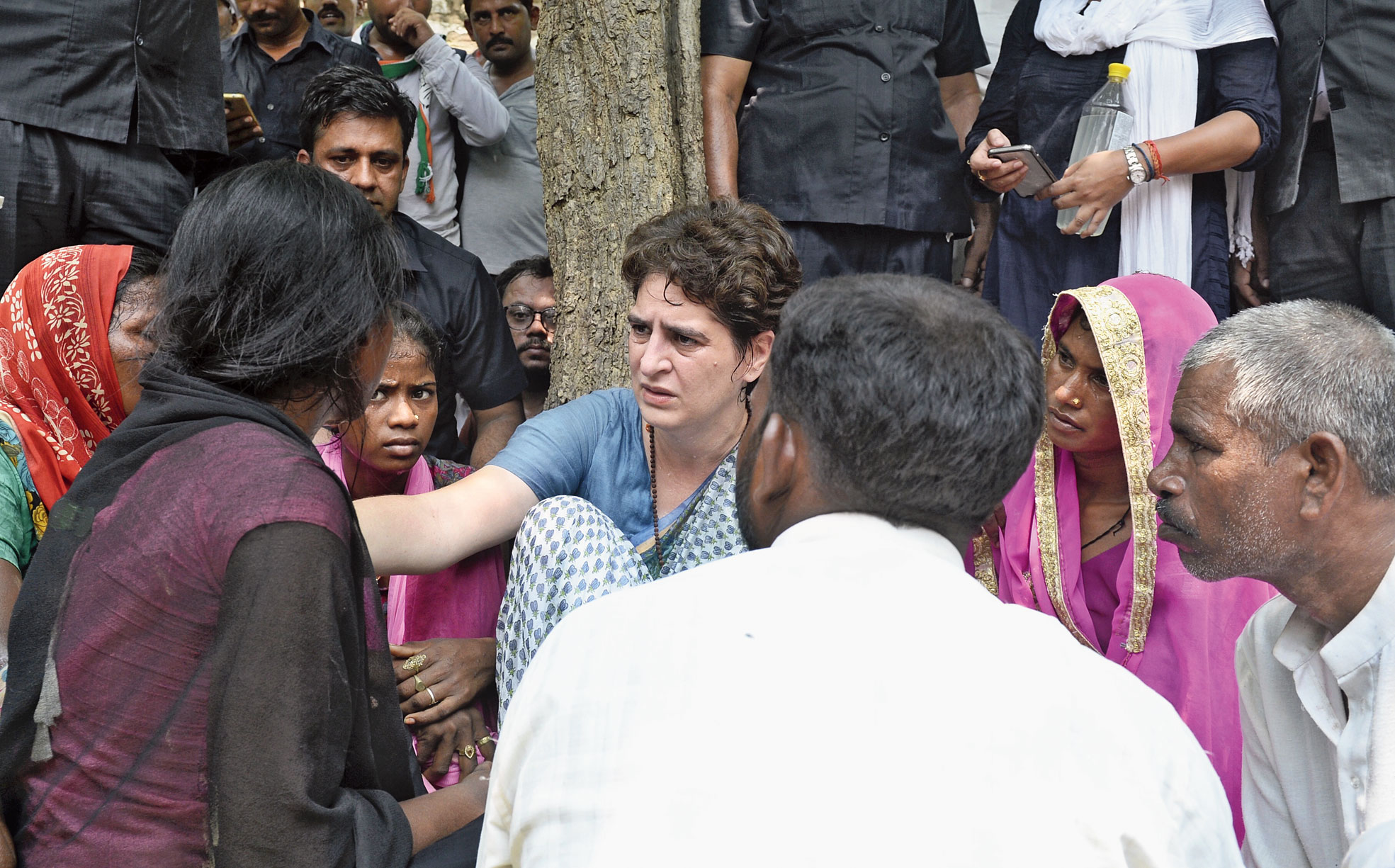 Chief minister Yogi Adityanath visited Umbha village on Sunday and met the families of the 11 slain tribal people, apparently jolted into action by Priyanka Gandhi Vadra’s eye-catching agitation, and admitted his administration could have averted the massacre with sensitive handling.

He, however, linked the killers to the Samajwadi Party and the land dispute that triggered the carnage to past Congress administrations, whom he accused of sowing confusion by failing to officially allot the vacant government plot to the tribal villagers.

He, however, ducked the question why his government had in February mutated the disputed 90 bighas in the name of Yagya Dutt Singh Gurjar, panchayat chief of adjoining Murtiya village and the prime accused in the massacre.

Adityanath merely said: “It’s true that we could have averted the massacre. Action will be initiated against the guilty officers after the revenue department submits its probe report.”

He added: “My government has already started correcting the errors of past governments but this unfortunate incident happened before we could mainstream the government land in Sonbhadra.”

Yogi Adityanath merely said: “It’s true that we could have averted the massacre. Action will be initiated against the guilty officers after the revenue department submits its probe report.”
(PTI)

The 11 victims, members of the Gond community, were killed allegedly by an armed gang led by Gurjar, who wanted to get possession of the plot, which the tribal people claimed as their own.

Priyanka, arrested and lodged in a government guesthouse in Mirzapur district when she tried to visit Umbha on Friday, sat on a 21-hour dharna to force the administration to let her meet relatives of the victims who had arrived at the guesthouse on Saturday.

At an impromptu news conference that Priyanka held just outside the guesthouse on Saturday, the relatives of the slain villagers had accused the Adityanath administration of “insensitivity towards tribals”.

They said they had repeatedly visited revenue officials and the police, asking them to stop Gurjar from harassing them and saying their lives were in danger, but they didn’t act.

On Sunday, Adityanath ignored the reporters’ question whether his government had not had the biggest role in the tragedy, and whether the mutation in Gurjar’s name had been done on the basis of forged documents.

Asked again, he only said that several police officers and a sub-divisional magistrate had already been suspended and that he had ordered a probe into how the revenue department had handed over government land to an individual.

The Congress ruled the state in 1955 and 1989 while in 2017, the Samajwadis had been in power till March before Adityanath took over as chief minister.

“This sin was committed during the Congress’s tenure: the land belonging to tribal people was transferred in 1955 to the trust of the then Congress MLC. The probe committee will also investigate this,” a PTI report quoted him as saying.

Adityanath said the inquiry would be completed in 10 days. He promised to probe every land-grab case and punish the “land mafia” under the stringent National Security Act.

The chief minister had arrived at Umbha in a convoy of about 30 cars along with new state BJP president Swatantra Dev Singh and more than 100 party members. The orders banning the assembly of five or more people in the area, imposed to stop Priyanka visiting the village, were still in force this evening.

Adityanath announced a slew of steps: houses for Dalit, tribal and Musahar communities “within a year”, toilets, electricity and cooking gas connections, widow and disability pensions, ration cards for all, a police outpost, a fire station and an anganwadi centre.

He raised the compensation to Rs 18.5 lakh each for the families of the dead and to Rs 2.5 lakh for each injured.

Priyanka took a dig at Adityanath over his visit, saying “acknowledging one’s duty is good”.

“Only when thousands of Congress workers and justice-loving people extended their support to the affected families of Umbha, then the Uttar Pradesh government felt that some serious incident has taken place,” she tweeted.

“All the announcements, which have been made today, must be implemented at the earliest.”