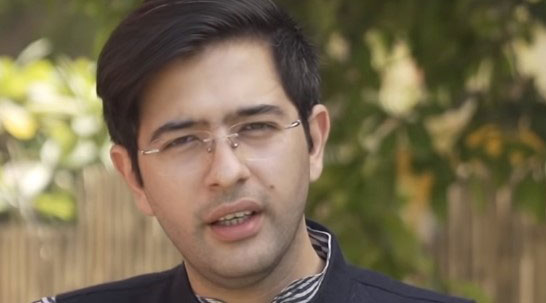 Aam Aadmi Party MLA Raghav Chadha on Thursday tore an eviction notice to slum dwellers from the railways at a media conference, amidst criticism of inaction by his party that rules the national capital.

On August 31, the Supreme Court had ordered the clearing of 48,000 hutments along railway tracks in the capital within three months. The court also prevented any stay orders on the eviction by any other court, notwithstanding a 2015 order from Delhi High Court that stalled such removals until a survey of those who live in the slums was completed.

Civil society groups have demanded that the Delhi government file a review petition against the order, which could jeopardise the efforts to contain the Covid-19 pandemic in the capital that is fast exhausting its capacity of critical-care facilities.

He added: “I have with me various notices served by the BJP-ruled central government. One such notice, which was put up at the houses of slum dwellers in the Tughlakabad area, ordered that they have to vacate their houses by September 11 (Friday). After this, their houses will be demolished. At the same time, in some other areas notices were issued noting that by September 14 (Monday) the slum dwellers will need to vacate their houses.”

Chadha’s actions came after the BJP demanded that the AAP government move the slum dwellers to unoccupied homes constructed on the outskirts of the capital a decade ago. Several slum dwellers who were relocated there moved back to other slums due to the lack of civic amenities and jobs in those areas.

In a news conference on Wednesday, leaders of the BJP — the main Opposition party in the city — said the AAP’s promises to resettle slum dwellers in proper homes has remained a non-starter since 2016. BJP’s Delhi unit president Adesh Gupta said that the Delhi Urban Shelter Improvement Board was yet to reveal how it had utilised Rs 11.25 crore given by the railways for the resettlement in 2017 on orders of the National Green Tribunal.

As the AAP’s strategy on the eviction order remains unclear, the CPIML-Liberation held demonstrations in all the slums along railway lines in the capital. The Congress has offered to go to court on behalf of the slum dwellers if the Kejriwal government does not.

The issue has caught the AAP off guard at a time when the party has started preparations for municipal polls two years away and has been leading demonstrations by striking municipal workers — as has the Congress — against the BJP-ruled municipal corporations defaulting on their wages.

Delhi Pradesh Congress Committee president Chaudhary Anil Kumar told reporters: “The Congress government (under Sheila Dikshit) started the construction of over 64,000 flats under the Rajiv Awas Yojana. Of these, 90 per cent of houses are vacant in Dwarka, Tughlakabad, Bhalswa, Narela, Bawana and other areas. Due to the apathy of the Arvind Kejriwal government, these flats are still vacant while no new scheme has been planned or launched in the last seven years by the AAP government for slum clusters.”