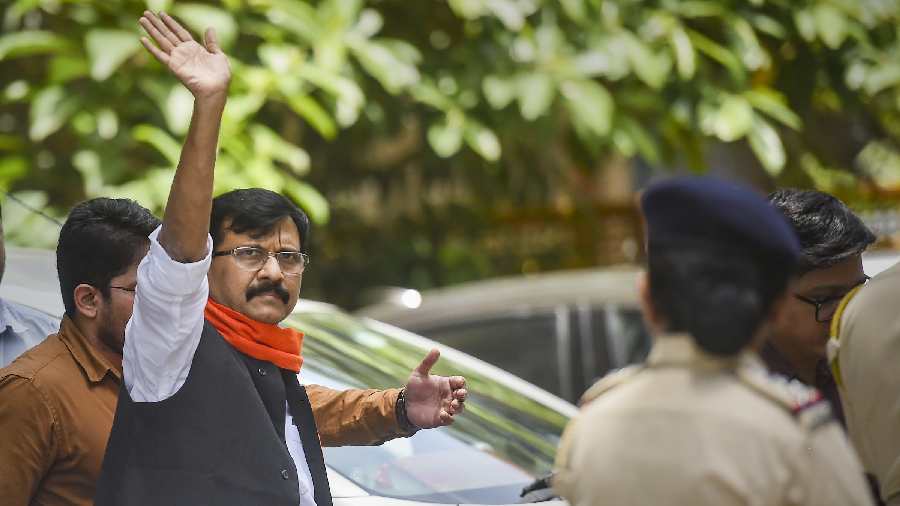 A special court here on Monday remanded Shiv Sena MP Sanjay Raut to 14-day judicial custody in a money laundering case linked to alleged irregularities in the redevelopment of a Mumbai 'chawl'.

The court allowed Raut's plea for home food and medicines, but refused to pass an order on his prayer for bedding.

The judge said that as per the prison manual, jail authorities make adequate bed arrangements.

The Enforcement Directorate (ED), which had arrested the Sena Rajya Sabha member on August 1, said that during the course of custodial interrogation, Raut did not explain about his involvement into the alleged crime.

"The release of the accused at this stage will hamper the investigation," the probe agency said in its application.

"Being a very influential person, against whom allegations of threatening of the witnesses have surfaced, it is apprehended that he may tamper with the evidence and ensure the trail of proceeds of crime is completely obfuscated," it said.

"Therefore, the accused may be remanded to judicial custody in the interest of the ongoing investigation," it added.

Raut, 60, was arrested by the ED in connection with alleged financial irregularities in the redevelopment of the Patra Chawl (row tenement) in suburban Goregaon.

He was produced before special PMLA judge M G Deshpande at the end of his ED custody on Monday.

The federal probe agency did not seek further extension of his custody.

The ED said that during the course of custodial interrogation, Raut did not explain about his involvement which was within his exclusive knowledge, and gave evasive replies.

"The investigation into the case involving proceeds of crime amounting to approximately Rs 1,039.79 crore is at a crucial stage," it said.

"Further investigations are required to be carried out to unearth the entire role of the accused and involvement of other persons to identify further proceeds of crime," the ED said.

The ED's probe pertains to alleged financial irregularities in the redevelopment of the Patra 'chawl' and related financial transactions involving Raut's wife and associates.

During the earlier remand hearings, the federal probe agency claimed Raut received a benefit of about Rs 2.25 crore from the proceeds of crime. The money was allegedly used for buying property at Alibaug in neighbouring Raigad district.

As per the ED, 47 acres of land at the Patra Chawl belongs to the Maharashtra Housing and Area Development Authority (MHADA) and there were 672 tenants living in the tenement on the plot.

The Guru Ashish Constructions obtained permission for the plot redevelopment with an additional Floor Space Index (FSI), but no actual redevelopment took place till date. The tenants were thus left high and dry, as per the probe agency.

Pravin Raut, already arrested in the case, is one of the directors of the firm.

The ED had claimed that he was the frontman for Sanjay Raut.

The probe agency on Saturday questioned Sanjay Raut's wife Varsha Raut for more than nine hours in connection with the case and recorded her statement.

He has denied any wrongdoing and called the ED case against him as "false".