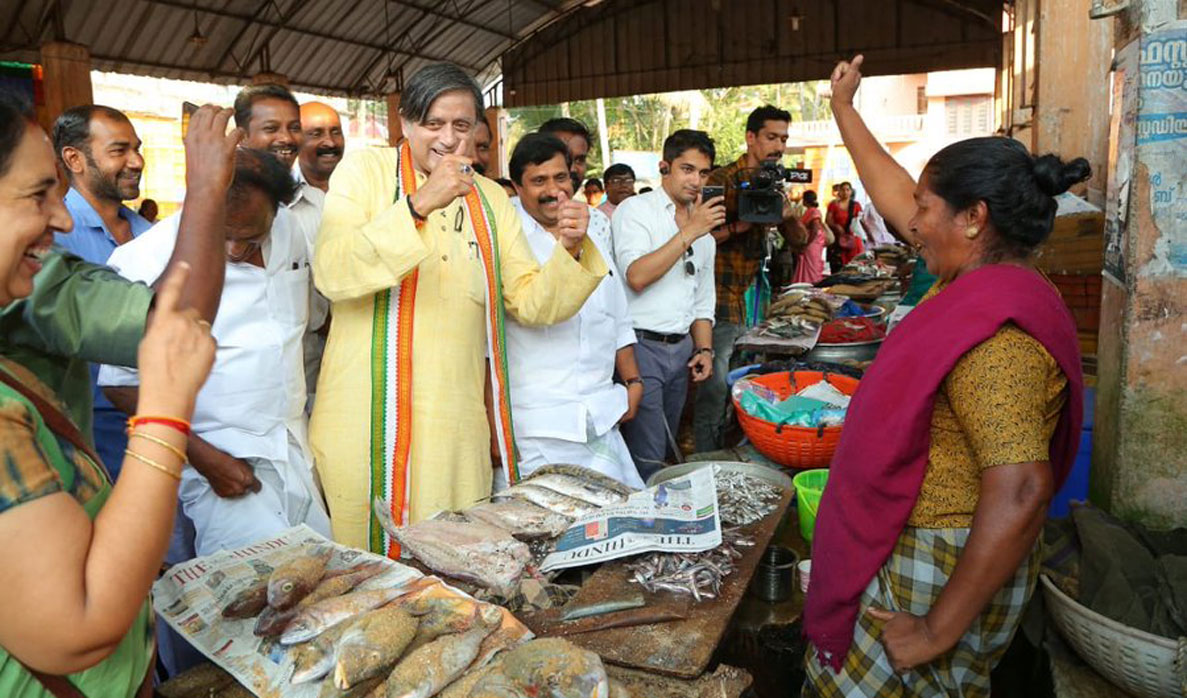 Congress MP Shashi Tharoor found himself on a sticky wicket Saturday as his tweet following a visit to the fish market here kicked up a row, with the ruling CPI(M) and BJP alleging he had insulted the fishermen community and demanded an apology.

The former Union minister, who is trying to score a hat-trick from the prestigious Thiruvananthapuram Lok Sabha constituency, had visited a fish market in the state capital recently and spoken to the women selling fish there and had also posted some pictures of his visit.

'Found a lot of enthusiasm at the fish market, even for a squeamish, vegetarian MP,' Tharoor had later tweeted.

As controversy erupted over the use of the word 'squeamish', Tharoor in another tweet quoted the meaning of the word from an online English-Malayalam dictionary 'For those Malayali leftist politicians who are currently having difficulty understanding my English'!

For those Malayali leftist politicians who are currently having difficulty understanding my English! pic.twitter.com/vhOi7hThgo

In another tweet, Tharoor wrote, 'order delivered' and put its word by word Malayalam translation as 'Kalapana prasavichu' (Kalapana has given birth)' to pinpoint the pitfalls in translations.

The CPI(M) and BJP attacked the Congress MP, saying he had insulted the fishing community by his choice of words.

BJP candidate Kummanam Rajasekharan said Tharoor should apologise and said his act of 'humiliating' the fishermen community through social media was 'extremely deplorable.'

Fishermen protested his tweet with marches in Kochi, Kollam and Kozhikode.

When reporters sought his reaction, a visibly upset Tharoor, said he was busy with campaign work and did not wish to comment.

Tharoor had in February this year recommended Kerala fishermen, whose deeds of courage were the main highlight of the rescue operations during the 2018 Kerala floods, for the Nobel Peace Prize.

'It was during the height of this tragedy that fishermen groups of Kerala, at great risk to their lives and potential damage to the boats that are the source of their livelihood, jumped into the fray to save their fellow citizens,' Tharoor had written to the chairperson of the Norwegian Nobel committee.

Found a lot of enthusiasm at the fish market, even for a squeamishly vegetarian MP! pic.twitter.com/QspH08if8Q

My most vocal supporters everywhere - women selling fish. In their inimitable way, they have embraced me on the campaign trail, and promised to get out the vote among their friends and families. pic.twitter.com/k5PKu7n7BK