A section of protesters wants to comply with the government ban, many say they will sit in groups of fewer than 50 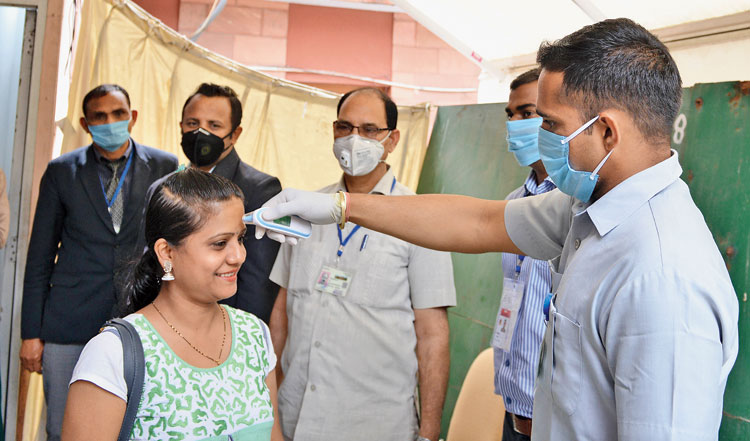 An official conducts thermal screening of a visitor at the entrance of Parliament on Monday.
Picture by Prem Singh
Pheroze L. Vincent   |   New Delhi   |   Published 16.03.20, 08:57 PM

Protesters against the new citizenship matrix in the capital said that many of them may try to continue the agitation without flouting the government ban of large gatherings to prevent the spread of the coronavirus disease.

While a section of protesters wants to comply with the government ban, many say they will sit in groups of fewer than 50 — the limit prescribed by the government for gatherings — to avoid eviction.

After Delhi chief minister Arvind Kejriwal’s news conference announcing the new regulations, resident and protester Noor Jahan took the mic at the Shaheen Bagh protest site and said: “When our documents are not accepted, the children will be separated, wives from husbands. We are scared of being separated from our own people, we are not scared of the coronavirus. If we were scared, we wouldn’t be here. Are you sisters afraid?”

“No,” the crowd yelled in response.

Kejriwal announced more stringent regulations under the Epidemic Diseases Act, 1897. In addition to education institutions, cinema halls and public swimming pools which are already shut, the government on Monday ordered gyms, spas, nightclubs, theatres and weekly markets — where vegetables are sold on streets — to be shut until March 31.

Asked if Shaheen Bagh’s protesters would be advised to move, Kejriwal replied: “It applies to all, whether it is a protest or anything else.”

At Shaheen Bagh, Noor Jahan said: “We want to tell Kejriwalji that you spoke too late, and when you finally did, you spoke about the coronavirus. You should have spoken about the NRC (National Register of Citizens), the CAA (the Citizenship Amendment Act) and the NPR (National Population Register).”

Delhi’s ruling Aam Aadmi Party had opposed the Citizenship Amendment Act in Parliament in December, and the Delhi Assembly passed a resolution against the update of the National Population Register and the National Register of Citizens last week.

While the number of protesters has dwindled at all the protest sites in the capital, the agitation continues with many wearing facemasks.

Javed, an organiser at the protest at South Delhi’s Hauz Rani, said: “We have not got any notice, nor has an official asked us to move today. We may sit in groups of less than 50 with a distance of a few metres between each group. We are yet to decide how to respond to the coronavirus threat but people here are taking all possible precautions.”

Sources in Shaheen Bagh said similar plans were afoot there too.

The Supreme Court had ordered interlocutors to find a solution to the traffic blockade with the protesters, and the hearing in the case was postponed to March 23, after rioting in Delhi, last month.

Shaheen Kausar, one of the leaders in Shaheen Bagh, said: “Through the interlocutors, we will continue to request the Supreme Court to allow the protest on one side of the road with police protection. On the other hand, we will continue to advise people not to come in large numbers here because of the health risks and try to gradually reduce the numbers.”

A lawyer associated with the Shaheen Bagh movement said that after the Supreme Court had postponed all cases that are not urgent, including a petition against obstruction of traffic by the Shaheen Bagh protest, there is no pressure on the protesters to arrive at a compromise.

“We wanted the chief minister to meet the protesters before the Assembly passed the resolution, to overcome the feeling of neglect by the state. We could have then worked out a face-saving settlement with the interlocutors, which could include a stay on forceful eviction, and permission for a small protest on one side of the road. This may have also brought some legal protection to other protests in India,” said.

“After the order today, and the postponement of the hearing, we now expect the police to start detaining protesters from their homes, one by one, like they have done in northeast Delhi. However, there has been a psychological transformation among the women, who are in the media limelight for the first time, and any attempt to call off the agitation only leads to more militant voices among them taking precedence,” he added.

What do today's women want?