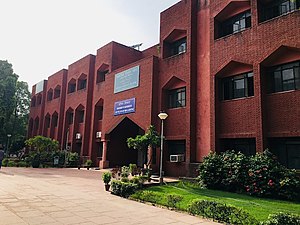 Jamia Millia Islamia Vice Chancellor Najma Akhtar on Wednesday accused a students group planning to screen the controversial BBC documentary on 2002 Godhra riots on the campus of "disturbing peace and harmony", and asserted that she will not allow such a behaviour in the varsity under her watch.

The screening of the documentary, the access of which was recently blocked by the Centre on social media platforms, was announced by the Students' Federation of India (SFI) on Wednesday. The move, however, elicited sharp reaction from the varsity administration and led to the detention of several students by the Delhi Police.

"We do not want any disturbance on the campus. We desire to keep peace and harmony in the university where students are studying and giving exams," Akhtar told PTI.

Asked whether any action will be taken against the protesting students, the VC said the authorities will ask for a report and "take action against the students, if necessary". The Jamia unit of SFI, a leftist group, had on Tuesday announced the screening of the documentary "India: The Modi Question" and released a poster. It had said that the same would be screened at MCRC lawn gate number 8 at 6 pm on Wednesday.

The varsity administration had denied permission for the event and warned about action against the erring students.

Jamia Millia Islamia on Wednesday witnessed a heavy deployment of police personnel as scores of students protested against the detention of four activists over the proposed screening.

Delhi Police on Wednesday said they detained four students after the SFI announced its plan to screen the controversial documentary on the campus. SFI later claimed that 70 protesters were also detained by the police.

The university administration said it was taking all measures to prevent people and organisations with a "vested interest to destroy the peaceful academic atmosphere of the university".

The university had earlier issued a memorandum/circular reiterating that no meeting/gathering of students or screening of any film shall be allowed on the campus without permission from the competent authority.

"We firmly stand against police’s attempts to silence the democratic voices and rights of the students and citizens. Universities and campuses must have an environment that offer free and fair dialogue and debates under constitutional values," it said.

In a bid to quell the protests, the administration locked the varsity gates and prohibited all entries. Only those students who had an exam at 5.30 pm were allowed to enter the campus.

The SFI's attempt to screen the documentary at the Jamia campus comes a day after a similar event was organised at Jawaharlal Nehru University during which students claimed that power and Internet were suspended and stones hurled at them.