The firing was condemned by separatists as well as mainstream politicians 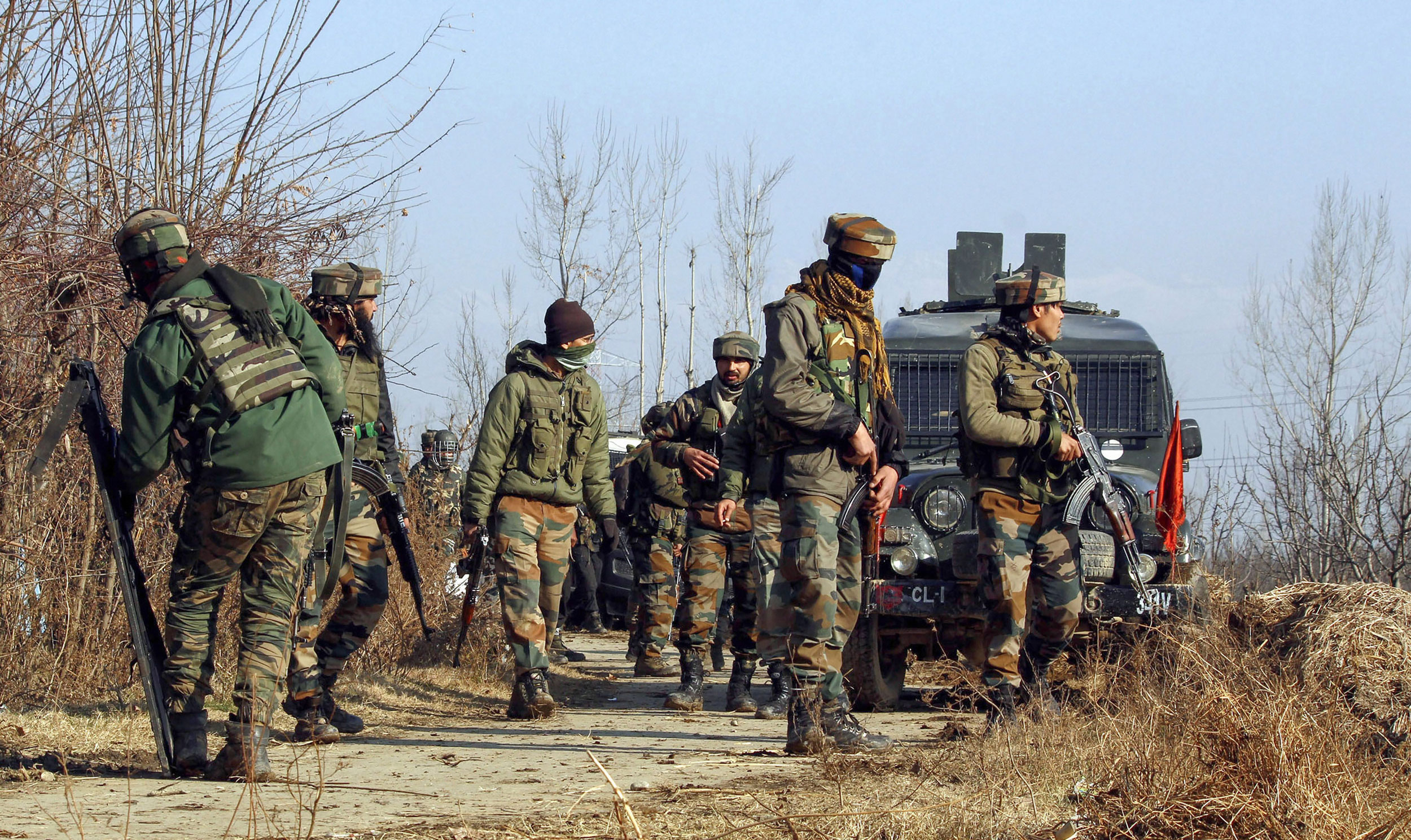 Soldiers take positions during an encounter with the militants at Sirnoo in Pulwama district of south Kashmir, on Saturday.
(PTI Photo)
Muzaffar Raina   |   Srinagar   |   Published 15.12.18, 10:24 PM

Seven ordinary people died as security forces fired on an unruly mob that had gathered during a gunfight with militants, recording the highest civilian toll near a Kashmir encounter site and leaving the Valley staring at a fresh bout of unrest.

Saturday’s firing in a south Kashmir village, which also injured dozens of people and where the dead included a 13-year-old schoolboy, drew condemnation from the separatists as well as mainstream politicians.

Former chief minister Omar Abdullah termed it a “massacre” and moderate Hurriyat chief Mirwaiz Umar Farooq asked people to march towards the army’s Valley headquarters in Srinagar, daring the government to kill all of them.

The gunfight at Sirnoo in Pulwama district had broken out early in the morning and lasted only 25 minutes, leaving three militants and a soldier dead. But as the mob that had gathered erupted in protest, the troops fired on it.

Scores of ordinary people have fallen to the forces’ bullets since 2016, when a trend began of mobs thronging encounter sites and stoning the security personnel to try and help the militants escape. But never before has the civilian toll crossed half a dozen in such instances.

Sources said the forces had rained bullets and pellets on the mob at Sirnoo. Officials said several people took bullets to the chest or head, indicating the troops had fired to kill.

The killings have punched a fresh hole into governor Satya Pal Malik’s claim that violence was ebbing in the Valley.

Malik has ordered a probe by the divisional commissioner into the firing and appealed to people to stay away from encounter sites, a PTI report said quoting an official spokesperson.

The governor has directed the security forces to give people time to vacate an area before an anti-militancy operation, and to minimise collateral damage, it added.

Among the militants killed was Zahoor Thokar, a soldier who quit his job to join the insurgents last year, and Adnan, a policeman’s son — a sign that the rebels are drawing recruits even from families expected to be on the forces’ side.

The youngest among the seven civilians who died was Aaqib, 13, a Class VIII student. Abid Ahmad Lone, another who died, had earned an MBA from Indonesia. He is survived by his Indonesian wife and their three-month-old daughter.

A police spokesperson claimed the crowd had come dangerously close to the encounter site while the operation was under way. He did not clarify how the civilians were killed.

“The loss of civilian (lives) is deeply regretted,” he said.

Another police officer said the mob had reacted violently but acknowledged there had been fewer casualties in the past even in the face of heavier odds.

“I once had to flee 4km to escape a stone-throwing mob, all to prevent casualties,” the officer, who has served in south Kashmir, said.

Massive protests broke out across the Valley, leading to clashes and prompting the forces to suspend Internet and impose curbs on movements. The separatists have called for a three-day shutdown.

The Mirwaiz asked people to march towards the 15 Corps commander’s headquarters in Srinagar on Monday, challenging New Delhi “to kill all of us at one time rather than killing us daily”.

The separatists routinely call for marches but have rarely asked people to march to an army formation.

Omar tweeted: “7 dead. There is no explanation for this excessive use of force, none whatsoever. This is a massacre & that’s the only way to describe it.”