Is the ‘double mutant’ variant at work? We will know only sequencing of the coronavirus is scaled up and relevant data studied 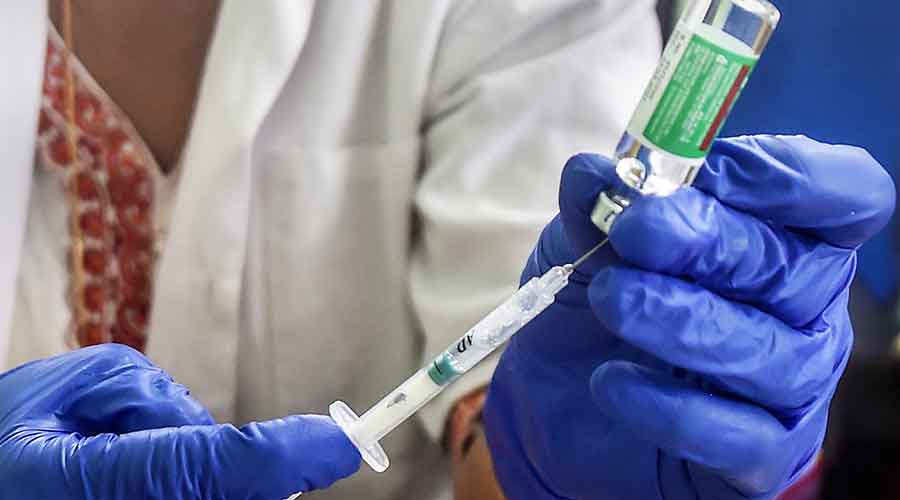 The government has opened up vaccinations to everyone over 18 from May 1 onwards even as India’s second Covid-19 wave hit a record 273,802 new infections in the last 24 hours with no peak in sight. Aggressive containment steps along with enforcement of strict Covid protocols like masking and curbing public gathering are needed to tame the infection tsunami, experts say. “We’re seeing classic exponential growth,” says one medical expert, “and it’s being driven by more contagious mutations, super-spreader election rallies and religious events and reckless individual behaviour.”

“It will take three to four months to substantially ramp up vaccine production which must be done. So, right now the best defence is what we can do ourselves,” says virologist Shahid Jameel. “The protection is to mask up, socially distance and avoid crowds,” he says. In fact, wearing two masks rather than one “makes common sense” as double-layering not only adds filtration but helps cover mask gaps, says White House Advisor Dr Anthony Fauci.

The second wave is already far more severe than the first one which peaked at 97,000 daily new cases last September. How bad can this surge get? Infection modeller Brahmar Mukherjee has suggested India could peak at around 300,000 to 400,000 new infections daily but experts are quick to add there’s no certainty on what could be the possible highest number.

“The peak is not (yet) visible,” Jameel says. India could see a short spike and a fast fall as has been witnessed in other countries (it’s known as the “phenomenon of the second surge) and some experts suggest that the worst-hit state, Maharashtra, might start turning the corner at the end of April or in early May.

Most healthcare experts did not anticipate a second wave as catastrophic as the one the country now is suffering. After new infections slid to a tenth of the country’s previous peak, some politicians and scientists even said India’s pandemic was in the end game. With the beginning of the vaccine rollout, complacency set in. “Hospitals were also thinking the worst was over,” said a government health official. “People also thought there would be some magic with the vaccine,” he added.

Doctors say the variants -- the UK one B.1.1.7 and the potentially more contagious Indian “double mutation” that may be better at evading immune systems -- are making the situation even more unpredictable. India has now topped both Brazil and the US in its daily fresh infection count. (And the infection numbers could be undercounted as testing facilities are being overwhelmed and India has always lagged behind many other countries in daily testing relative to the size of its population.

The Government says there have been fewer fatalities in the current wave. The ICMR Director-General Balram Bhargava, however, said more patients are coming to hospitals short of breath and needing oxygen.

Another government expert says that mutant strains “are playing a big role in Bengal” where there have been large state election rallies. “A big chunk of the new infections there are definitely variants,” he said.

And, as in other countries, in contrast with the previous wave, younger people account for the many of the Covid cases. That’s led both Delhi and Maharashtra to push the central government to open up vaccinations to age groups over 18. Some young people are going from hospital admission directly to the ICU. And children are also getting infected. Last month, in Bangalore for instance, 472 children below 10 fell sick with Covid. Younger people have been “revolting. They are refusing to wear masks. And, they are falling ill with COVID-19 in large numbers,” says Partha Majumder, the government’s National Science Chair. Majumder who has been doing a study on hospitalised infectious cases for over a year. “In this surge, our samples are mostly from the young.”

The latest lineage called B.1.617 which has two mutations -- the E484Q And L452R -- was originally reported late last year by a scientist in India and has now leapt to 10 other countries including the UK, Australia and Germany. So far, the Indian government which acknowledged the existence of the double mutant late last month isn’t calling it a “variant of concern.” However, in some Maharashtra districts, the variant was detected in over 60 per cent of new infections.

“Having two of these mutations, which have been seen in other variants around the world, (combined) are concerning,” says Maria Van Kerhove, the World Health Organization’s technical lead officer on Covid. The double mutation makes it easier to break into the human immune system and is more efficient in attaching itself to the human host cells and multiplies more swiftly, doing more damage than the original Covid strain.

The Government of India has established the Indian SARS-CoV-2 Consortium on Genomics” (INSACOG) – an all-India network – to rapidly identify and track genomic variations arising in the SARS-CoV-2. However, INSACOG is sequencing only about 1 per cent of the COVID-19 samples collected.

“Unless sequencing of the coronavirus is scaled up, and relevant data are collected and compiled rapidly and systematically, we will never be able to know whether the “double mutant” is a variant coronavirus of concern and is a significant factor in the current surge in infection,” says Majumder. However, the National Institute of Virology in Pune has reported that out of 361 Covid samples taken from Maharashtra from January to March and genome sequenced, 61 per cent had the double mutation.

The biology journal BioRiv said the L452R mutations “significantly increased infectivity” and lowered antibody efficacy compared to the SARS-CoV-2 spike protein without mutation and “warranted close surveillance.” The L452R mutation is estimated by US researchers to boost transmission by 20 per cent and lower antibody efficacy by more than 50 per cent. If this variant becomes dominant and is capable of so-called “immune escape” behaviour -- ie is able to evade post-infection or post-vaccination antibodies, it could have major implications for India, and also the world’s vaccination rollouts.

Indeed, India is not the only country facing a surge in infections amid continued setbacks globally in rolling out vaccinations. Sixteen months since the outbreak of Covid, the pandemic’s trajectory is “growing exponentially” with more than 4.4 million new cases reported over the last week, says Kerkhove. Cases climbed globally by 9 per cent worldwide last week, marking the seventh straight weekly rise.

“This is not the situation we want to be in 16 months into a pandemic where we have proven control measures,” says Kerkhove. “Vaccines are coming online but everyone has to take stock and have a reality check of what we need to be doing,” she says.

More than 80 per cent of India’s cases are being recorded in 10 states, including Punjab and Maharashtra, Maharashtra, Chhattisgarh, Karnataka, Uttar Pradesh and Kerala. In a departure from the previous wave, the infections have fanned out to smaller towns and remote regions with fewer health services. Health officials also say the reported figures are not current because testing centres are being overwhelmed by the rising numbers.

In Kerala, where infection numbers have been steady for several months, the number of cases climbed to over 18,257. State government officials attributed the higher number to increased surge testing carried out over the last two days to get a broader picture of the situation.

Back on February 13, the weekly average positivity rate of Covid-19 testing fell to a record low of 1.47 per cent but then it started rising.

The average was 10.7 per cent in the most recent week. A positivity rate of 5 per cent is the threshold for considering the pandemic to be under control, according to the WHO.

The only silver lining may be that the death rate could be lower than in the previous wave, said the government official. “The protocol has been standardised. The fatalities may be less because the medical professionals know more how to deal with Covid,” he said.