Farmers have a right to protest but cannot block roads: Supreme Court 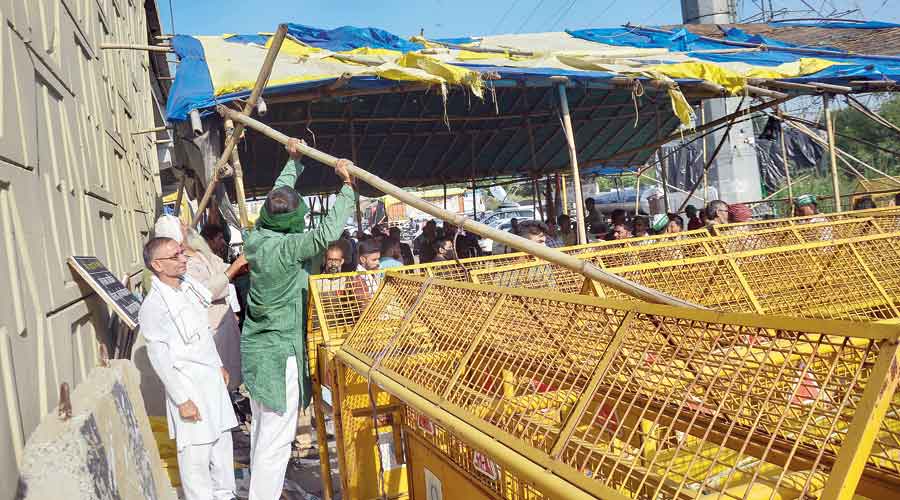 Farmers try remove a tent near a barricade on a road leading to Delhi near the Ghazipur protest site on Thursday after the Supreme Court said roads cannot be blocked. The Bharatiya Kisan Union (Tikait) said the barriers had been placed by the police, not the farmers. “The public is suffering because of the police,” BKU leader Rakesh Tikait said. “If you see, there are only barricades which have been put by the police,” he said.
PTI
R. Balaji   |   Published 22.10.21, 01:26 AM

“The law is clear. You have a right to agitate but the roads cannot be blocked. Why the blockage has taken place, how it has taken place, has to be resolved,” Justice Sanjay Kishan Kaul told senior advocate Dushyant Dave, who was appearing for certain farmers’ organisations.

The bench of Justices Kaul and M.M. Sundresh was hearing a public interest plea from a Noida-based woman who has sought removal of the road blocks put up since last November on Delhi’s borders, where farmers have been protesting three central farm laws.

Dave told the court the blockades were a result not of the farmers’ protest but of the police’s security measures. He said the blockades only suited the government’s interests.

“The roads have been blocked due to the way Delhi police have made the arrangements. It suits them to allow a feeling that farmers are blocking the road,” Dave said.

Justice Kaul said: “The law is laid down. There’s nothing more to be laid down. You can tell them that their cooperation will help in resolving the issue.”

He was referring to an earlier apex court judgment that said protests can be held only at notified locations and should cause no inconvenience to citizens.

Dave recalled that on December 17 last year, a three-judge bench headed by then Chief Justice S.A. Bobde had said it could not pass any order to remove the protesters. He said the bench had observed that the “right to protest is sacrosanct”.

“We are not getting into (the) challenge to the (farm) law(s) and (the) protest. This is only about blocking of the road,” Justice Kaul said.

Solicitor-general Tushar Mehta, appearing for the Centre, argued that when the court made the December 17 observation, the issue before it was not the road blockades but the constitutional validity of the three farm laws.

He said that of the 44 farmer organisations protesting on Delhi’s borders, just two had appeared before the court.

“When this court took up the issue regarding the challenge to the (three) acts for the first time, these farm unions were also called. They refused to appear before the court,” Mehta said. “The court took the unprecedented step of staying the operation of a law. The agitation is for some other reasons.”

Dave countered: “The agitation is for repeal of the farm laws. The SG is trying to attribute something to farmers.”

He said the solution was to allow the farmers, massed on Delhi’s borders for 11 months, to enter the city and agitate on the Ramlila Maidan which, with Jantar Mantar, makes up two of the capital’s most prominent protest sites.

“After stopping us, the BJP held a rally at Ramlila Maidan with 5 lakh people. Why is there this selective permission?” Dave asked.

The bench later clarified that the present matter mainly concerned the road blockades and not the farm laws. It said that if necessary, the matter would be tagged with the larger issue relating to the three laws that have been challenged by a bunch of petitions.

The next hearing will be on December 7.