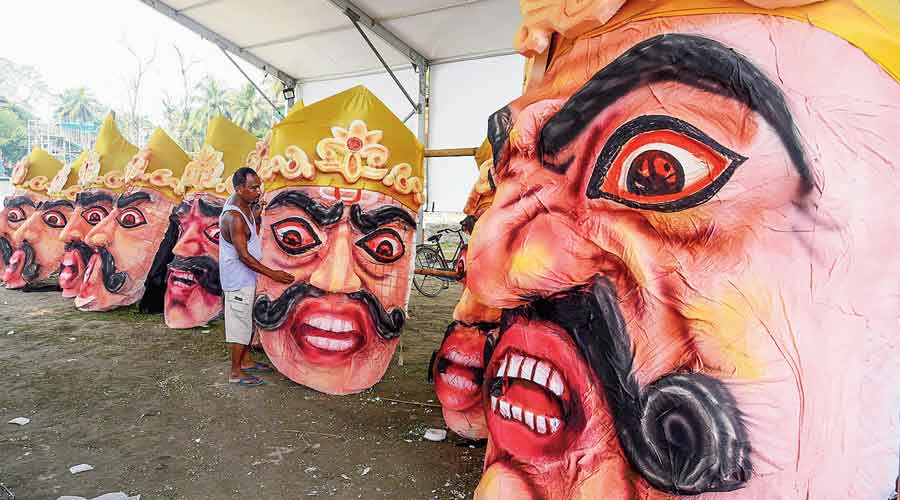 Effigies of Ravan being lined up in Guwahati on Saturday. The Samyukta Kisan Morcha has said effigies of BJP leaders, including the Prime Minister, will be burnt across the country this Dussehra in protest against the Lakhimpur Kheri massacre of farmers.
PTI photo
Anita Joshua   |   New Delhi   |   Published 10.10.21, 12:18 AM

Farmer unions on Saturday termed the Lakhimpur Kheri carnage an “act of terror” that was part of a larger conspiracy to break their 10-month-old protest, and said the “massacre” was to their movement what Jallianwala Bagh was to the freedom struggle.

The unions have drawn up a protest programme that will seek to tap emotions with the ashes of the Lakhimpur Kheri victims taken to every part of the country.

The Samyukta Kisan Morcha (SKM) announced a month-long agitation that would culminate in a mahapanchayat in Lucknow on October 26 if Union minister of state for home, Ajay Mishra Teni, was not dismissed and arrested with his son Ashis by Monday.

The announcement came at a news conference in Delhi where Bharatiya Kisan Union spokesperson Rakesh Tikait commanded the most interest amid speculation about him having “turned” and helped the government broker an “agreement” with the farmers of Lakhimpur Kheri on Monday.

Although SKM leaders had earlier clarified that Tikait had not acted alone and various other union leaders were involved in the five rounds of negotiations with the administration, the speculation has persisted. The news conference on Saturday seemed an attempt to put a lid on the controversy.

Tikait made it clear there was no question of giving up the agitation midway, saying: “Sangharsh se samadhan (resolution through struggle) is our motto.”

He explained that Monday’s agreement had been a limited one to ease the tensions building up, with the bereaved families having refused to cremate their dead without some form of assurance from the administration.

Given the importance the SKM attaches to the movement remaining peaceful, union leaders were keen to ensure the tensions did not flare up, knowing this was exactly what the government was hoping for.

BKU-Ekta (Ugrahan) leader Joginder Singh Ugrahan said that after failing to discredit the movement by branding it “Khalistani, Pakistani, Naxals”, the BJP

government was now resorting to direct violence to break the agitation.

He cited the provocative statements by Haryana chief minister Manohar Lal Khattar (since withdrawn) asking party cadre for “tit-for-tat” action against the farmers, a sub-divisional magistrate in Karnal ordering police to break the heads of protesting farmers, and now farmers being run over and killed in Lakhimpur Kheri.

“They want to provoke us into violence, but we will not fall into this trap,” Ugrahan said.

On reports of farmers in Lakhimpur Kheri beating to death two people after a car belonging to Teni had mowed down five people, Tikait said: “It was a reaction to an action; it was not planned.”

He added: “When two cars meet with an accident here, even educated people — fully aware that they can claim insurance — block the road and fight with each other.”

Yogendra Yadav of the Jai Kisan Andolan, an SKM constituent, stepped in to highlight that the law distinguishes between premeditated murder and reactive killing.

“At the same time, the SKM believes that every person killed in the incident — irrespective of political affiliation — should get justice,” he said.

Yadav said that if the government failed to meet the SKM’s demands by Monday, the protest programme would be set in motion.

Either way, October 12 will be marked as Shaheed Kisan Divas across the country as it coincides with the antim ardas (final prayers) for the farmers killed on October 3.

The SKM has urged farmers across the country to pay tribute to the slain farmers by attending the event at Tikunia in Lakhimpur Kheri or organising prayer meetings at their own places on Tuesday.

Candlelight marches will be organised that evening. The SKM has urged all citizens to light five candles in memory of the five “martyrs” — the four farmers and one journalist killed by the speeding cars — outside their homes at 8pm.

If its demands are not met, the SKM plans to hold a Shaheed Kisan Yatra from Lakhimpur Kheri to every district of Uttar Pradesh and to every state, carrying urns containing the slain farmers’ ashes.

In each state, this journey will conclude at a local holy place or historical site.

On Dussehra, effigies of BJP leaders, including the Prime Minister and Union home minister, will be burnt across the country.

This will be followed up with another rail roko on October 18, after which the mahapanchayat will be held in Lucknow on October 26, Yadav said.