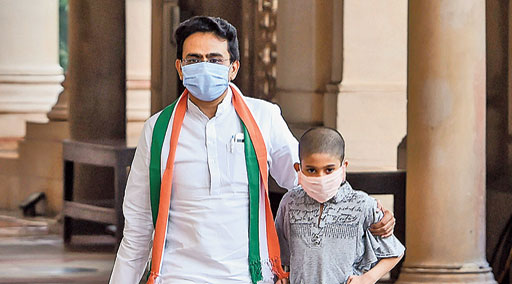 The internecine strife in the Congress may be far from over but both sides appear to have realised its futility and the insidious effects on the party that is arguably passing through its worst phase.

While the younger leaders publicly asserted that they bore no ill-will against the pro-people Manmohan Singh government, the seniors insisted that the need of the hour was to consolidate and dedicate all energies and resources to rebuild the party. There has been a substantial de-escalation of rhetoric even as fundamental differences persist, with Rahul Gandhi appearing to be the only person who can resolve the issue.

Sources said the top leadership, realising that the party’s own legacy was unwittingly becoming the punching bag and that Manmohan had got dragged into the crossfire despite his unquestionable neutral stand, had intervened to stop such an unintended consequence.

Young Rajeev Satav, who has just been nominated to the Rajya Sabha, took the first step by issuing a clarification on his remarks made at a meeting called by interim Congress president Sonia Gandhi on July 30.

Satav explained through a series of tweets late on Saturday night: “The meeting of Rajya Sabha MPs with the Congress president was extremely fruitful. This was one of the many platforms that the Congress has given us time & again to voice our views freely. These, though, are internal to the party & I have never been comfortable discussing what goes on inside, outside.

“Unfortunately, some motivated media reports have twisted facts. Today, a few of my esteemed colleagues and seniors have reacted on social media. This has compelled me, much against my principle of not discussing party matters on public platforms, to come out and clear the air.”

Satav added: “The malicious attempt to draw Dr Manmohan Singh into this exchange is reprehensible. To say my observations cast a shadow over Dr Singh’s leadership of UPA-II is a lie, a total misrepresentation of facts. I hold Dr Singh in high esteem. He is above reproach. Dr Singh has made commendable contributions to building modern India. He will always be held in high regard.

“I will discuss my comments, or those made by any other esteemed colleagues, on internal party forums only. UPA-II was a good government, people’s government. The success of UPA-II is reinforced when we compare it to the sharp slide under Modi. Elections are on the anvil in Bihar & Assam. BJP’s misdeeds have piled up. We need to jointly stand together under the leadership of Soniaji, Dr Singhji, Rahulji.”

While the attempts to keep the former Prime Minister out of the ugly spat and to blame the media are obvious, Satav hasn’t clarified what he meant when he said at Sonia’s meeting with Rajya Sabha MPs that the Congress’s decline had started during UPA-II and whether he held other senior ministers responsible for the rot.

But some younger colleagues jumped to defend Satav’s line that internal conversations should not have been disclosed to the media.

Manickam Tagore, a Congress MP from Tamil Nadu who is extremely close to Rahul, tweeted: “Absolutely agree with Rajeev Satav. There is merit in keeping party discussions within the party. This is the time to combine our efforts to fight and defeat Modi/Shah and RSS. Congress party workers are standing with Mrs Gandhi, Dr Singh & voice of Opposition Mr Gandhi!”

Mahila Congress chief Sushmita Dev referred to Satav’s tweets and said: “Taking up issues relating to the party within the party forum is the right thing to do. I respect that.”

It is naive to expect such deliberations to remain secret in this age of communication proliferation, especially when around 50 people were present at the meeting.

What is interesting is that the responsibility for the deeds of UPA-II, which was ousted from power in 2014, is being sought to be fixed in 2020 when the Narendra Modi regime has posed new kinds of challenges before the Congress.

Most Congress leaders and workers concede that the party needs to learn from mistakes but that involving itself in a blame game over losses suffered in 2014 and 2019 would prove counter-productive.

Even the seniors are of the opinion that the task at hand is to settle the leadership issue at once and get cracking to expose the government’s purportedly miserable performance. They say the strategies need to be altered in the face of the extreme crisis triggered by the pandemic — with both economic and humanitarian issues acquiring dangerous proportions — instead of wasting time on a futile young-versus-old narrative.

Many Congress seniors feel the concerns expressed at the July 30 meeting were about the inability of the party to exploit Modi’s failures and it should have been taken in a positive spirit.

A former minister told The Telegraph: “Nobody has a problem with Rahul’s leadership. We accepted him as the leader and fought under his guidance in 2019. If there were some deficiencies, which he had articulated in his resignation letter, those could be sorted out. There are issues about his leadership style that he should have realised after the defeat. He himself, not anybody else, disrupted the leadership and created a vacuum. What is wrong if we demand a full-fledged president immediately?”

Another senior said: “Let Rahul return to steer the ship which is adrift now. If he thought some people played mischief or were of no use, he had every right as a leader to rebuild his team. We hope he sits with Soniaji and some other senior leaders and resolves outstanding issues sooner than later. We also hope that the party functions democratically, without guerrilla wars between seniors or juniors. Don’t forget it is Kamal Nath and Ashok Gehlot who are fighting the BJP while younger ones have got nestled in the BJP’s lap.”

Congress communications chief Randeep Surjewala also appealed to both young and senior leaders to stop fighting on Twitter as the priority is to save the country from the misrule of the Modi government.

Responding to questions about the internal strife, Surjewala said: “The responsibility of the seniors is more; they have done splendid work in the party and governments and we are proud of them. Now everybody is to work in unity under the leadership of Sonia Gandhi, Manmohan Singh and Rahul Gandhi.”

Asserting that the UPA government had delivered excellent rule with revolutionary pro-people schemes, Surjewala said: “The conspiracy against the Manmohan government being referred to by some leaders was hatched by the RSS, the BJP and certain individuals who have all been rewarded by the Modi government.”

The Congress spokesperson referred to people like Kiran Bedi, Arvind Kejriwal and Ramdev, who had led an anti-corruption crusade before the 2014 elections, former comptroller and auditor-general Vinod Rai and a section of the media while speaking about the “conspiracy” to defame the UPA.