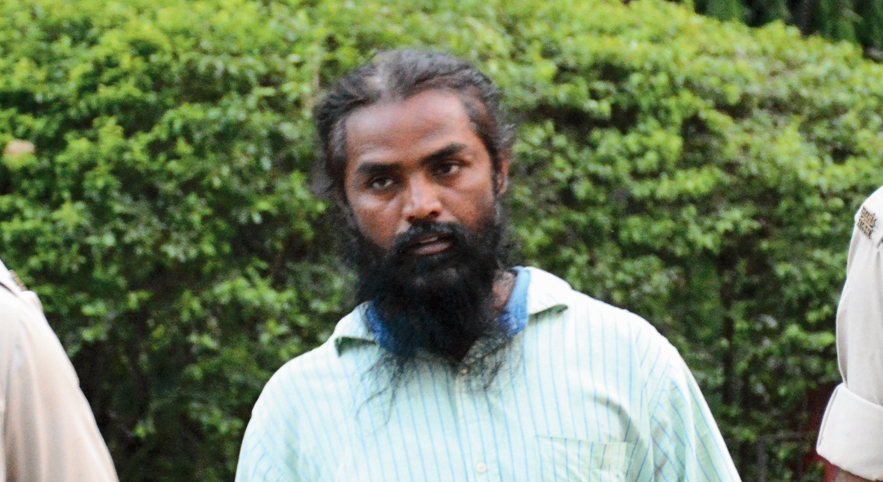 Jeetrai Hansda outside the civil courts at Sitaramdera in Jamshedpur on Sunday.
Picture by Bhola Prasad
Our Correspondent   |   Jamshedpur   |   Published 26.05.19, 10:12 PM

A tribal theatre activist has been arrested in BJP-ruled Jharkhand almost two years after he posted a comment asserting his community’s right to eat beef.

The timing of the arrest —two days after the declaration of the election results — has prompted questions whether the BJP-run administration in the state delayed the action to avoid an Adivasi backlash at the hustings.

Jeetrai Hansda, 42, who teaches theatre as a guest lecturer at a Jamshedpur college, said he stood by the point he had made in his June 2017 Facebook post although he accepted it could have been put in a less offensive way.

“I stand by my statement. (Beef-eating) is considered objectionable for society but is part and parcel of our tribal culture. But certain things I had posted were wrong; I should not have put it like that,” Hansda told The Telegraph before being taken to Ghaghidih Central Jail on Sunday.

Hansda had posted: “Dear comrades, can anyone tell me where I can buy beef in Jamshedpur? I want to organise a beef party.”

He had added: “Eating beef was part of Adivasi culture. If Santhals are Indians, there should be no law that forces us to accept Hindu customs and rituals. I reject it.”

Eating or selling beef is illegal in Jharkhand.

Activists of RSS student wing ABVP had lodged a complaint with Sakchi police and demanded Hansda’s removal from the Graduate School College for Women, affiliated to Kolhan University in Sakchi, where he was then a guest lecturer.

Coincidentally, Hansda’s 11-month contract expired around the same time and he left the college.

Six months later, the university allowed him to join the Jamshedpur Cooperative College as a guest lecturer after he apparently promised not to post any more controversial comments.

The police initially lodged a general diary against Hansda, converting it to an FIR after an “investigation”.

Asked why Hansda had been arrested only now, Sakchi OC Rajiv Kumar said the activist had been “absconding”, having fled each of five police raids on his home “through the backdoor”.

Kumar said the police had been trying to arrest Hansda for the past four months since Jharkhand High Court asked the force to round up all those against whom arrest warrants were pending. “We raided Hansda’s home at Karandi in Parsudih five times in the past four months, but every time he escaped through the backdoor,” he told The Telegraph. “Last night we received a tip-off that he was at Pappu Hotel, an eatery on Kalimati Road in Sakchi. We raided the place and arrested him.”

Hansda has been booked under penal code sections 153A (promoting enmity between groups), 295A (outraging religious feelings) and 505 (public mischief and incitement), entailing a maximum punishment of five years in jail. A court sent him to judicial custody on Sunday evening.

“Guest faculty are only reappointed if the college sends a proposal. However, since Hansda had a good academic profile and admitted he had behaved against the university’s code of conduct and would not repeat it, the university gave him a second chance,” he said.

“So far, we know nothing about his arrest. Once we receive any information officially, the university will follow its guidelines.”

Local tribal author Rabindranath Murmu said people were free to eat whatever they wanted “but I personally feel there are better platforms to raise such issues, and it’s better to be somewhat responsible on social media”.

Two more men were arrested in Seoni district of Madhya Pradesh on Sunday in connection with Wednesday’s alleged attack by five cow vigilantes on three people, whom they had accused of transporting beef, PTI reported.

The five suspects and the three victims had already been arrested — for assault and illegal beef transport, respectively. The number of arrests has risen to 10 with the apprehension of brothers Rasheed Hakim, 24, and Sammi Hakim, 20, for allegedly selling meat to the three assault victims.

A video had shown five attackers beating two men with sticks and forcing one of them to thrash their woman companion with slippers.