The mask has fallen from the Shah-Modi brand of politics, says social activist Swami Agnivesh 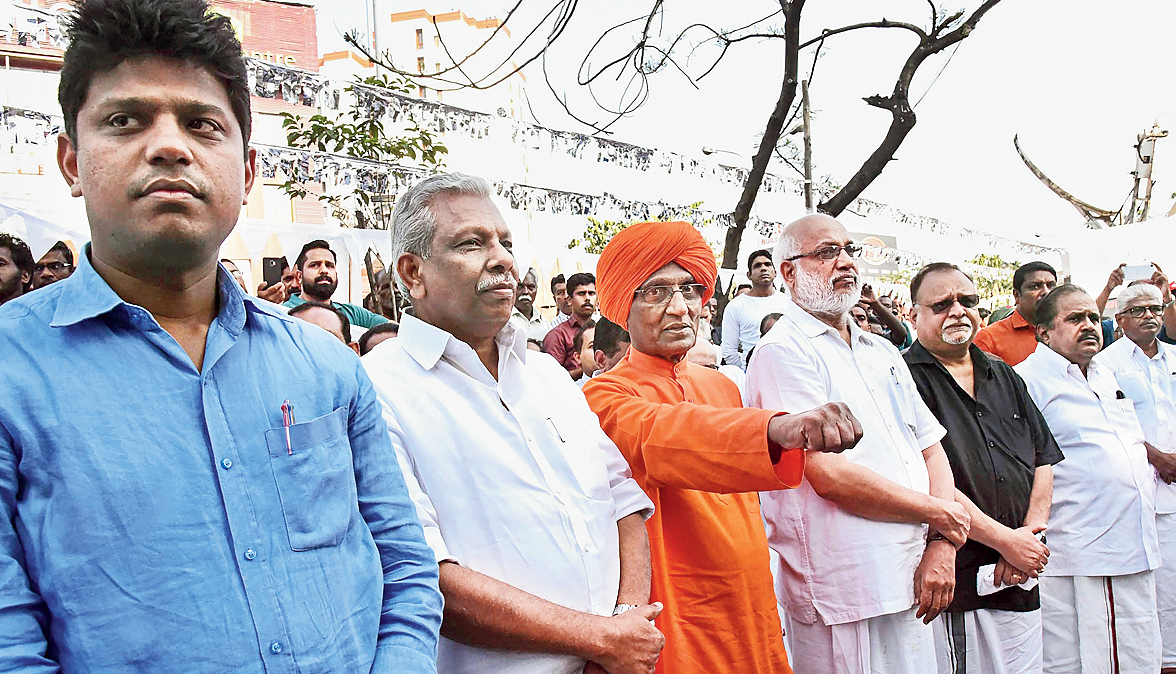 Social activist Swami Agnivesh on Friday tore into the BJP-Sangh parivar for the unprecedented violence in Kerala over women’s entry into the Sabarimala temple, alleging “political banditry” and a “surgical strike” on the state and claiming that “the mask has fallen from the Shah-Modi brand of politics”.

Agnivesh urged everyone to stand together in condemning the violence aimed at communally polarising Kerala.

“An unspeakable outrage has been perpetrated on the peace-loving, self-respecting people of Kerala, known for their exemplary record of communal harmony and social amity. What is nationally significant is that the mask has fallen from the Shah-Modi brand of politics,” he said in a media release.

Agnivesh noted how journalists had been targeted and assaulted during the statewide protests led by the Sangh parivar over the past two days.

“Women were attacked, as a matter of priority. For an entire day the state stood stunned under malevolent terror,” he said.

“Stung by the historic show of solidarity by the women of Kerala and their resolve to be treated no more as untouchables by agents of religious obscurantism, the RSS and the BJP in Kerala have gone berserk and mounted a surgical strike on the state,” Agnivesh said, referring to the “Women’s Wall” formed by more than 50 lakh women in Kerala on January 1.

“On the 2nd of January the people of Kerala found themselves besieged. Life was paralysed. Streets convulsed with violence. The very face of Kerala was set on fire. Public assets burned,” he wrote on the statewide violence and arson perpetrated by Sangh parivar activists enforcing a shutdown to protest the entry of two women of childbearing age into the Sabarimala hill shrine.

The women, Bindu and Kanakadurga, had managed to enter the temple with the help of police personnel who accompanied them in civvies. While they faced no issues at the temple, although many devotees appeared to have identified them from an earlier failed attempt, the Sangh parivar launched a violent protest later that day and declared a shutdown on Wednesday.

“Its dance of fury has been showcased in Kerala. The essence of the Hindutva vision for India is now chillingly clear,” Agnivesh said in reference to the protests.

“There is no political party, in India or anywhere in the world, that exalts the untouchability of women to religious heights as the BJP does in Kerala. To add insult to injury, it deploys women at the forefront of defending this insult to women,” he said, citing how the Sangh parivar uses women in their agitations.

He stated that the Sangh parivar “has declared war not only on the civic life of Kerala but also on the will and democratic rights of the people”.

Agnivesh recalled how BJP president Amit Shah, in his last visit to Kerala, had urged his party to “pull down” the Left government.

“Since then the preparation for the present enacting of manufactured anarchy has been underway. The intent is to provide an alibi for the Centre to intervene on the pretext that ‘law and order has collapsed’ in Kerala,” the social activist and spiritual leader said.

“Keralites deserve to be congratulated for seeing through this political banditry. At the end of a whole day of mayhem, the BJP in the state stood completely isolated,” Agnivesh stated, adding that public resentment against the Sangh’s “perversions” could be felt everywhere. He urged all Indians to emulate the example of Kerala. “If we want to live in peace, we have to reject agents of violence and oppression.”

“If Hindus really care for their religion, they need to denounce the outrage of misusing and corrupting it for political gains. The country is in grave peril, if it is abandoned into the hands of such people,” Agnivesh observed.

“Corrupting our sense of fellow humanity is too huge a price to pay for fulfilling somebody else’s political ambition. Let us make sure that the pestilence of communal polarisation is eradicated from our midst,” he added.