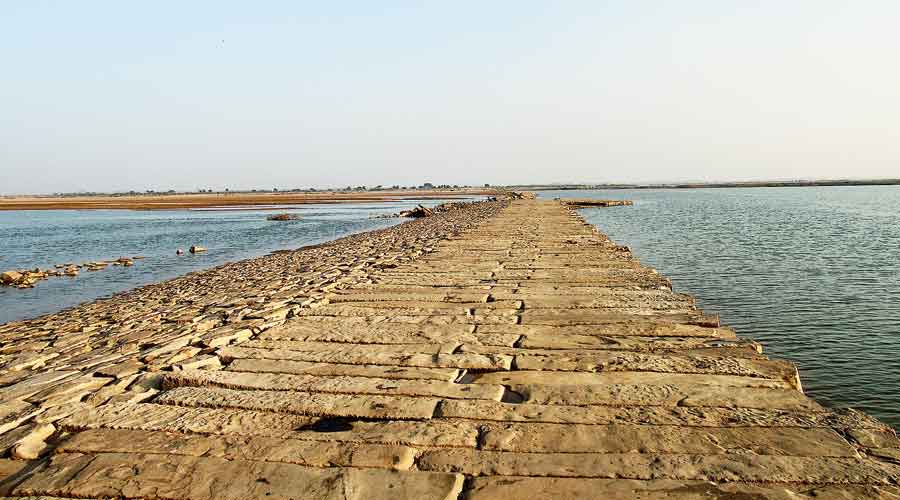 The five-century-old and 4km-long stone causeway built across the Sone river by emperor Sher Shah Suri (1486AD-1545AD) as part of the famous Grand Trunk Road was considered to be the most significant archaeological find in Bihar after Independence. It was virtually intact when Archaeological Survey of India (ASI) officials discovered it in 2016.

Today, the sand mafia is destroying it with impunity. They have wantonly damaged the causeway at many places; several portions of the structure are collapsing under the weight of huge sand-carrying vehicles and earthmovers.

The causeway, located between Dehri in Rohtas district and Barun in Aurangabad district, is also being used as a jetty to illegally mine and load sand from the river. Mounds of sand are stacked along the causeway. 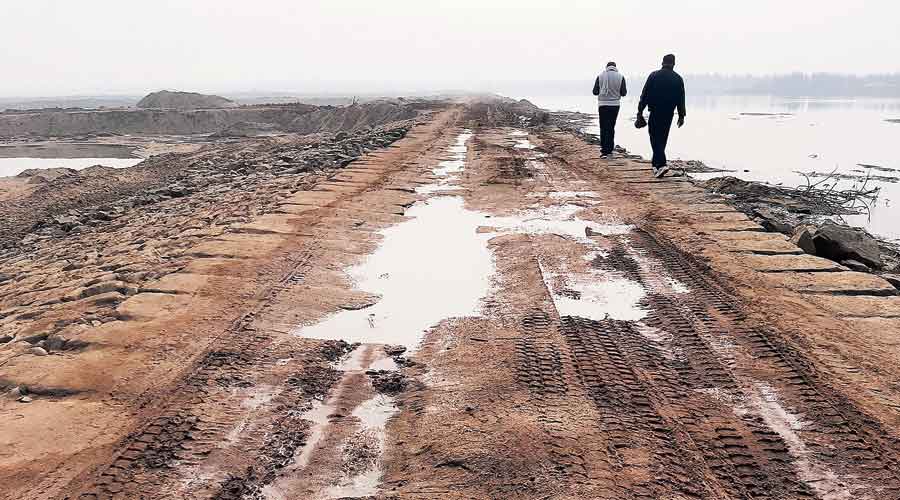 Several huge stone slabs used in the structure are missing. The locals say they are being stolen to feed the stone-crusher units illegally active in the vicinity.

Armed gangs roam around the area, dissuading common people from going anywhere near the causeway. Locals allege the nefarious trade is conducted in a nexus with the police and district administration officials.

All this is happening despite chief minister Nitish Kumar’s frequent visits to archaeological sites and his vow to protect and conserve them. The leader is yet to visit the causeway.

“The entire sand mining is illegal because ghats near any monument or bridge are not given on lease for the purpose. The sand mafia’s morale is very high and they are working unchecked. 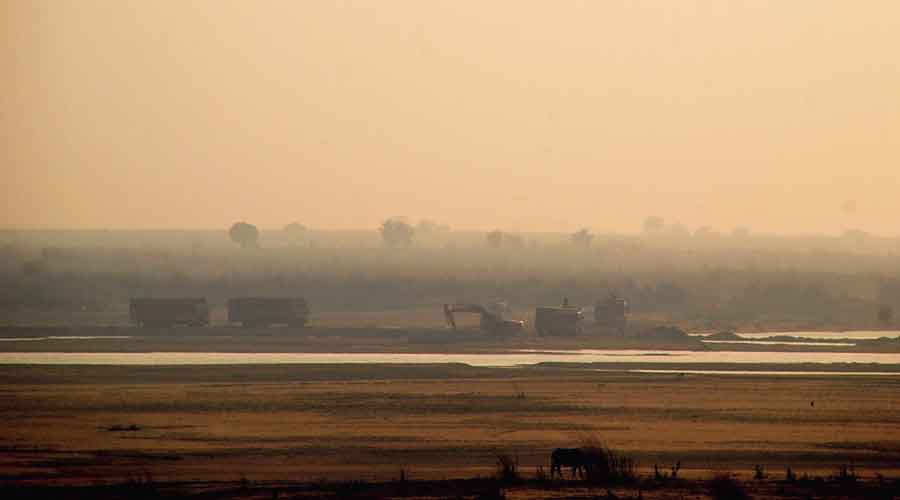 “The local administration turns a blind eye to their activities and it seems that the state government is also not serious about cracking the whip on them. Very drastic steps are needed to protect the causeway from them,” Rohtas-based history and archaeology researcher Shyam Sundar Tiwari told The Telegraph.

The 20-feet-wide causeway made from 10-feet-long dressed sandstone slabs having a height and width of one foot each runs across the entire river bed of the Sone to bridge its two banks.

The causeway was a part of the fabled Grand Trunk Road — known as the Uttarapath (the North Route) in ancient times and Sadak-e-Azam or Badshahi Sadak during the medieval era — stretching from Sonargaon and Chittagong in present-day Bangladesh to the Balkh region of Kabul in Afghanistan. The GT Road was considered to be of much military, commercial and transportation importance.

The causeway, which had got buried under sand on the riverbed, was discovered when copious amounts of water released by the Bansagar Dam in Madhya Pradesh washed away the sand in 2016.

The causeway was found by ASI deputy superintending archaeologist Shanker Sharma as part of the Uttarapath mapping project that now figures on the tentative list of the Unesco World Heritage status.

Any site, property or monument considered to be a cultural or natural heritage of outstanding universal value and therefore suitable for being designated as a World Heritage is included in the tentative list.

Asked about the ongoing destruction of the causeway, Sharma refused to comment.

Patna circle superintending archaeologist H.A. Naik, under whose jurisdiction Bihar falls, expressed ignorance about the damage being perpetrated on the causeway.

“We have not received any information or report from the state government or any other source about the destruction of Sher Shah’s causeway.

We will send a team to find this out,” Naik told this newspaper. 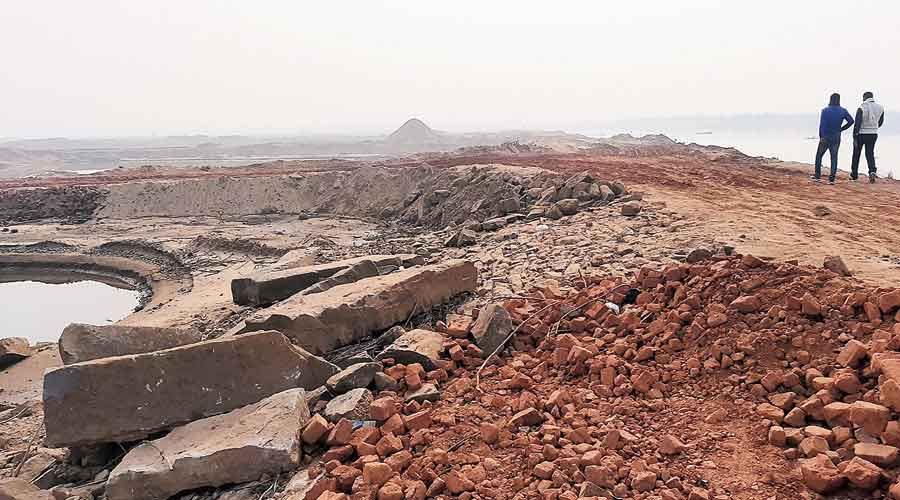 Then ASI director-general Rakesh Tewari, under whose tenure the structure was found, asserted that the onus of its protection was on the state government.

“It is not a protected monument of the state or the Centre. However, its protection is the responsibility of the state government and the local administration. The causeway is a very important structure discovered by us,” Tewari said.

Aurangabad district magistrate Saurabh Jorawal said he did not know about either Sher Shah’s causeway or illegal mining.

“I have no idea about Sher Shah’s structure or illegal sand mining activities. However, we will get it checked,” Jorawal told this correspondent.

Asked about the destruction of Sher Shah’s stone causeway due to illegal sand mining, Aurangabad police superintendent Sudhir Kumar Podika said: “This was not in my notice. I will ask my men to look into it. We conduct continuous raids against the sand mafia. Officials from the police, district administration, mining, transport, weights and measures are part of the raiding teams.”

Since bridges of such span were not constructed in the 16th century, the causeway was an engineering marvel that allowed people and animal-drawn vehicles to cross the river.

Surkhi-chuna (burnt clay and lime) mortar was used to connect the stone slabs of the structure. Stone chips were used to add strength to the mortar.

The side of the causeway facing the flow of the river water was veneered with small stones to provide protection to the structure from the swift currents.

Culverts were constructed on the causeway at regular intervals to allow the passage of water and the foundation of the entire structure is several metres deep.

It became defunct during monsoon when water flowed over the structure and ferries were used to transport people, horses, elephants and carts from one side of the riverbank to the other.