Police said a case has been registered against 200 ‘identifiable’ persons 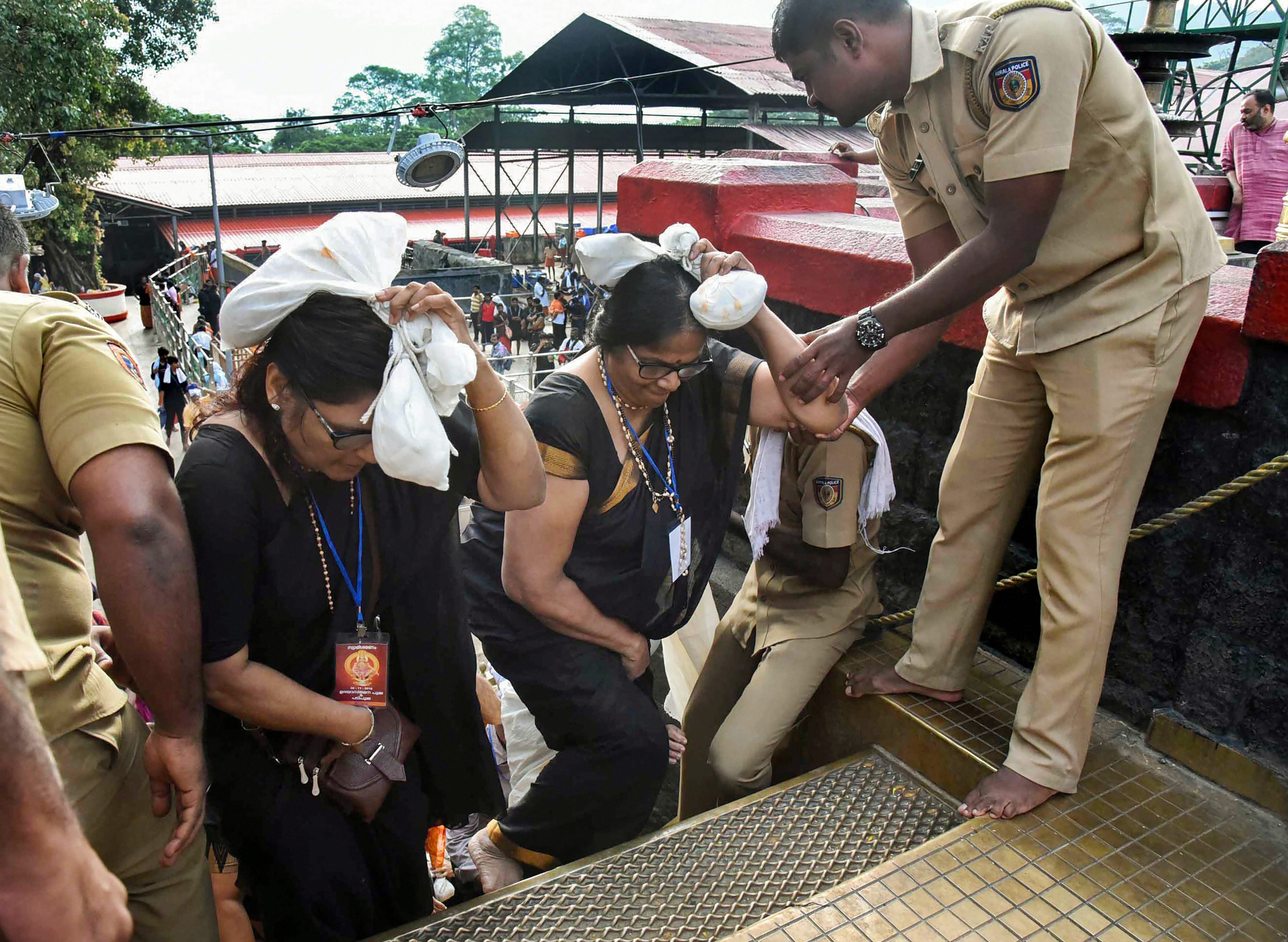 Nearly 200 frenzied devotees tried to prevent a 52-year-old woman from entering the Lord Ayyappa temple on Tuesday, prompting police to register cases against them.

Lalitha Ravi showed her Aadhaar card to prove she is not in the 10-50 age group. The Kerala Hindu Places of Public Worship (Authorisation of Entry) Rules of 1965 had banned the entry of women in that age group into the temple, which was recently overturned b the Supreme Court.

The woman was escorted into the shrine by the police later.

The hill temple witnessed an unprecedented flow of devotees when it opened for the two-day special puja on Monday evening.

Hailing from Thrissur, Lalitha came to the hill temple with 19 relatives, including women, for her grandson’s ‘chorunnu’ (rice giving ceremony).

Police said a case has been registered against 200 'identifiable' persons in connection with the incident, based on her complaint.

A cameraman of a Malayalam television channel was attacked, allegedly by devotees while taking visuals of the protest.

The Ayyappa temple opened on Monday for the second time in three weeks for a two-day special puja amid unprecedented security. Hundreds of police personnel, including armed commandos, are keeping a tight vigil at the temple and nearby areas.

Despite prohibitory orders, devotees and Right-wing activists gathered in huge numbers at Sannidhanam, the shrine complex.

When the situation went out of control, senior RSS leader Valsan Thillankeri, who has been camping at the shrine complex since Monday, pacified the angry agitators. He asked them to maintain calm and cautioned them against alleged “unruly elements”, who could intrude to create trouble at the hill shrine.

He claimed he had asked the devotees to help the police.

Valsan also courted controversy for allegedly violating the key tradition of the Sabarimala shrine by climbing the 18 sacred steps without carrying the customary ‘irumudikkettu’ (sacred offerings to Lord Ayyappa) on his head.

TV channels aired visuals of the Sangh leader standing on the golden steps, leading to the sanctum sanctorum.

However, he rejected the charges and said he did carry the offerings while climbing the holy steps.

A group of young women from Andhra Pradesh had to return from the base camp, Pamba, following protests this morning.

Another batch of women from the state, all aged above 50, were barred from entering the temple as they did not carry the ‘irumudikettu’. Police later escorted them to the shrine complex after convincing the protesting devotees.

“They are trying to prevent devotees arriving there for darshan. Real devotees and society will identify such forces,” he told reporters in Kozhikode.