Advertisement
Home / India / There will be no winning side in Russia-Ukraine conflict: India tells UNSC

There will be no winning side in Russia-Ukraine conflict: India tells UNSC 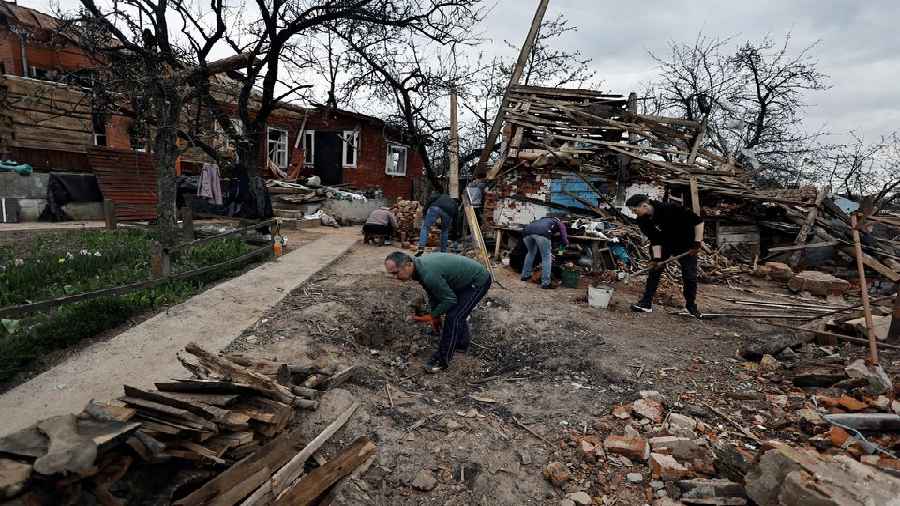 Asserting that there will be no winning side in the Russia-Ukraine conflict, India has told the UN Security Council that diplomacy will be a lasting casualty while underscoring the immediate need to evacuate innocent civilians from areas witnessing intense fighting in Ukraine.

Speaking at the UNSC briefing on Ukraine on Thursday, India's Permanent Representative to the UN Ambassador T S Tirumurti said India remains on the side of peace.

"Ever since the commencement of the conflict in Ukraine, India has been consistently calling for complete cessation of hostilities and for pursuing the path of dialogue and diplomacy as the only way out.

"However, the conflict has resulted in loss of lives and countless miseries for its peoples, particularly for women, children and (the) elderly, with millions becoming homeless and (being) forced to take shelter in neighbouring countries," he said.

"India remains on the side of peace and therefore believes that there will be no winning side in this conflict and while those impacted by this conflict will continue to suffer, diplomacy will be a lasting casualty," he said.

Tirumurti emphasised that India has strongly condemned the killing of civilians in the Ukrainian city of Bucha and supported the call for an independent investigation. New Delhi also supports all efforts to alleviate the suffering of the people of Ukraine, he said.

UN Secretary General Antonio Guterres briefed the Council on his recent visit to Russia and Ukraine during which he met President Vladimir Putin and President Volodymyr Zelenskyy on April 26 and 28, respectively.

"Throughout my travels, I did not mince words. I said the same thing in Moscow as I did in Kyiv... Namely that: Russia's invasion of Ukraine is a violation of its territorial integrity and of the Charter of the United Nations. It must end for the sake of the people of Ukraine, Russia, and the entire world," Guterres said.

The UN chief told the Council that the United Nations and the International Committee of the Red Cross are leading a humanitarian operation that is greatly complex both politically and in terms of security. The humanitarian operation began on April 29 and required enormous coordination and advocacy with Russian and Ukrainian authorities, he said.

So far, two safe passage convoys have been successfully completed. In the first, which concluded on May 3, 101 civilians were evacuated from the Azovstal plant along with 59 more from a neighbouring area.

In the second operation, completed Wednesday night, more than 320 civilians were evacuated from the city of Mariupol and surrounding areas.

Guterres said a third operation is underway but did not give further details. "It is our policy not to speak about the details of any of them before they are completed to avoid undermining possible success," he said.

"It is good to know that even in these times of hyper-communications, silent diplomacy is still possible and is sometimes the only effective way to produce results," the UN chief said.

India welcomed Guterres' visit to Russia and Ukraine and his engagement with the leadership of the two countries.

"We agree that the immediate priority is of evacuation of innocent civilians from areas witnessing intense fighting. We appreciate the efforts of the United Nations in evacuating the civilian population from Mariupol. We hope these efforts will extend to other areas as well," Tirumurti said.

He noted with concern that the conflict is having a destabilising effect with broader regional and global implications.

"Oil prices are skyrocketing and there is a shortage of food grains and fertilizers. This has had a disproportionate impact on the Global South and developing countries," he said.

World Food Programme's Chief Economist Arif Husain told a news conference Wednesday that the agency is in discussions with India for procurement of wheat as nations face food security challenges amid the Ukraine war.

He noted that these organisations encouraged governments not to put export bans which artificially increase the price and availability or reduce the availability of major staple commodities.

Tirumurti said the food security challenges emanating from the conflict require the international community to respond by going "beyond constraints that bind us presently."

UN High Commissioner for Human Rights Michelle Bachelet told the Council that her office has recorded 6,731 civilian casualties in Ukraine since the Russian armed attack started on February 24.

"We know the real figures are considerably higher," she said, adding that most of these casualties have been caused by the use of explosive weapons with wide-area effects in populated areas, such as shelling from heavy artillery, including multiple launch rocket systems, and missile and air strikes.

"Many of these allegations concern violations that may amount to war crimes," she said.

"If the perpetrators of violations against civilians and persons hors de combat are brought to justice, potential perpetrators will think twice before unleashing similar unlawful attacks or acts of violence and creating new victims," she said.