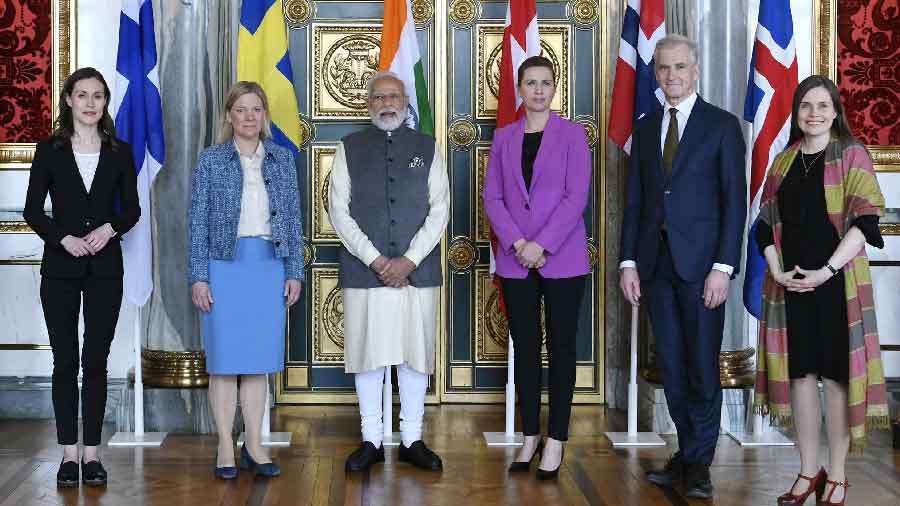 India and the Nordic countries on Wednesday discussed the destabilising effect of the conflict in Ukraine and its broader regional and global implications as they agreed to remain closely engaged on the issue.

The issue figured prominently at the second India-Nordic summit attended by Prime Minister Narendra Modi and his counterparts from Finland, Iceland, Sweden, Norway and Denmark.

A joint statement said the prime ministers expressed their serious concern about the ongoing humanitarian crisis in Ukraine.

"They unequivocally condemned civilian deaths in Ukraine. They reiterated the need for an immediate cessation of hostilities," it said.

It said the prime ministers emphasised that the contemporary global order has been built on the UN Charter, international law and respect for sovereignty and the territorial integrity of states.

"The Nordic prime ministers reiterated their strong condemnation of the unlawful and unprovoked aggression against Ukraine by Russian forces," the statement said.

It said India and the Nordic countries affirmed their support for a rules based international order and for multilateral institutions and their commitment to work towards making them more inclusive, transparent, and accountable with the aim of addressing global challenges more effectively.

"This included working towards reform of the UN including of the Security Council, to make it more effective, transparent and accountable, and the reform of the World Trade Organisation, as well as strengthening collaboration on global health issues, including pandemic preparedness and response," it said.

It said the Nordic countries reiterated their support for India's Permanent Membership of a reformed and expanded Security Council.