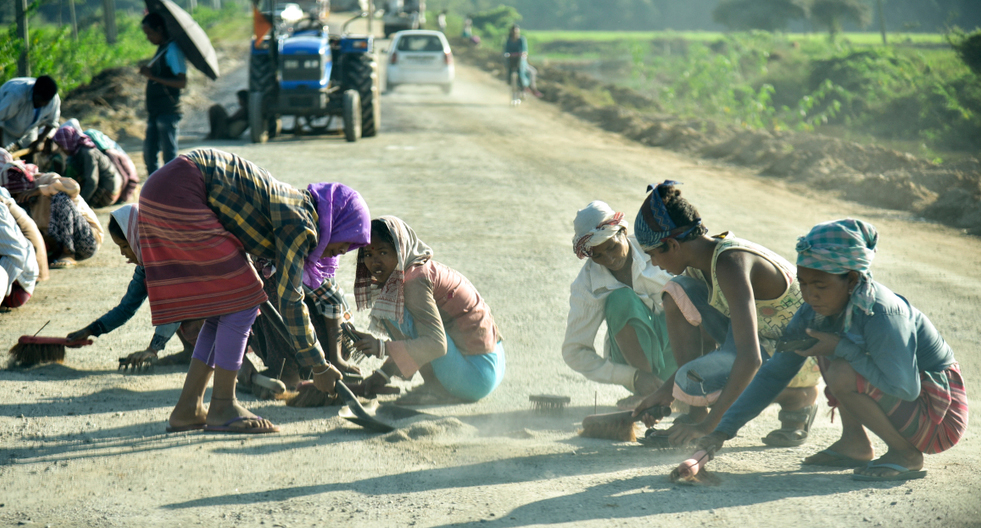 The Mahatma Gandhi National Rural Employment Guarantee Act offers up to 100 days’ paid, unskilled work annually to every rural household. The wages have to be paid within 15 days of the completion of the project, with a provision of a compensation for delayed payment.
(Shutterstock)
Basant Kumar Mohanty   |   New Delhi   |   Published 31.12.19, 01:09 AM

Millions of rural job scheme workers may have their wages delayed in the new year with the programme coffers depleting and the finance ministry sitting on the demand for additional funds.

According to data on the scheme website, the funds available as of December 30, 2019, were Rs 2,766 crore, which social activists working on the scheme’s implementation said would be exhausted in two weeks.

Government officials said the rural development ministry had written to the finance ministry about three months ago demanding an additional Rs 20,000 crore, but had received no response.

Finance minister Nirmala Sitharaman had allocated Rs 60,000 crore for the scheme in the 2019-20 budget, up from Rs 55,000 crore in the previous budget, while the government released another Rs 6,000 crore last year.

In her budget speech this year, Sitharaman had promised to allot extra funds for the programme if needed.

The Mahatma Gandhi National Rural Employment Guarantee Act offers up to 100 days’ paid, unskilled work annually to every rural household. The wages have to be paid within 15 days of the completion of the project, with a provision of a compensation for delayed payment.

“The workers will not be paid in time over the next three months unless fresh funds are released. The available funds will be exhausted any day,” said Nikhil Dey of the Mazdoor Kisan Shakti Sangathan, which campaigns for proper implementation of the act in Rajasthan.

“Ultimately, a lack of funds will depress the demand for work and discourage the poor workers.”

Dey said there should not be any limit on the scheme funds since it is a demand-driven programme.

“The (finance) minister has promised more funds; now is the time to keep her promise,” he said.

Another Sangathan member said that most of the workers under the scheme in Rajasthan had not been paid since October 2.

A finance ministry official said the matter had been discussed at a recent pre-budget meeting and that extra funds might not be released for the scheme this year.

“There may be the usual allocation in the next budget. The rural development ministry may have to manage the scheme for now,” the official said.

With the finance ministry silent, the rural development ministry is planning to divert funds from the Pradhan Mantri Gram Sadak Yojna --- a rural road connectivity programme --- to the rural job scheme. It may ask the states for loans towards the job scheme within their territories.

Like the previous year, the demand for work under the scheme has been high this year. The persondays of work generated so far this financial year (in nine months) is 186 crore, against the projected labour demand of 258 crore for the entire year. A personday refers to one day of work per worker.

Nearly nine crore families are job card holders under the scheme, and about five crore of them are active.