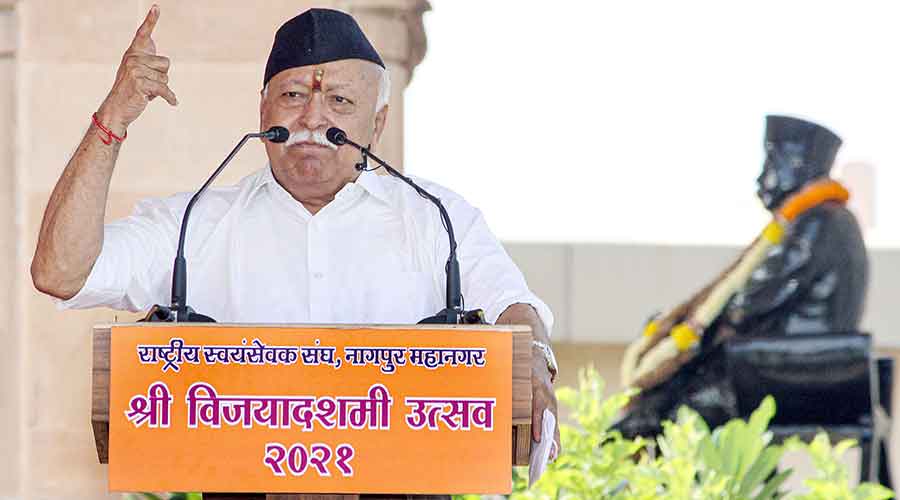 RSS chief Mohan Bhagwat on Friday expressed concern over “rising population” and “population imbalance”, asserting the need to review the population policy and highlighting the Sangh’s belief that disproportionate growths among various religious groups could threaten the “unity, integrity and cultural identity of the country”.

Bhagwat made a specific reference to Bengal, claiming that the violence after this year’s Assembly elections owed to “the appeasement of barbarous elements by the government and population imbalance”.

Speaking at the annual Dussehra celebrations at the RSS headquarters in Nagpur, Bhagwat claimed that the proponents of population control bore no “ill will” towards any community, but in the same breath talked about the “persecution of native Hindus” in areas of “imbalanced population growth” and pointed to the threat posed by the rise of the Taliban in Afghanistan.

“Isme kisi ke prati duravav nahi rakhta (There is no ill will towards anybody in this),” he added.

Bhagwat went on to read out a resolution passed by the RSS’s top decision-making body in 2015 that laid down the crux of what the outfit, the ideological parent of the ruling BJP, was aiming at.

“Steps taken to control population of the country have yielded adequate results during the last decade. But in this regard... severe demographic changes brought forth by analysis of the religious data of Census 2011 highlight the necessity (to) review… the population policy,” the resolution said.

It added: “Vast differences in growth rates of different religious groups, infiltration and conversion resulting in religious imbalance of the population ratio, especially in border areas, may emerge as a threat to the unity, integrity and cultural identity of the country.”

Bhagwat also sought to make a distinction between people belonging to religions of “Bharatiya origin” and Muslims.

Pointing to data that indicated that the total fertility rate and child ratio were uneven across religions, the written version of his speech put out by the RSS said: “This is reflected in the fact that the share of the population of religions of Bharatiya origin which was 88 per cent has come down to 83.8 per cent, while the Muslim population, which was 9.8 per cent, has increased to 14.23 per cent during the period 1951-2011,” he said.

The RSS and sections of BJP leaders have intermittently raised the bogey of a growing Muslim population. The minority community has felt increasingly cornered under the current dispensation because of policies such as the new citizenship matrix, the revocation of Jammu and Kashmir’s special status and the frequent attacks and slander campaigns targeting Muslims.

Some felt that Bhagwat’s move to flag the population issue in his annual speech indicated it could be the next policy push of the Narendra Modi regime.

BJP insiders indicated that discussions were underway to prepare a new population policy in the run-up to the next general election in 2024 to sway the majority Hindu community.

In the English version of the written speech released by the RSS, Bhagwat pointed to the post-poll violence in Bengal and attributed it to “population imbalance” in the state while pitching for a change in population policy.

“The violence that broke out following the elections of West Bengal and the pitiable condition of the Hindu people there can be attributed to the appeasement of barbarous elements by the government and population imbalance,” the English version of Bhagwat’s speech read.

“Therefore a policy that is applicable to all groups in the same fashion is imperative,” he added.

Bhagwat said a new population policy should be framed keeping in mind the next 50 years. According to him, India is a country of youths but in the next 30 years they will age and this has to be borne in mind while figuring out how much working population is needed to feed them.

“A population policy keeping in mind the next 50 years should be formulated and it should be implemented uniformly for everyone,” he said.

Bhagwat expressed anxiety over the content being streamed on OTT platforms and called upon the government to put in place a regulatory framework.

“There’s no control over what is shown on OTT platforms. Post-Covid, children have access to phones and we don’t know what they are watching,” the RSS chief said.

Bhagwat also flagged concern over more and more youths getting addicted to narcotics and alleged that money from drug smuggling was being used for anti-national activities, calling upon the government to clamp down on it.

He also said he was worried about the use of bitcoins and urged the government to make efforts to regulate the online currency, expressing fear that it could harm the country’s economy.