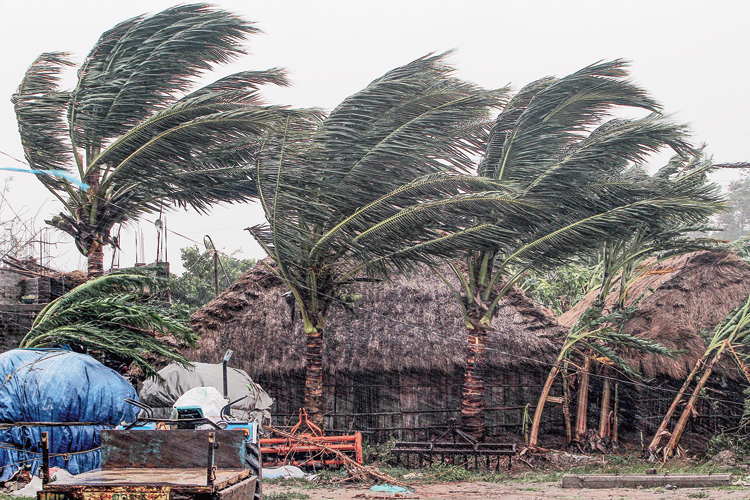 Prime Minister Narendra Modi on Friday announced an advance interim assistance of Rs 500 crore for Odisha, which was hit by Cyclone Amphan on Wednesday.

He made the announcement at the airport after conducting an aerial survey to assess the loss and destruction caused by the cyclone in Odisha with the state administration.

Modi reached Bhubaneswar in the afternoon after conducting an aerial survey of the cyclone-ravaged Bengal. Modi was accompanied by governor Prof Ganeshi Lal, chief minister Naveen Patnaik, Union ministers Dharmendra Pradhan and Pratap Sarangi during his aerial survey of the affected areas of Jagatsingpur, Kendrapara, Bhadrak and Balasore.

Modi praised Naveen saying that he and his team have done a good job in preparedness for the cyclone when it is fighting with the coronavirus. 'At this point, the super cyclone was a matter of concern. On its way to Bengal, it was a matter of concern how the cyclone would hit and affect Odisha. The people even upto the village levels are fully aware of what to do during this time of crisis. Because of this, here, there has been a great success in savings the lives. I would like to thank the people of Odisha, the administration of Odisha, chief minister Naveen Patnaik and his full team for their efforts in tackling the cyclone as the state has been able to limit the casualties. Naveen babu and his team abhinandan ka patra hain,' Modi said before leaving for Delhi.

The Prime Minister said compared to the destruction caused by Cyclone Amphan in Bengal, the devastation in Odisha is less. 'But on its way, it had its impact. The state government made a detailed presentation that incurred losses in power, agriculture, horticulture and other sectors. Once the state government submits its report, the central team would come assess the damages,' Modi said.

The Prime Minister assured the Naveen government that the Centre would help Odisha during this time and help it to come out of the crisis.

Cyclone Amphan on Wednesday lashed Odisha, triggering heavy rainfall accompanied by wind touching the speed of 110kmph in |many places of four districts of Jagatsingpur, Kendrapara, Bhadrak and Balasore. Though the state did not witness the destruction that had witnessed during Fani last year, Cyclone Amphan left a trail of devastation that included damaged houses, uprooted tree and electricity poles in few pockets of Kendrapara, Jagatsingpur, Bhadrak and Balasore, before leaving for Bengal.

Though the Odisha government is yet to admit a single casualty, Cyclone Amphan barrelled through coastal Odisha on Wednesday afternoon, causing destruction particularly to crops and agriculture fields. Several thatched houses were blown away. As per the preliminary estimate, nearly 44.56 lakh people have been affected by the cyclone.

Naveen on Friday morning talked to Bengal chief minister Mamata Banerjee and enquired about the intensity of the damage caused by the Amphan. Expressing his absolute solidarity with the people of Bengal at this hour of crisis, Naveen assured all possible support in terms of men and materials to overcome this critical situation.