Modi, along with Mamata and Dhankhar, survey storm-hit areas by copter 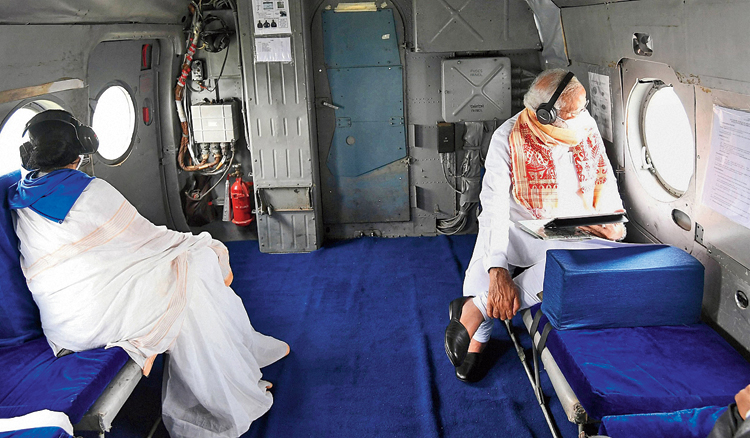 Prime Minister Narendra Modi on Friday announced an 'advance assistance' of Rs 1,000 crore to Bengal after an aerial survey of cyclone-ravaged areas, with Mamata Banerjee signalling the state wanted more.

The chief minister put the damage at about Rs 1 lakh crore from Cyclone Amphan, which has killed 86 people in the state and mauled large parts of North and South 24-Parganas, East Midnapore and Calcutta.

'The Centre will grant Rs 1,000 crore as an immediate advance assistance so that the state does not suffer any hardship while fighting the crisis,' Modi said after a 50-minute survey from an air force helicopter, accompanied by Mamata and governor Jagdeep Dhankhar.

After the survey, the chopper had landed on the Basirhat College grounds around noon. An hour's review meeting followed at the office of the Basirhat sub-divisional officer, with food and supplies minister Jyotipriya Mullick in attendance along with chief secretary Rajiva Sinha and other state bureaucrats.

'All aspects relating to rehabilitation, reconstruction will be addressed. We all want West Bengal to move ahead,' Modi, making his first trip outside Delhi in three months, said.

'The Centre will stand with West Bengal in these testing times. We will work together to ensure Bengal stands on its feet again.'

Modi said a central team would visit the state to assess the damage.

While the state BJP lauded Modi's 'kind gesture' towards Bengal, Mamata put on record, though without her usual belligerence, that she was not very clear about the Prime Minister's announcement.

'The package is not clear enough.... The PM told me he would inform (us) about his decision later. He indicated this may be an advance. I'm waiting for the details,' she said.

Having thrown all its resources into the fight against the Covid-19 outbreak, the Bengal government has been struggling to arrange the money for cyclone relief, rehabilitation and restoration.

Mamata signalled she was banking on Delhi for financial aid. 'I told the Prime Minister, 'We will give you details (of the damage)'. We are trying to assess the details. The value of the damage is at least Rs 1 lakh crore,' she said.

She said she had 'requested' Modi for 'some money' because the state was yet to receive a sum of Rs 53,000 crore due to it in the shape of devolved central taxes, food grain subsidies and social scheme funds.

'I told him, 'At least you try to give some money to us so that during this hour of crisis we can work',' the chief minister said.

She said the aerial survey had made it clear that the situation was 'very serious'.

'Embankments have been destroyed completely, electricity poles have been uprooted, agricultural fields are flooded, school and college buildings are damaged,' she said.

State government sources said the administration was working on a detailed analysis of the damage so a report could be sent to Delhi before the arrival of the central team promised by Modi.

A senior official said the state was banking on the Prime Minister's repeated pledge to work jointly with the Bengal government.

Later in the day, the Prime Minister's Office lauded the Bengal government in a tweet.

'West Bengal is fighting well,' it said, while reiterating Modi's commitment to stand with Bengal in 'testing times'.

'The Centre tried its best in advance and will do the same in the coming days,' Modi had earlier said, referring to the battle against the virus and the challenge of post-cyclone reconstruction.

He also said the Centre would give Rs 2 lakh to the next of kin of each person killed in the cyclone, and Rs 50,000 to each injured.