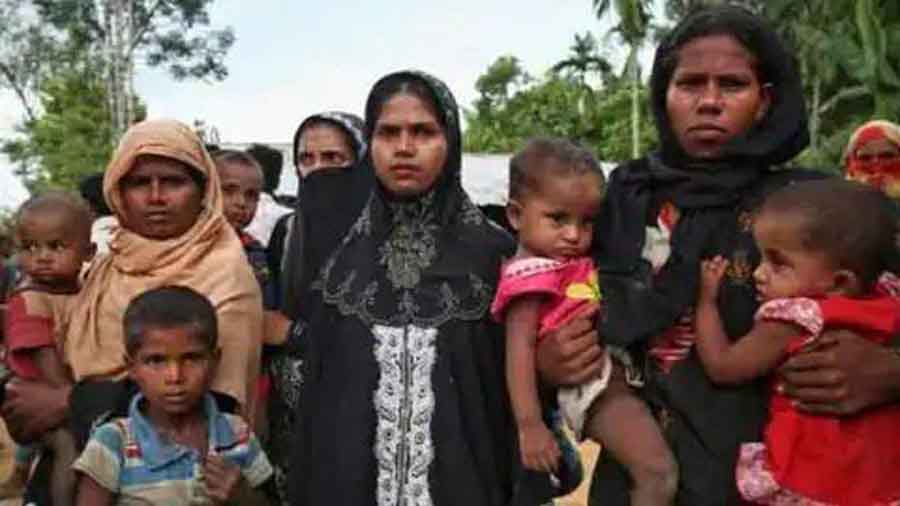 Union minister Hardeep Singh Puri on Wednesday announced a “landmark” decision to resettle Rohingyas in Delhi, only for the Centre to deny any such plan following stinging criticism from the Vishwa Hindu Parishad that condemned the largely Muslim refugees as “infiltrators”.

While the Union home ministry’s “clarification” was silent on Puri’s announcement, a home ministry official said the Union housing and urban affairs minister had been right about the rehab plan and that the VHP had forced a rollback.

The chronology — a term made famous by Union home minister Amit Shah in the context of the new citizenship matrix, which also has a bearing on refugee policy — was revealing.

It was 7.32am when Puri tweeted the decision to shift nearly 1,100 Rohingyas to economically weaker sections (EWS) flats equipped with basic facilities and round-the-clock security in Delhi. He said this should silence those who malign “India’s refugee policy deliberately linking it to #CAA”.

At 1.10pm, the VHP tweeted a statement saying the Rohingyas were not refugees but “infiltrators” and instead of providing them with housing, the government should “make arrangements to send them back and out of India”.

At 1.45pm, Kapil Mishra, a Delhi BJP leader known for making incendiary speeches, said: “There is no move to rehabilitate Rohingyas as is being talked about. There will be an official clarification soon.”

That “clarification” came at 2.50pm, with the Union home ministry denying “news reports in certain sections of the media regarding Rohingya” and making no mention of Puri’s tweet.

“With respect to news reports in certain sections of the media regarding Rohingya illegal foreigners, it is clarified that Ministry of Home Affairs (MHA) has not given any directions to provide EWS flats to Rohingya illegal migrants at Bakkarwala in New Delhi,” the ministry said.

“Government of Delhi proposed to shift the Rohingyas to a new location. MHA has directed the Government of Delhi to ensure that the Rohingya illegal foreigners will continue at the present location at Kanchan Kunj, Madanpur Khadar, as MHA has already taken up the matter of deportation of illegal foreigners with the concerned country through the Ministry of External Affairs.”

The Rohingyas live in tents at Kanchan Kunj and Madanpur Khadar. The Union home ministry added: “Illegal foreigners are to be kept in the Detention Centre till their deportation as per law. The Government of Delhi has not declared the present location as a Detention Centre. They have been directed to do the same immediately.”

The home ministry official who spoke to this newspaper said: “This time the Right-wing ecosystem and the troll army had turned on the ruling dispensation and its minister for announcing such a move. As part of a damage-control measure, the ministry had to retreat and issue a statement.”

Puri had tweeted, tagging the PMO, Shah and Delhi police: “India has always welcomed those who have sought refuge in the country. In a landmark decision all #Rohingya #Refugees will be shifted to EWS flats in Bakkarwala area of Delhi. They will be provided basic amenities, UNHCR IDs & round-the-clock Delhi police protection.

“Those who made a career out of spreading canards on India’s refugee policy deliberately linking it to #CAA will be disappointed. India respects & follows @UN Refugee Convention 1951 & provides refuge to all, regardless of their race, religion or creed.”

The CAA (Citizenship Amendment Act) speeds up Indian citizenship for persecuted non-Muslim minorities from neighbouring countries. Together with the National Register of Citizens that aimed to weed out resident illegals — and which was to follow the CAA’s implementation in a “chronology” emphasised by Shah — it raised apprehensions among many about a move to disenfranchise and denaturalise Muslims.

At 7.13pm, Puri posted another tweet saying: “Home Ministry’s press release with respect to the issue of Rohingya illegal foreigners gives out the correct position.”

The VHP statement issued by the organisation’s chief, Alok Kumar, said: “We are shocked to see a statement of the Union Minister for Urban Development Hardeep Puri, terming the Rohingyas as refugees and allotting to them the EWS flats in Bakkarwala, Delhi.

“We might remind him that the statement made by Union Home Minister Amit Shah in Parliament on 10.12.2020 declaring that Rohingyas will never be accepted in India (Rohingya ko kabhi bhi sweekar nahi kiya jaega).”

Kumar added: “Rohingyas are not refugees but infiltrators had been the consistent stand of the Union of India including in its affidavit filed in the Hon’ble Supreme Court. The fact that the Hindu refugees from Pakistan continue to live in abysmal sub-human conditions in Majnu-ka-Tila area of Delhi makes the bounty proposed to be conferred on the Rohingyas all the more deplorable.

“Instead of providing the Rohingyas with housing, make arrangements to send them back and out of India.”

Government sources said the decision to resettle the Rohingya refugees in the EWS flats had been taken at a high-level meeting in the last week of July. The meeting was chaired by the Delhi chief secretary and was attended by several senior officials from the Union home ministry, Delhi government and Delhi police, they added.

At the meeting, the Delhi police had been instructed to provide security to the premises where the EWS flats are located. The Delhi government’s social welfare department was asked to ensure basic facilities such as fans, three meals a day, landlines, television connections and recreational facilities, the sources said.

Rohingya refugees have been living in Madanpur Khadar and Kalindi Kunj in Delhi for several years. After their dwellings were burnt down twice — in 2018 and 2021 — the Delhi government provided them with tents.

In an affidavit filed in the Supreme Court in September 2017, the Union home ministry had described the Rohingya refugees living in India as “illegal immigrants”.

The government had said it had intelligence linking some Rohingyas with Pakistan-based terror groups and other international terror organisations. It argued that such links made the Rohingyas a “serious threat to national security”.

Home ministry sources could not explain the reason for the government’s sudden change of heart on the Rohingyas — as reflected in the late July decision to rehabilitate them — before the latest capitulation to the VHP.

“This could be because of international pressure,” a ministry official suggested.

The EWS flats, which belong to the civic authorities, had been built for the urban poor but were converted into Covid quarantine camps.