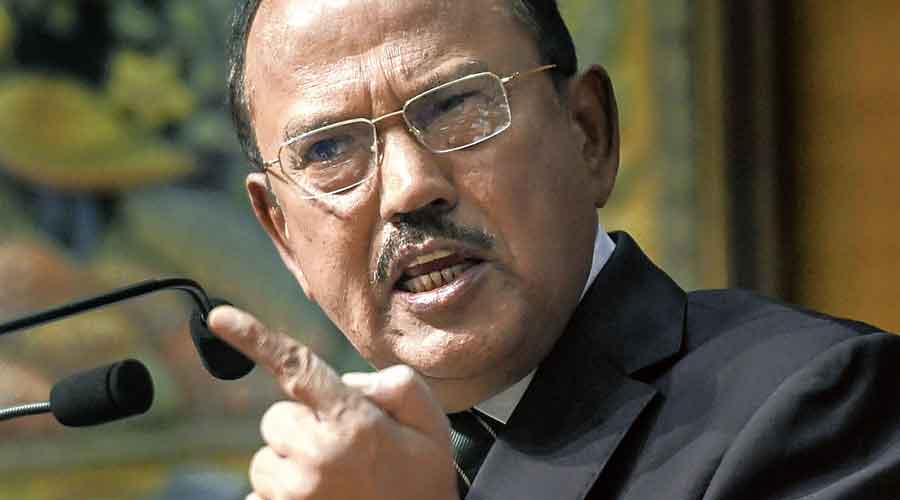 Veteran security officials and rights defenders have chided national security adviser Ajit Doval for saying civil society is the “new frontier of war”, arguing this amounts to a warning to dissenters and reflects the Narendra Modi government’s tendency to consider all criticism as enemy action.

“The new frontier of war, what you call the fourth-generation warfare, is civil society... that can be… manipulated to hurt the interest of a nation,” Doval said at an IPS passing-out parade at the National Police Academy, Hyderabad, on Friday.

He said conventional wars had “ceased to become an effective instrument to achieve political or military objectives” since they are “too expensive, unaffordable and there is uncertainty about their outcome”.

“It’s civil society that can be subverted, suborned, divided and manipulated to hurt the interest of a nation. You are there to see this land is fully protected,” Doval said.

“He is, in effect, asking trainee IPS officers to act against civil society groups and crush dissent. (Doval) seems to have forgotten that India is still a democracy and not a police state,” he told The Telegraph.

Civil rights activist Shabnam Hashmi said: “I strongly condemn Ajit Doval’s statement. It’s a shame that those in power are leaving no stone unturned to destroy this nation. I demand he withdraw his statement and apologise.”

A retired CRPF deputy inspector-general said Doval’s statement was alarming. “He wants to send a message across the police and law-enforcing agencies that dissenters and civil rights groups should be treated as internal enemies of the state,” he said.

“Doval is echoing the Modi government’s line. We need to see his remarks in the context of the government’s authoritarian bent.”

Doval, an alumnus of the National Police Academy, said: “The quintessence of democracy does not lie in the ballot box. It lies in the laws which are made by the people who are elected through those ballot boxes.”

He told the new IPS graduates: “You are the ones who are the enforcers of the law….”

The success of democracy lies in law enforcement, and people cannot feel safe if the law enforcers are weak, corrupt or partisan, he said.

An IPS officer attached to the Union home ministry declined to comment on Doval’s remarks but aired a view of democracy contrary to his, saying: “It is disagreement that alone marks the health of a democracy.”

A former security official who had served in the Union home ministry said Doval’s statement sounded “a warning” to those who disagree with government policies.

A Delhi University professor and civil rights activist said the current government was making it clear it saw any form of dissent as criminal.

A retired IPS officer  cited how the government was “handing out enemy-like treatment” to the farmers protesting against the new farm laws.

In a sign of the times, all the half-dozen rights activists and retired officials who spoke to this newspaper declined to be identified, except for Hashmi.