Revival of abandoned World War-II airstrip in Odisha on track

The facility to be used for both defence and commercial purposes: Minister 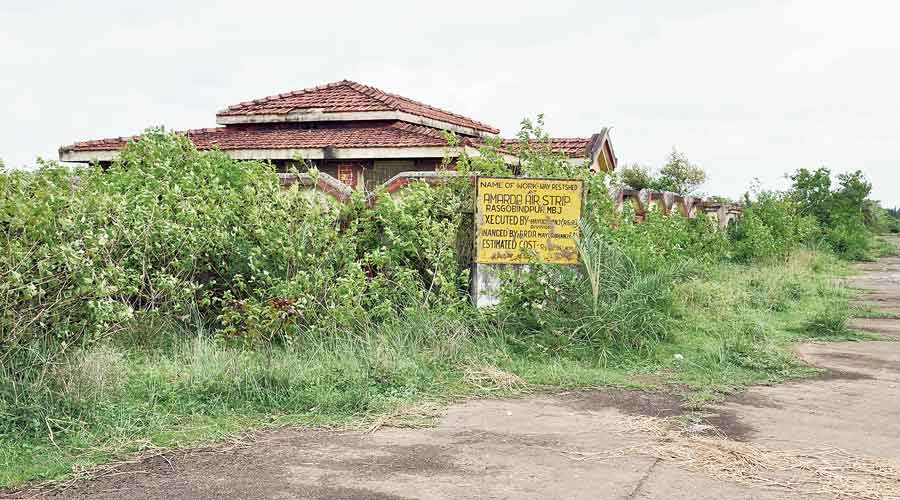 Speaking to The Telegraph, Tudu said: “I had a meeting with Air Vice-Marshal Ranade in New Delhi on developing the airstrip as a full-fledged airport on Friday. I have already discussed this issue with defence minister Rajnath Singh. Following Rajnthji’s assurance, I had met the officials of the Defence Research and Development Organisation (DRDO) and other senior officials of different wings of the Air Force. A DRDO team has already visited the site. Another team from the Indian Air Force is coming in March to assess the site. Work will start soon.”

Tudu said the airport would be used both for defence and commercial purposes.

A fighter plane takes off in the 1940s from the airstrip, which was constructed as a forward airfield against the Japanese conquest of Burma.
The Telegraph

“The airport is closer to the DRDO’s Chandipur base at Balasore, which is hardly 30km from there. Besides, it is close to other missile launching sites. The scientists can fly to this place directly.

“The airport is also nearer to Calcutta and will be commercially viable. It can be developed as a backup to the Kalaikunda Air Force Station in Bengal. It can be used for defence purposes keeping in mind the rise in tension with some of our neighbouring countries. It will boost the economy of a backward district such as Mayurbhanj.”

Group Captain Bikash Kanungo told The Telegraph that Kalaikunda was one of the strategically important Air Force stations, located around 140km from Amarda airstrip in Mayurbhanj. “There is no airbase south of Kalaikunda. If the Amarda air base is developed, it will be helpful in recovering any fighter plane in case of an emergency. Strategically, it will be best suited as a diversionary airbase and will help to strengthen India’s air power.”

The runway of the airstrip.
The Telegraph

Historian Anil Dhir, who has done a lot of historical research on the Amarda airfield, said the airport would serve the interests of the nation to a great extent. “It has one of the longest runways with around 900 acres of land. The airport has also the infrastructure for setting up aircraft maintenance, repair and overhaul (MRO) facilities. Being close to the Bay of Bengal, trails and testing of aircraft will also be safer and easier.”

According to the historian, the Amarda airstrip had a short but illustrious history, which has never been made public. “It was made during the Second World War (1939-45) as a forward airfield against the Japanese conquest of Burma. The large strip was used as a landing ground for planes and a training space for special bombing missions.

Its runway, which is over 3.5km, is the longest runway in Asia. The total runways, taxiways and aprons together constitute more than 60km. It was abandoned after the war.”

He said very few people knew that the Odisha skies had seen the crash of two giant aircraft, which had collided against each other and resulted in the deaths of 14 airmen.

Airforce officials pose for a photograph in the 1940s.
The Telegraph

“On July 26, 1945, two British Royal Air Force B-24 Liberator four-engine bombers had collided at a low altitude near the secret Amarda airfield. Fourteen airmen — the crew of the two aircraft — died in the crash. The airmen belonged to Britain, Netherlands, Canada, the US, Australia and New Zealand. One of them was an Indian. We now demand that a memorial be set up there. Whatever I have collected over the years, I would donate to the memorial,” Dhir said.

Citing India as one of the fastest-growing aviation markets in the world, he said the site could be developed as a hub for aircraft maintenance, repair and overhaul.

Quoting the Economic Survey report for 2019-20, Dhir said: “The annual import of MRO services by Indian carriers is around Rs 10,000 crore. With airlines’ fleet growing annually by 100, the size of domestic airline MRO is set to grow annually to Rs 21,600 crore in the next five years and to Rs 36,000 crore once the fleet size reaches 2,000 aircraft. If we develop the Amarda as MRO, India can also benefit a lot.”