Revealed: What ails health in Bihar

Bihar has the highest dependence on private health-care services among Indian states, the lowest government spending on health and an estimated 22 lakh households face "catastrophic" health expenditure, a new analysis of central government data has suggested. 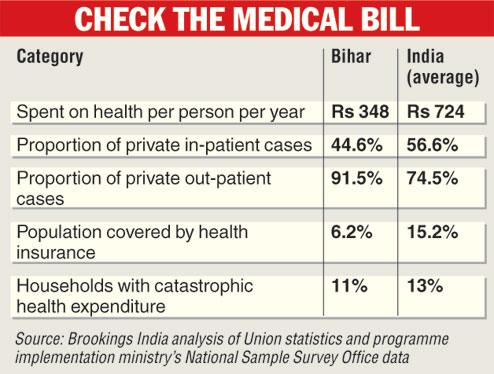 The analysis, based on the Union statistics and programme implementation ministry's National Sample Survey Office (NSSO) data, says Bihar spends Rs 348 per person per year on health, less than half India's average of Rs 724 per person per year.

In this backdrop, 91 per cent of outpatient health services in Bihar are sought through the private sector, according to the analysis just released by Brookings India, the New Delhi-based arm of the US think tank. Bihar's dependence on private health care is higher than India's average of 74 per cent, but closer to Bengal's 84 per cent and Uttar Pradesh's 87 per cent. And only 6 per cent of Bihar's population is covered by health insurance compared with India's 15 per cent. The Brookings paper also estimates that 11 per cent or about 22 lakh of Bihar's 2 crore households have faced "catastrophic" health expenditure, levels that threaten to push them towards impoverishment.

Calls to health minister Tej Pratap Yadav went unanswered, but Anil Kumar, the department's deputy secretary, told The Telegraph: "I have not come across any such data compilation, I am unaware of this data."

Principal secretary R.K. Mahajan refused to comment as he was out of station.

A senior health department official, requesting anonymity, said under the Centre's policy to grant more autonomy to the states on spending tax revenues some states are likely to invest more in health than others..

The medical community blames the state for poor investments in health care.

"Bihar has not enhanced its budgetary allocation for the health sector even though it was required to enhance the budget by 10 per cent every year since the National Rural Health Mission (NHRM) was launched in 2005," said Ajay Kumar, senior vice-president of the Indian Medical Association's Bihar chapter.

The analysis has found that private doctors are the most important source of treatment in both rural and urban locations, although the average expenditure per hospitalisation in the private sector is Rs 25,000, about four times higher than an average of Rs 6,100 in a public hospital.

In Bihar, about 80 per cent of the health expenditure is directly borne by households compared with India's average of 74 per cent or about 55 per cent in Himachal Pradesh, which spends Rs 1,830 per person per year (highest in the country) on health.

Ajay attributed the high dependence on the private sector in Bihar to inadequate public facilities - quantitative and qualitative. "Not a single community health centre in Bihar meets the guidelines of the Indian Public Health Standards," Ajay said. "Every centre is supposed to have seven specialist doctors covering surgery, gynaecology, anaesthesia, and paediatrics, among other disciplines. But none of the 200 centres in the state have all the specialists."

The health ministry's report on the NHRM had last year documented that Bihar has the largest shortfall on community health centres. Ideally, each centre should cater to a population of about 1 lakh, thus Bihar should have about 800 centres. But Bihar has only 200. Similarly, the state should have over 3,000 primary health centres, but has only 1,883. Each rural health sub-centre is expected to cater to about 10,000 people, but each of the state's rural sub-centres caters to a population of about 55,000 people.