Advertisement
Home / India / Restrictions back in Kashmir before UN meet

Restrictions back in Kashmir before UN meet 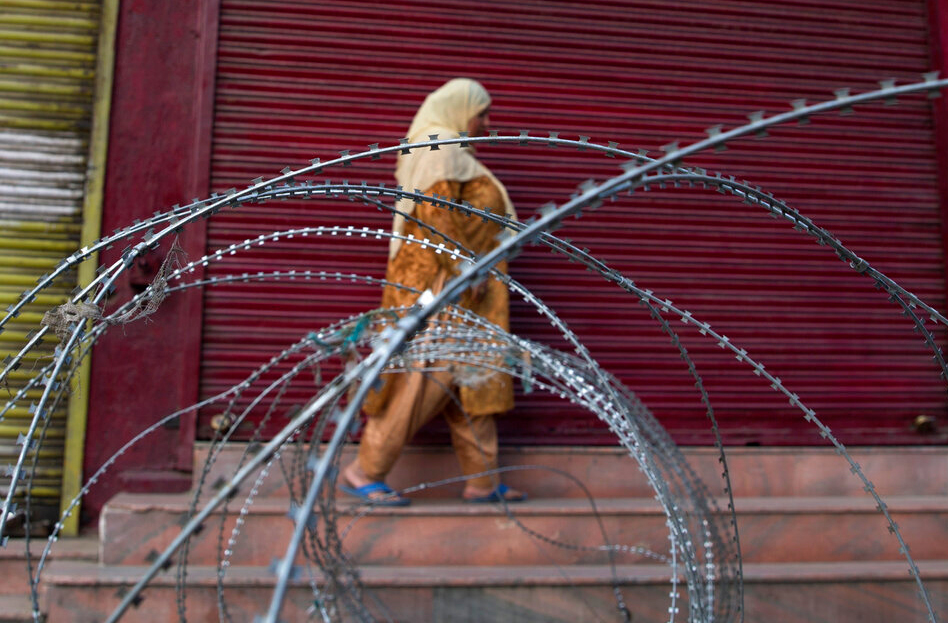 A Kashmiri woman walks past a barbed wire barricade set up by paramilitary soldiers during restrictions in Srinagar on Friday, September 27, 2019.
(PTI)
Our Special Correspondent   |   Srinagar   |   Published 28.09.19, 12:00 AM

Clashes and protests broke out at multiple places in Srinagar as restrictions returned to parts of the city over apprehensions of anti-India agitations ahead of speeches by the Indian and Pakistani Prime Ministers at the UN General Assembly.

The Valley has been anxiously waiting for the session to listen to speeches of Prime Minister Narendra Modi and his Pakistani counterpart Imran Khan.

The authorities have re-imposed restrictions in view of the UN addresses and intelligence inputs about a possible militant attack on some security installations.

Hundreds also took to the streets in the Anchar neighbourhood after Friday prayers. Women and children were part of a procession that marched in the interior lanes and bylanes of the area, waving Pakistani and Pakistan-occupied Kashmir flags. The rally dispersed peacefully.

A resolution was passed at the Jenab Sahab shrine in the area in the presence of a large gathering. Read out by a speaker, the resolution said war was no solution to the Kashmir issue and that it should be resolved according to the wishes of the Kashmiris.

The authorities had deployed large contingents of police and central armed police forces in several other areas of Srinagar to thwart protests. No Friday prayers were allowed for the eighth consecutive week at the historical Jamia mosque in the old city.

Restrictions were re-imposed in Anantnag, Awantipora, Handwara and Kupwara towns.

A police officer said restrictions were re-imposed as “a precautionary measure”.

People remained glued to their television sets to listen to speeches of Modi and Khan in the evening.

Shops and business establishments remained closed across the Valley for the 54th consecutive day. Public transport remained off the roads.

Kashmir has been on edge ever since the scrapping of the special status of the state and its bifurcation into Union Territories.

There was no respite from the crippling communications blockade that has hit life badly in the Valley.